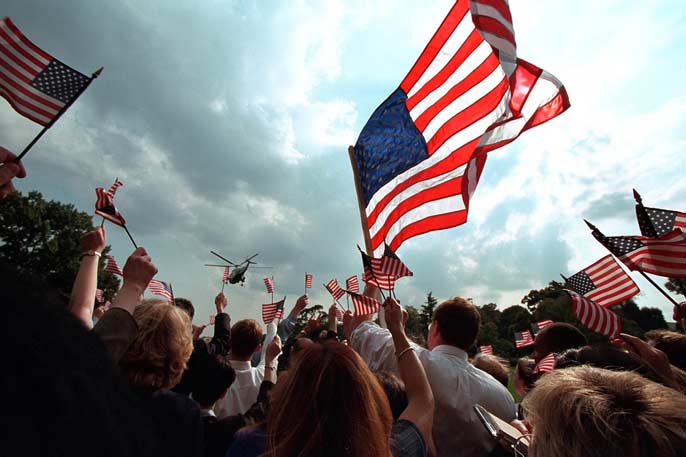 Jared Diamond is professor of geography and environmental health sciences at UCLA. His best-selling books include "The Third Chimpanzee; Guns, Germs, and Steel," which received the 1998 Pulitzer Prize for nonfiction; "Why Is Sex Fun?"; "Collapse"; and, most recently, "The World until Yesterday" (Viking, 2012). This commentary appeared in Governance on Feb. 15, 2014.

Why should we care? Let's remind ourselves of the oft-forgotten reasons why democracy is a superior form of government (provided that it works), and hence why its deterioration is very worrisome. (Of course, I acknowledge that there are many countries in which democracy does not work, because of the lack of a national identity, of an informed electorate, or of both). The advantages of democracy include the following:

Why should we Americans keep reminding ourselves of those fundamental advantages of democracies? I would answer: not only in order to motivate ourselves to defend our democratic processes, but also because increasing numbers of Americans today are falling into the trap of envying the supposed efficiency of China's dictatorship. Yes, it is true that dictatorships, by closing debate, can sometimes implement good policies faster than can the United States, as has China in quickly converting to lead-free gasoline and building a high-speed rail network. But dictatorships suffer from a fatal disadvantage. No one, in the 5,400 years of history of centralized government on all the continents, has figured out how to ensure that a dictatorship will embrace only good policies. Dictatorships also prevent the public debate that helps to avert catastrophic policies unparalleled in any large modern First World democracy — such as China's quickly abolishing its educational system, sending its teachers out into the fields, and creating the world's worst air pollution.

That is why democracy, given the prerequisites of an informed electorate and a basic sense of common interest, is the best form of government — at least, better than all the alternatives that have been tried, as Winston Churchill quipped. Our form of government is a big part of the explanation why the United States has become the richest and most powerful country in the world. Hence, an undermining of democratic processes in the United States means throwing away one of our biggest advantages. Unfortunately, that is what we are now doing, in four ways.

First, political compromise has been deteriorating in recent decades, and especially in the last five years. That deterioration can be measured as the increase in Senate rejections of presidential nominees whose approvals used to be routine, the increasing use of filibusters by the minority party, the majority party's response of abolishing filibusters for certain types of votes, and the decline in number of laws passed by Congress to the lowest level of recent history. The reasons for this breakdown in political compromise, which seems to parallel increasing levels of nastiness in other areas of American life, remain debated. Explanations offered include the growth of television and then of the Internet, replacing face-to-face communication, and the growth of many narrowly partisan TV channels at the expense of a few broad-public channels. Even if these reasons hold a germ of truth, they leave open the question why these same trends operating in Canada and in Europe have not led to similar deterioration of political compromise in those countries as well.

Second, there are increasing restrictions on the right to vote, weighing disproportionately on voters for one party and implemented at the state level by the other party. Those obstacles include making registration to vote difficult and demanding that registered voters show documentation of citizenship when they present themselves at the polls. Of course, the United States has had a long history of denying voting rights to blacks, women and other groups. But access to voting had been increasing in the last 50 years, so the recent proliferation of restrictions reverses that long positive trend. In addition to those obstacles preventing voter registration, the United States has by far the lowest election turnout among large First World democracies: under 60 percent of registered voters in most presidential elections, 40 percent for congressional elections, and 20 percent for the recent election for mayor of my city of Los Angeles. (A source of numbers for this and other comparisons that I shall cite is an excellent recent book by Howard Steven Friedman, The Measure of a Nation). And, while we are talking about elections, let's not forget the astronomical recent increase in costs and durations of election campaigns, their funding by wealthy interests, and the shift in campaign pitches to sound bites. Those trends, unparalled in other large First World democracies, undermine the democratic prerequisite of a well-informed electorate.

A third contributor to the growing breakdown of democracy is our growing gap between rich and poor. Among our most cherished core values is our belief that the United States is a "land of opportunity" and that we uniquely offer to our citizens the potential for rising from "rags to riches" provided that citizens have the necessary ability and work hard. This is a myth. Income and wealth disparity in the United States (as measured by the Gini index of equality/inequality, and in other ways) is much higher in the United States than in any other large First World democracy. So is hereditary socioeconomic immobility, that is, the probability that a son's relative income will just mirror his father's relative income, and that sons of poor fathers will not become wealthy. Part of the reason for those depressing facts is inequality of educational opportunities. Children of rich Americans tend to receive much better educations than children of poor Americans.

That is bad for our economy, because it means that we are failing to develop a large fraction of our intellectual capital. It is also bad for our political stability, because poor parents who correctly perceive that their children are not being given the opportunity to succeed may express their resulting frustration in violence. Twice during my 47 years of residence in Los Angeles, in 1964 and 1993, frustration in poor areas of Los Angeles erupted into violence, lootings, and killings. In the 1993 riots, when police feared that rioters would spill into the wealthy suburb of Beverly Hills, all that the outnumbered police could do to protect Beverly Hills was to string yellow plastic police tape across major streets. As it turned out, the rioters did not try to invade Beverly Hills in 1993. But if present trends causing frustration continue, there will be more riots in Los Angeles and other American cities, and yellow plastic police tape will not suffice to contain the rioters.

The remaining contributor to the decline of American democracy is the decline of government investment in public purposes, such as education, infrastructure, and nonmilitary research and development. Large segments of the American populace deride government investment as "socialism." But it is not socialism. On the contrary, it is one of the longest established functions of government. Ever since the rise of the first governments 5,400 years ago, governments have served two main functions: to maintain internal peace by monopolizing force, settling disputes, and forbidding citizens to resort to violence in order to settle disputes themselves; and to redistribute individual wealth for investing in larger aims — in the worst cases, enriching the elite; in the best cases, promoting the good of society as a whole. Of course, some investment is private, by wealthy individuals and companies expecting to profit from their investments. But many potential payoffs cannot attract private investment, either because the payoff is so far off in the future (such as the payoff from universal primary school education), or because the payoff is diffused over all of society rather than concentrated in areas profitable to the private investor (such as diffused benefits of municipal fire departments, roads, and broad education). Even the most passionate American supporters of small government do not decry as socialism the funding of fire departments, interstate highways, and public schools.

The result is that the United States is losing its former competitive advantage that rested on an educated workforce, science, and technology. Several decades ago, the United States led the world in average years of schooling of its citizens; now, we rank near the bottom of large First World democracies in that respect. Our teachers receive the lowest relative pay among our competitor countries. (German and South Korean teachers receive the highest relative pay). The performance of our students in reading, math, and science is now below the average of that for our competitor countries. American universities and American science output still lead the world, but the margin of our lead is dropping.

All those facts raise a paradox. The United States is the world's richest country. Where, then, is our money going, if it is not being invested by our government in our own future? Part of the answer is: it stays in taxpayers' pockets. Our tax burden is modest by First World standards. The other part of the answer is: toward government expenditure on prisons, military purposes, and health. In all three of those categories, our expenditures far exceed those of other First World democracies. No one could claim that our prisons, which emphasize punishment and deterrence rather than rehabilitation and retraining, constitute investments in our future. Granted, our military expenditures do constitute investments in our future: but why do we spend so much more on our military than does the European Union, whose population is nearly double ours, but whose costs of military protection to ensure its future are shouldered disproportionately by us? As for our expenditures for health, it would seem natural to consider that they represent investments in our future — until one examines their uses and outcomes. In health outcomes the United States ranks below other First World democracies, by measures such as life expectancy and infant and maternal mortality. That is because the United States has especially high health-related expenditures for purposes not leading to healthy outcomes: such as high prescription drug costs, high insurance premiums charged by our for-profit health insurance companies, high costs of medical malpractice insurance and defensive medicine, and expensive emergency room care for our large uninsured population that cannot afford nonemergency care.

What is going to happen to the United States? That will depend upon the choices that we make. On the one hand, our nation enjoys enormous advantages that include much of the world's most productive farmland, the world's largest or second largest reserves of most important minerals, long sea coasts, a large population, the world's largest economy, the highest per capita income among large countries, 230 years of uninterrupted democratic government, and our federal system of 50 states that provide 50 independent opportunities for experimenting with policy innovations. On the other hand, we are presently squandering our advantages, in the ways that I have discussed. Other countries have previously faced acute or else slowly unfolding national crises similar to our current one. Some of those countries, such as Japan in the Meiji era and Britain after World War II, succeeded in painfully adopting big changes that eventually solved their crises. It remains to be seen what we Americans shall do.