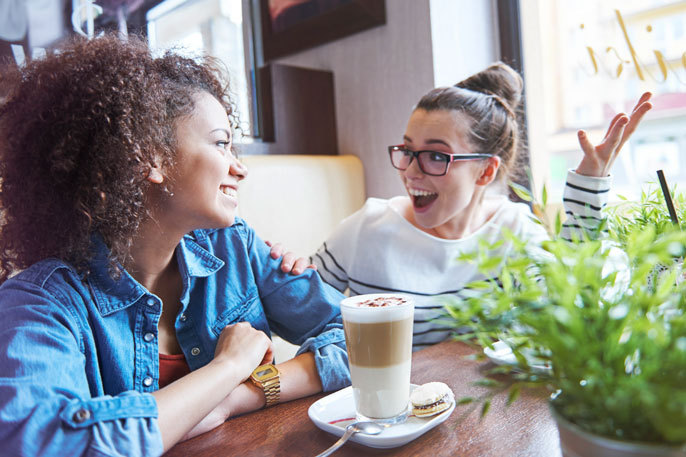 UCLA professor Greg Bryant says the dynamics of simultaneous laughter might hint at important differences in friendship patterns between the sexes.

Hearing other people laugh together, even for just one second, can be enough information to gauge whether or not those people are friends, according to a UCLA study.

The research, co-authored by Greg Bryant, a UCLA professor of communication studies, was published today in the Proceedings of the National Academy of Sciences. It found that the phenomenon holds true in societies around the world — and that when people hear two females laughing together, they are highly likely to assume the women are friends, even when they are not.

Bryant and 32 collaborators across the globe, including Daniel Fessler, a UCLA professor of anthropology, and Riccardo Fusaroli, an assistant professor at the Interacting Minds Center of Aarhus University in Denmark, were interested in better understanding the communicative functions of co-laughter.

They played 48 short audio clips of two people laughing together for 966 listeners from 24 different societies. The listeners included people from hunter-gatherer and other traditional small-scale populations, working-class urban groups, and college students.

The laughter was recorded during conversations between pairs of undergraduate students at UC Santa Cruz — some who were friends and some who were recently acquainted strangers. Recordings captured the simultaneous laughter of two women, two men, and a woman and man together. Overall, listeners from every society could correctly identify whether the people they were hearing were friends or strangers 61 percent of the time.

The scenario in which listeners were best able to judge the relationship correctly was when two women friends were laughing together — listeners were accurate more than 80 percent of the time.

Bryant said he was surprised at how consistently participants, regardless of their cultural backgrounds, presumed that co-laughter between women meant that those women were friends.

“Obviously there is an assumption about female relationships at work,” Bryant said. “People from around the world assume that when two females are laughing together that they are friends. This is consistent with other research showing that women take longer than men to develop friendships that result in genuine co-laughter.”

He added that the dynamics of co-laughter might also hint at important universal differences in friendship patterns between the sexes.

The authors write that the findings shed light on how the evolutionary development of laughter might have facilitated the evolution of cooperation.

“In a highly cooperative species such as ours, it is important for individuals to correctly identify the social alliances of others,” Bryant said. “If laughter helps people accomplish that, it has likely played a role in social communication leading to cooperative interactions.”

The researchers also examined the sound features of the laughs. They found that the clips judged as simultaneous laughter between friends were characterized by greater irregularities in the pitch and loudness of the laughs, as well as faster bursts of sound, all of which are usually associated with excitement and spontaneous, genuine emotion.