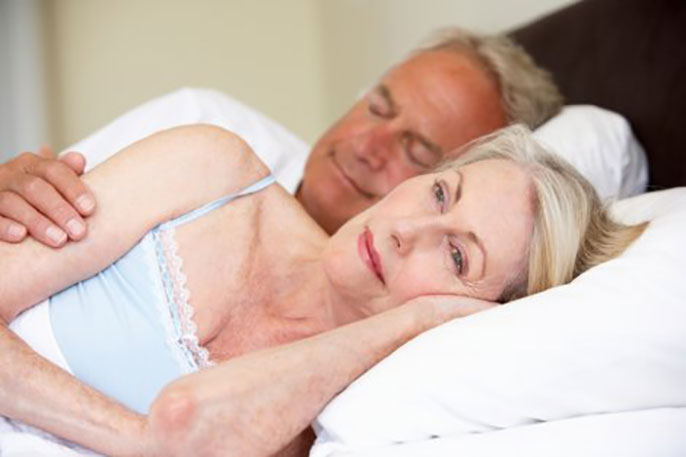 A newly discovered human gene mutation appears to contribute both to unusual sleep patterns and to heightened rates of seasonal depression, according to new research from UC San Francisco.

Although researchers have long suspected links between sleep and depression, the new study — published Feb. 22, in the journal PNAS — is the first to identify a specific molecular-genetic mechanism connecting the two and has the potential to spur new treatments for seasonal depression.

Senior authors Ying-Hui-Fu, Ph.D. and Louis Ptáček, M.D., who are both professors of neurology in UCSF’s School of Medicine, have been studying the genetic basis of sleep for decades, interviewing and genotyping hundreds of families with unusual sleep issues. They’ve studied hyper-efficient sleepers who need just a few hours of shut-eye a night and people with major inherited sleep disturbances, as well as extreme night owls and irredeemable morning larks.

Previously, the team had discovered various mutated genes that cause a rare sleep behavior in which people have a "fast" biological clock. People with this condition, called Familial Advanced Sleep Phase (FASP), go to bed as early as 7:30 p.m. and often wake up by 4:30 a.m.

Now, by studying three members of a family in which many members experience both FASP and seasonal depression, also called Seasonal Affective Disorder (SAD), the researchers have identified a specific gene mutation that occurs in family members who experience both conditions, suggesting that the gene –  PER3, a member of the Period family of circadian genes — appears to sit at the nexus of sleep and mood.

“This is the first human mutation directly linked to seasonal affective disorder, and the first clear sign of a mechanism that could link sleep to mood disorders,” Ptáček said.

Link between sleep and SAD "a big puzzle"

SAD is one of the world’s most common mood disorders, affecting approximately 3 percent of Americans and as many as 9 percent of the population in countries of far northern and southern latitudes, where the shortening of winter days is more extreme. It is not yet known why some people are particularly sensitive to the shortening winter days, but the brain’s light-sensitive circadian clock is thought to be a factor.

Previous research has pointed to a link between sleep and depression more generally: Patients suffering from major depression often begin to sleep much more or less than usual, while disturbed sleep can also be a risk factor for developing depression.

“So far, the evidence has all been circumstantial,” Fu said. “These were all clues, but it was still a big puzzle.”

To understand how the mutated version of PER3 affects circadian rhythms and depression in the wintertime, Fu and Ptáček introduced the mutated form of the gene found in the human FASP family into genetically engineered mice and simulated the effects of changing seasons by altering the length of “day” and “night” mice experienced in the lab.

Remarkably, the mutant mice behaved in many ways like humans with FASP, appearing quite normal when day and night were equal, but shifting their circadian rhythms and developing mild depression-like symptoms when exposed to 4-hour days and 20-hour nights. This shadow of human seasonal depression became even more extreme in the mice when the researchers deleted the PER3 gene completely, but they responded well to antidepressant drugs.

"First real finger-hold on the problem"

The researchers acknowledge that it’s impossible to determine if a mouse is actually experiencing “depression” like a human with SAD would.

“Of course, we can’t do an interview. There’s no questionnaire we can give,” Ptáček said. On the other hand, he said, long-established rodent corollaries of depression – like giving up quickly when placed in adverse circumstances – are still a useful research tool to hint at how this gene may impact mood in humans.

To find out how the mutated PER3 gene might actually impact circadian rhythms and mood at a cellular level, the team introduced the mutation into isolated cells in petri dishes, where they found that the mutated gene produced significantly less PER3 protein than the normal gene. Among the many likely domino effects of this change, the researchers say, is the destabilization of the related PER2 protein, which is known to set the 24-hour period of the biological clock. Loss of this protein, the researchers reasoned, is likely what speeds up the circadian rhythms of in the FASP family.

Why the PER3 mutation affects mood remains an open question, however, one which the researchers are eager to follow up in their seasonally-sensitive mutant mice by studying how brain circuits known to be connected to mood and depression are impacted when the mice are exposed to either long or short days.

“It’s an exciting time,” Fu said. “People have known for decades that light and mood were linked, but this is our first real finger-hold on the problem.”