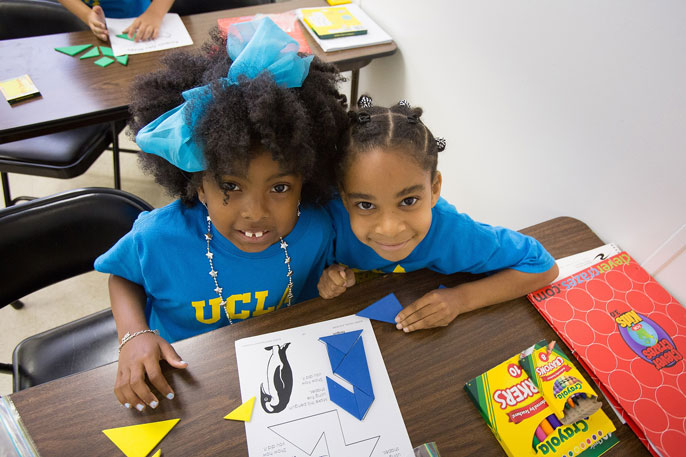 Two of the smiling faces that make up Launch Academy, a unique partnership between the University of California and Bethany Baptist Church of West Los Angeles.

Los Angeles sixth-grader Alana Matthews thinks that someday she might like to be an astronaut. But on a recent morning, she was focused on a more immediate goal: tweaking the designs on a paper rocket to increase how long it could stay in the air.

“You don’t want to make it too heavy or that weighs it down," she said. "You want to make sure the tube is loose enough and the fins are properly in place.”

Matthews is one of 100 elementary and middle school students taking part in a new summer program that aims to launch not just cardboard spaceships but academic futures.

Aptly named Launch Academy, the program involves a unique partnership between the University of California and Bethany Baptist Church of West Los Angeles, a 58-year-old institution with deep roots in the local African American community.

Participants in the program – ranging in age from 4 to 14 – engage in three weeks of math and three weeks of science instruction. After starting the day with a UCLA cheer, students break into age-based groups of 15-20 students. Teachers in the program are graduates of training programs offered through the UC-led California Subject Matter Project, which brings together classroom teachers with educators who are conducting research into how kids learn.

Curriculum guidance and instructional materials are provided by Center X, an educational research and resource center at UCLA’s Graduate School of Education.

Reaching students where they live

Like many other parents, Kadiatou Sibi was struggling to find an affordable and academically-focused summer program for her children when she read about the Launch Academy on Mocha Moms, an area email list for parents of color.

“This is so hopeful for the kids in our community,” said Sibi, whose three kids, ranging in age from 5 to 10, are part of the academy.  “My older son is in fifth grade, and I’ve never seen him so excited about a project at school. He’s like: ‘Mom, I made a flying car. It stayed in the air 3.7 seconds.’”

Top flight educational opportunities like those being offered this summer at Bethany are rare in the community, said Dauwn Parker, a board member at the church that helped organize the program.

“Those parents that really want something academic for their children have always had to travel out of the community,” she said. “This is the first time it’s been right in the neighborhood, in their own backyard.”

Parker first announced the program in an email to the members of the congregation in mid-May. “Once I put it out there, it spread like wildfire.”

Within two weeks, 100 students were signed up for the program, and there were soon many more on the waiting list.

“We had parents at orientation who were crying, they were just so grateful to have this for their children,” Parker said.

Building UC ties with the community

The partnership with Bethany is part of Achieve UC, an initiative of UC President Janet Napolitano to boost California enrollment on UC campuses, especially among underrepresented groups, including African American and Latino students.

Part of the effort focuses on building deeper ties in communities of color through educational partnerships like the one with Bethany.

The long-term goal: change the perceptions of the university in a way that will encourage more high-achieving, underrepresented minority students to pursue a world-class UC education.

Launch Academy is a prime example.

For the youngest students – barely tall enough to reach the classroom whiteboard – it may be years before it’s time to start thinking about, let alone completing, college applications.

But by engaging with students early, the program enables families to see UC as an ally in their kids’ education – not a remote citadel on the hill.

Beyond the blue and gold UCLA T-shirts that are the requisite Launch Academy uniform, UC provides the instructional resources and expertise to turn youngsters into lifelong learners.

At a time when many students lose ground academically – a problem educators refer to as “summer slide”  – Launch Academy uses the academic off-season to build stronger and more confident learners.

“When kids have an opportunity to learn in a hands-on, engaging way, we start to change who can be successful in math and science,” said Carolee Hurtado, director of mathematics programs at UCLA’s Graduate School of Education and Information Studies.  “Kids start to see themselves as good at and enjoying these subjects.”

Teachers are free to engage students in the kinds of open-ended exploration and collaborative problem solving that spark curiosity and an interest in learning.

During the school year, educators are often under pressure to prepare students for standardized tests --  pressures that are particularly strong at underperforming and low-resource schools.

Yet, paradoxically, pressure to elevate scores can result in a narrow, skills-based curriculum that takes much of the joy and discovery out of learning.

“Students rarely get opportunities to present ideas, to engage one another in discussion and to engage in this kind of critical thinking and problem solving,” said Kyndall Brown, director of the California Mathematics Project, based at UCLA, who helped develop Launch Academy’s math program.

Contrast that with what is happening at Bethany on a typical Wednesday afternoon.

In one classroom, third-graders use averages to determine whether Life Savers or Styrofoam make for better wheels on balloon-powered vehicles. In another, first-graders are working together to build giant block towers and solve geometric puzzles using cutout shapes.

The result: even kids who at first grumbled about spending some of their summer in a classroom are now eager to be dropped off in the morning.

“By giving the sense that learning can be fun, we’re really building the foundation for individuals who can be successful in the long run,” said Bethany’s Parker. “If you can create that hunger for learning, you will have a different individual.”

It’s a change that moms like Siba have noticed.

“It’s amazing what these kids are doing,” she said, as she kissed her kids goodbye at the door. “We might have the next Elon Musk or Bill Gates in there.”