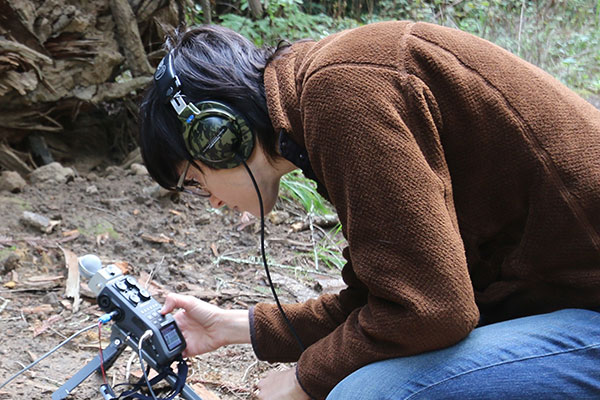 In work that brings musicians together with environmental scientists, UC Santa Cruz digital arts grad student Andrea Steves and her colleagues are using soundscapes to document changes in the environment.

Throughout the halls of the Capitol today, graduate students are meeting with lawmakers to share their expertise such as how to conserve water in California aqueducts or engineer bacteria to produce biofuels.

Their aim is not to make elected officials armchair experts in subjects like civil engineering and cell biology. Rather, it is to educate lawmakers about the value of graduate research, and why that work matters to the lives and livelihoods of Californians.

“Many people have an image of a Ph.D. student as someone who is closeted away in a library or lab, far from the concerns of everyday life,” said UC Irvine graduate dean Frances Leslie, who co-chairs UC’s annual Graduate Research Day at the Capitol.

“In fact, UC’s 26,000 master's and doctoral students are at the forefront of many of the most pressing issues – and most revolutionary advances – in health, transportation, energy, the environment and other areas.”

UC President Janet Napolitano will join a delegation of graduate deans and at least two graduate students from each UC campus in meeting with legislators. Altogether, students will visit the offices of almost 90 members of the state Assembly and Senate.

A crucial segment of the UC research powerhouse

The advocacy event increases the visibility of an often overlooked segment of UC’s research powerhouse – 26,000 master's and Ph.D. students who are the driving force behind startups, new inventions and millions of research dollars that flow into UC.

Graduate students also play a huge role in educating undergraduates, serving as mentors and teaching assistants to roughly 200,000 students across the UC system.

The university has committed to expanding its student body by 10,000 more California undergraduates over the next three years. To help ensure adequate instructional support for those new students, it is asking the state for an additional $6 million in annual support, which would allow UC to enroll an additional 600 graduate students.

Napolitano and others make a strong case that California gets a big return on investment for those dollars: UC graduate students develop nearly 600 inventions a year – an average of 10 each week. They are also responsible for more than half of all of the startups to emerge from UC. Roughly two new companies a week are founded by graduate students or emerge directly from their inventions.

The strength of UC graduate programs also helps California lead the nation in attracting funding from the National Institutes of Health and National Science Foundation, and has made California ground zero for leading-edge research into cancer and Alzheimer’s disease.

Proof in the pudding

The delegates themselves offer a more personal illustration of how the state’s investment in graduate education pays off.

“Where else but graduate school could I take an idea that was far-fetched and crazy, and see if I could make it work?” said UC Irvine chemical engineering student Julius Edson. He is looking to commercialize a technology he has developed that employs finely ground up shrimp shells to destroy drug-resistant bacteria.

“One mile of shading could save millions of gallons per year in water lost to evaporation,” he said. “And there is potential to do this for all the canals in California – that’s 3,000 miles’ worth.”

Beyond headline-grabbing startups and research breakthroughs, UC graduate students often are the ones doing the unglamorous, shoe-leather investigation that informs data-driven public policy.

UC Davis transportation technology grad student Hanjiro Ambrose, for example, is taking a microscope to fuel-efficient vehicles. His analysis looks at whether the reductions in greenhouse gas that occur when these vehicles are on the road are offset by the more carbon intensive materials used in their production. “When we look at emissions, we tend to focus on what comes out of the tailpipe,” he said. “But that perspective is so limited. We can make better choices when we have the whole picture.”

UCLA civil engineering grad student Michelle Miro combines satellite imagery with monitoring data from local wells to map hotspots for groundwater depletion around the state. “Well data is really specific, but it covers a small area, while the satellite imaging is really big, but it offers little detail,” she said. “Combining the two, we can get a clearer picture of how and where groundwater is changing in California, particularly in the Central Valley.”

For graduate students like UC San Diego biological scientist Benjamin Rubin, years of scientific toil are driven by a childlike desire: to take stuff apart and see how it works.

Rubin uses a transposon – a new, slightly sci-fi technology that breaks genes into pieces by zapping them with electricity – to understand the basic mechanisms that animate bacteria.

“I’m like the kid breaking the wheels off of a toy car to see how it moves,” he explained.  “We want to see, what are the weight-bearing walls? What are the things you can’t break, which are the essential components for the organism’s survival?”  That understanding could help scientists in the emerging field of synthetic biology create new medicines, better biofuels and more.

“Once we know how the organisms function, we can use them as a production platform for all kinds of useful and valuable things,” Rubin said. “But to do this, we have to understand really well how they work.”