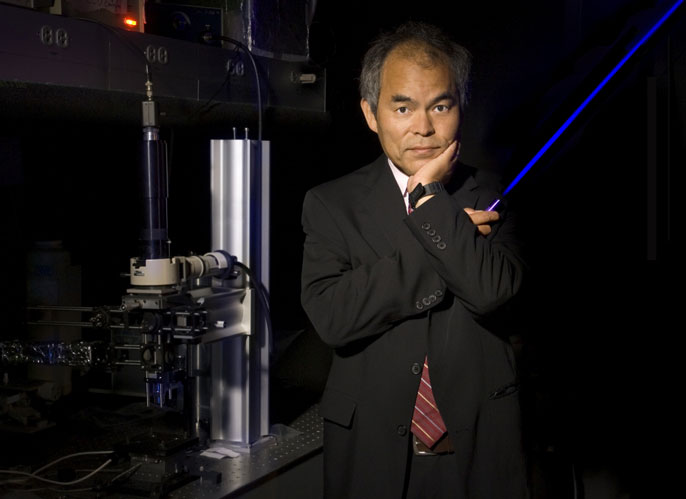 Shuji Nakamura, Nobel laureate in physics, is one of several UC scholars who will be honored by the Carnegie Corporation of New York on July 4 for their contributions to the nation.

Of all the Nobel Prize winners in the United States, roughly a third are — or have been — immigrants. At UC Santa Barbara, four of the campus’s six Nobel laureates are foreign born. Among them is UC Santa Barbara professor Shuji Nakamura of Japan, who won the 2014 Nobel Prize in Physics for inventing the bright-blue LED.

He is one of 38 naturalized citizens whose contributions to the U.S. will be celebrated by the Carnegie Corporation of New York as part of its annual “Great Immigrants” tribute. The honorees will be recognized with a full-page public service announcement in the New York Times on July 4.

“It is a great honor to be selected for the Great Immigrant Award by the Carnegie Corporation of New York,” Nakamura said. “Andrew Carnegie was an innovative thinker — an entrepreneur, an investor and a famous philanthropist. I admire his accomplishments from over a century ago. The United States has given me the freedom to continue my pursuit of innovative research, and I am honored to be a citizen.”

Born in 1954 in Ehime, Japan, Nakamura spent the first segment of his life there, completing his bachelor’s, master’s and doctoral degrees in electrical engineering from the University of Tokushima, and working at Nichia Chemical Industries, Ltd. In 1989, he began his work on the blue LED, which at the time was the final piece of the puzzle in creating the white LED. He eventually developed the first group-III nitride-based blue/green LEDs and, in the 1990s, the first group-III nitride-based violet laser diodes.

To continue his work, Nakamura came to the United States. Joining the UC Santa Barbara faculty in 2000, he was appointed to the Cree Chair in the Solid-State Lighting and Display Center (now the Solid State Lighting & Energy Electronics Center) in 2001. In the years that followed, Nakamura continued to push the boundaries in solid state lighting and win recognition for his work. He also attained citizenship in his new home country.

In 2014, Nakamura, with fellow Japanese inventors Isamu Akasaki and Hiroshi Amano, won the Nobel Prize in physics for the blue LED. The technology has enabled highly efficient, durable and high quality solid state lighting all over the world.

“We at the UC Santa Barbara College of Engineering are extremely proud of Shuji Nakamura for being recognized as a Great Immigrant by the Carnegie Corporation,” said Dean Rod Alferness. “Since coming to the United States seeking richer personal and professional expression, Shuji has continued to illuminate the world with his unending innovations in solid-state lighting, and has earned a Nobel Prize along the way. His generous demeanor and tremendous impact remind us daily of the value he and immigrants from around the world bring to our college, our university, and our nation. We are thankful that Shuji is part of our campus and are delighted to see him so fittingly recognized with the other 37 Great Immigrants for 2018.”

Every Fourth of July since 2006, the Carnegie Corporation has sponsored the public awareness initiative to commemorate the legacy of its founder, Scottish immigrant Andrew Carnegie, who believed strongly in both immigration and citizenship. Today the Great Immigrants tribute is an archive of accomplishment featuring more than 500 exemplary naturalized U.S. citizens. For 2018, the honorees represent nearly 30 different countries of origin, a range of personal immigration experiences and high-level leadership in numerous fields, all of them united through their experience of becoming Americans.

The philanthropic organization’s online tribute to its newest honorees can be found here: https://www.carnegie.org/news/articles/july-fourth-tribute-carnegie-corporation-new-york-recognizes-contributions-38-distinguished-immigrants/.