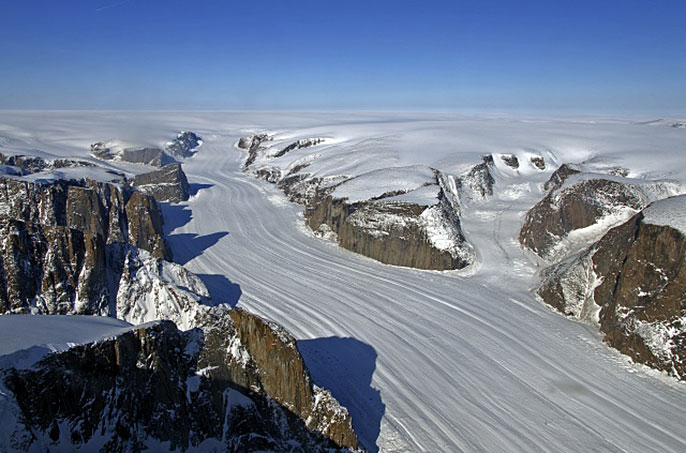 A glacier in the Sukkertoppen ice cap in southwest Greenland flows down a rocky canyon like those mapped in a new UCI-NASA study. Hundreds of previously unknown coastal canyons buried under the ice could contribute to far higher sea level rise than previously predicted.

Greenland’s icy reaches are far more vulnerable to warm ocean waters from climate change than had been thought, according to new research by UC Irvine and NASA glaciologists.

The work, published today (May 19) in Nature Geoscience, shows previously uncharted deep valleys stretching for dozens of miles under the Greenland Ice Sheet.

The bedrock canyons sit well below sea level, meaning that as subtropical Atlantic waters hit the fronts of hundreds of glaciers, those edges will erode much further than had been assumed and release far greater amounts of water.

Ice melt from the subcontinent has already accelerated as warmer marine currents have migrated north, but older models predicted that once higher ground was reached in a few years, the ocean-induced melting would halt. Greenland’s frozen mass would stop shrinking, and its effect on higher sea waters would be curtailed.

“That turns out to be incorrect. The glaciers of Greenland are likely to retreat faster and farther inland than anticipated — and for much longer — according to this very different topography we’ve discovered beneath the ice,” said lead author Mathieu Morlighem, a UC Irvine associate project scientist. “This has major implications, because the glacier melt will contribute much more to rising seas around the globe.”

To obtain the results, Morlighem developed a breakthrough method that for the first time offers a comprehensive view of Greenland’s entire periphery. It’s nearly impossible to accurately survey at ground level the subcontinent’s rugged, rocky subsurface, which descends as much as 3 miles beneath the thick ice cap.

Since the 1970s, limited ice thickness data has been collected via radar pinging of the boundary between the ice and the bedrock. Along the coastline, though, rough surface ice and pockets of water cluttered the radar sounding, so large swaths of the bed remained invisible.

Measurements of Greenland’s topography have tripled since 2009, thanks to NASA Operation IceBridge flights. But Morlighem quickly realized that while that data provided a fuller picture than had the earlier radar readings, there were still major gaps between the flight lines.

To reveal the full subterranean landscape, he designed a novel “mass conservation algorithm” that combined the previous ice thickness measurements with information on the velocity and direction of its movement and estimates of snowfall and surface melt.

The difference was dramatic. What appeared to be shallow glaciers at the very edges of Greenland are actually long, deep fingers stretching more than 100 kilometers (almost 65 miles) inland.

“We anticipate that these results will have a profound and transforming impact on computer models of ice sheet evolution in Greenland in a warming climate,” the researchers conclude.

Other co-authors are Jeremie Mouginot of UC Irvine and Helene Seroussi and Eric Larour of JPL. Funding was provided by NASA.