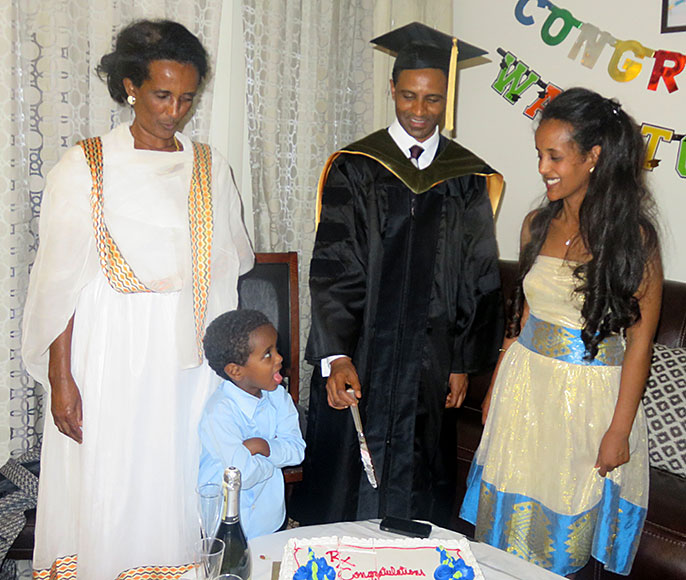 In the state of Tigray in northern Ethiopia, poverty and unemployment were rampant and very few had the fortune to go to college. But Getahun Weldeselassie nevertheless banked on education as his best shot at a better life.

He scarcely could have imagined just how far his ambition and luck would take him.

Last month, Weldeselassie completed the doctor of pharmacy at UCSF. Now a U.S. resident who lives in San Francisco with his wife and young son, he looks forward to a career that offers personal satisfaction while providing a stable livelihood for himself and his family.

“I firmly believed in education as something that could change my life, as well as my family’s,” he said.

It was a belief he maintained in face of startlingly long odds. “I came from a very poor state in Ethiopia, and even there, I was from a poor family,” said Weldeselassie. “Opportunities were very, very narrow. Only the top students could go to college, and the chances were very slim."

Yet from the time he entered first grade, he “was always very determined, always a high achiever,” Weldeselassie said. His mother encouraged him, convinced the youngest of her five children had the right stuff to make it on to higher education and out of the hardscrabble existence he was born into.

In the city of Korem, where Weldeselassie lived, jobs were scarce and the area was not even suitable for growing food. For most, getting by was a hand-to-mouth business of acquiring work when and where it could be found. “The majority of people were unemployed and helpless,” he said.

The year he finished high school, only two students from his school were selected to go on to Jimma University, Ethiopia’s leading public institution for higher education.

One of them was Weldeselassie.

He was thrilled when he learned of his course of study: “The government assigns us what they have available,” he said. “Some students with the same GPA were assigned to study agriculture. I was assigned to study pharmacy.” In addition to having an interest in the subject, Weldeselassie believed it promised a better career.

Another stroke of luck

Weldeselassie was completing his bachelor’s degree when good luck delivered an even greater surprise. He learned he had won the lottery — specifically, the U.S. Diversity Visa Lottery, which awards 50,000 green cards a year to people from countries with low immigration to the U.S. Roughly 10 million people worldwide participate in the program, including hundreds of thousands from Ethiopia.

Weldeselassie had pulled the golden ticket.

Still, cashing in on the opportunity was a mixed blessing. The decision to leave behind his family and everything he knew was heart wrenching.

Shock of the new

Arriving in the Bay Area, where he joined a friend who was a nurse at San Francisco General Hospital, “was shocking at the beginning,” he said. “I didn’t have any exposure to the outside world beyond Ethiopia,” he said.

Weldeselassie worked at a garage before getting a job at UCSF. He began commuting to UC Merced, where he earned an undergraduate degree in 2008.

He enrolled at UCSF School of Pharmacy in 2011.

Now, at last embarking on his long-sought career in pharmacy, he hopes to use his own experience to care for people who are low-income and new to this country.

“We can make service much better when we understand the patient,” he said. When it comes to struggling to make ends meet or to adapt to life in new a country, he said, “I’ve been through it. I completely understand what those needs are.”