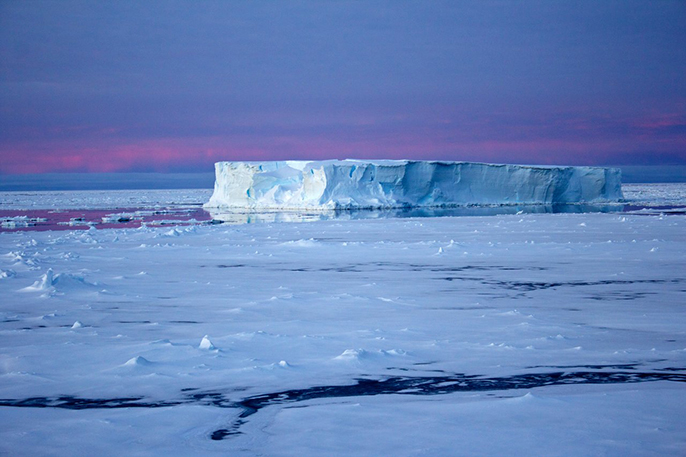 An iceberg surrounded by sea ice in the Antarctic.

A team of scientists led by Ian Eisenman of Scripps Institution of Oceanography, UC San Diego, said that much of the increase measured for Southern Hemisphere sea ice could be due to a processing error in the satellite data.

Arctic sea ice is retreating at a dramatic rate. In contrast, satellite observations suggest that sea ice cover in the Antarctic is expanding – albeit at a moderate rate – and that sea ice extent has reached record highs in recent years. What’s causing Southern Hemisphere sea ice cover to increase in a warming world has puzzled scientists since the trend was first spotted. Now, a team of researchers has suggested that much of the measured expansion may be due to an error, not previously documented, in the way satellite data was processed.

“This implies that the Antarctic sea ice trends reported in the Intergovernmental Panel on Climate Change’s (IPCC’s) AR4 and AR5 [the 2007 and 2013 assessment reports] can't both be correct: our findings show that the data used in one of the reports contains a significant error. But we have not yet been able to identify which one contains the error,” said Eisenman.

The findings will be published July 22 in The Cryosphere, a journal of the European Geosciences Union (EGU) (Images and a pre-print copy of the paper are available at EGU's website).

Reflecting the scientific literature at the time, the AR4 reported that Antarctic sea ice cover remained more or less constant between 1979 and 2005. On the other hand, recent literature and the AR5 indicate that, between 1979 and 2012, Southern Hemisphere sea ice extent increased at a rate of about 16,500 square kilometers (6,370 square miles) per year. Scientists assumed the difference to be a result of adding several more years to the observational record.

“But when we looked at how the numbers reported for the trend had changed, and we looked at the time series of Antarctic sea ice extent, it didn't look right,” said Eisenman, who set out to figure out what was wrong.

Scientists have used satellite data to measure sea ice cover for 35 years, but the data don’t come from a single instrument, orbiting on a single satellite throughout this period. Instead, researchers splice together observations from different instruments flown on a number of different satellites. They then use an algorithm – the most prevalent being the ‘Bootstrap algorithm’ – and further processing to estimate sea ice cover from these data.

Eisenman and collaborators Walter Meier of NASA Goddard Space Flight Center in Greenbelt, Md. and Joel Norris, also of Scripps Oceanography, compared two datasets for sea ice measurements. The most recent one, the source of AR5 conclusions, was generated using a version of Bootstrap updated in 2007, while the other, used in AR4 research, is the result of an older version of the algorithm.

The researchers found a difference between the two datasets related to a transition in satellite sensors in December 1991 and the way the data collected by the two instruments were calibrated.

“It appears that one of the records did this calibration incorrectly, introducing a step-like change in December 1991 that was big enough to have a large influence on the long-term trend,” said Eisenman.

“You'd think it would be easy to see which record has this spurious jump in December 1991, but there's so much natural variability in the record – so much ‘noise’ from one month to the next – that it's not readily apparent which record contains the jump. When we subtract one record from the other, though, we remove most of this noise, and the step-like change in December 1991 becomes very clear.”

With the exception of the longer time period covered by the most recent dataset, the two records were thought to be nearly identical. But, by comparing the datasets and calculating Antarctic sea ice extent for each of them, the team found that there was a stark difference between the two records, with the current one giving larger rates of sea ice expansion than the old one in any given period.

If the error is in the current dataset, the results could contribute to an unexpected resolution for the Antarctic sea ice cover enigma.