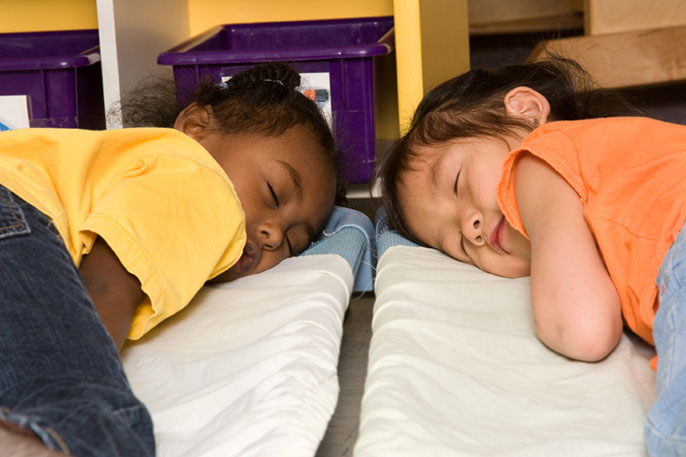 A new study of preschools and day care centers finds that flame retardants are prevalent indoors, potentially exposing young children to chemicals known to be hazardous.

The study, published online today (May 15) in the journal Chemosphere, was led by researchers at UC Berkeley and funded by the California Air Resources Board. Although many infants and young children spend up to 50 hours per week in day care, the study authors noted that this paper represents the first systematic review of flame retardants in early child care settings.

The researchers covered 40 child care centers serving 1,764 children in Monterey and Alameda counties. The facilities were located in a mix of urban, rural and agricultural areas. The researchers collected air and floor dust samples when the children were present, and tested for 14 different PBDEs, or polybrominated diphenyl ethers, and four non-PBDE flame retardants, including tris phosphate compounds.

The study found both PBDEs and tris phosphate compounds in 100 percent of the dust samples collected. Median levels of PBDEs were somewhat lower than those found in homes in other studies, but median levels of chlorinated tris were similar to or higher than household levels found in previous studies.

“These findings underscore how widespread these materials are in indoor environments,” said study lead author Asa Bradman, associate director of the Center for Children’s Environmental Health Research at UC Berkeley. “A growing body of research has found links between flame retardants and a range of human health effects, including neurodevelopmental delays in children. Children are more vulnerable to the health effects of environmental contaminants, so we should be particularly careful to reduce their exposure to harmful chemicals.”

While flame retardants were commonplace in dust, the good news is that levels of the chemicals were generally low in air samples.

Of the facilities surveyed, 29 had upholstered furniture and 17 had napping equipment that contained foam. Facilities with foam products had significantly higher concentrations of flame retardant chemicals than the centers without such equipment.

In response to growing health concerns about these chemicals, California banned the use of two types of PBDEs in 2006. Furniture manufacturers also began phasing them out, but products made before the ban are still found in many buildings.

The detection of the older class of flame retardants was more surprising. In the 1970s, UC Berkeley work by Arlene Blum, a postdoctoral researcher at the time, and Bruce Ames, UC Berkeley professor of molecular and cell biology, showed that brominated and chlorinated tris were mutagens and presumed carcinogens. That work helped lead to the chemicals’ removal from children’s sleepwear.

“I remember learning about the tris phosphate flame retardants in kids’ pajamas when I was in high school 35 years ago, so it’s a bit surprising to still be seeing them today,” said Bradman. “They were never banned. There seems to have been a resurgence in recent years as manufacturers looked for PBDE replacements.”

New changes in state flammability standards may soon eliminate the need to use those chemical replacements. Previous regulations required the foam in consumer items to withstand a small open flame for 12 seconds without igniting.

Blum, now executive director of the Green Science Policy Institute and a UC Berkeley visiting scholar in chemistry, noted that the old standard, known as TB117, did not help fire safety since it is the fabric covering the foam that needs to be fire resistant. The standard, she noted, had led to the extensive use of flame retardants in furniture and foam baby products without providing a fire safety benefit.

Gov. Jerry Brown, presented with evidence that the flame retardant chemicals are linked to health concerns, ordered an update to the state flammability standard. The new regulation, TB117-2013, requires fabrics of upholstered furniture to withstand smolders, such as from lit cigarettes. It takes effect this year, and will be mandatory by January 2015.

“The new standard is not a ban on flame retardants, but manufacturers can meet it without using the chemicals,” said Blum, who is not an author on the current study. “Most upholstered fabrics, such as leather, are already smolder-proof. Consumers should verify that the furniture they are buying is free of flame retardants, especially when children will be exposed.”

Other co-authors of the study include researchers from  the Battelle Memorial Institute in Ohio, the U.S. Environmental Protection Agency, the Lawrence Berkeley National Laboratory and the California Air Resources Board.