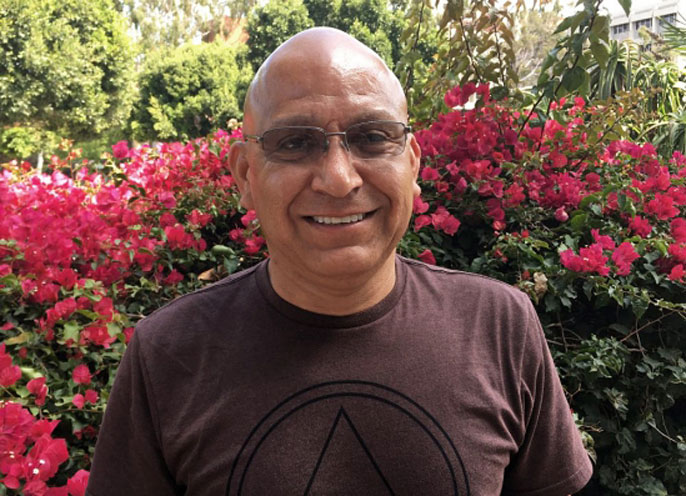 Luck is often more than random good fortune; it’s the product of vision and planning. Just ask Ruben Maldonado. A few years ago he worked for General Motors as a manager, putting in nearly 20 years. It was a bad time for the company — Maldonado called it “chaos” — and he knew his ride was coming to an end.

“I have to do something here,” he said to himself. “I don’t want to be one of those guys walking out the door with a pink slip and no plan. I knew it was going to come.”

One day he was bringing his son Adam back to UC Santa Barbara for the young man’s sophomore year. On the ride up from Los Angeles Adam turned to his dad and said, “When are you going to follow your dreams? When are you going to practice what you preach? You’ve put us all through college, Dad.”

Maldonado soon enrolled at L.A. Mission College and, two years later, had acceptance letters from UC Irvine, Cal State L.A., Cal State Northridge — and UC Santa Barbara. A couple of weeks after those letters arrived, he got called into a meeting at GM. It was just him and people from human resources. He walked out with a severance package, unemployment benefits and his 401(k).

“Oh my goodness,” he said, “this couldn’t have happened at a better time.”

Fast-forward one year. Today Maldonado, a 53-year-old father of five, is entering his senior year at UC Santa Barbara as a cultural anthropology major. The former Marine is a fixture at the campus’s Transfer Student Center, which offers a plethora of services to students coming in from other schools, mostly community colleges.

The center is a haven for transfer students, most of whom will confess to being intimidated and a little overwhelmed at finding themselves on the beachside campus of more than 20,000 students. Maldonado was no different — he was just 30 years older than his classmates. “It’s really intimidating at some point,” he said. “You’re like, ‘Wow, what am I doing in here?’”

And for someone who’d been out of school for decades, the academic pressures of attending a top-tier university were formidable. Maldonado said he had to “learn how to learn, and that was a challenge. I was like, ‘Man, do I even belong here? I don’t even get this.’ I struggled my first quarter. ‘What? I got a C-minus? What the heck is that?’ ”

With the help of the transfer center and others, Maldonado pulled it together to become a successful student. He credits a class, Education 118, with helping him navigate his first year. The course, taught by Don Lubach, associate dean of students and director of first-year and graduate student initiatives, helps prepare transfer students for the rigors and opportunities of life at UC Santa Barbara.

“Faculty love a ‘coachable’ scholar,” Lubach said. “Ruben’s many years as a baseball coach have made him a model student/scholar. He sits near the front of every class, assists other students by helping them to discover connections and find their voices, and he asks for feedback. I hope Ruben’s story will result in more re-entry students coming to UC Santa Barbara.”

It also helped that Maldonado, who lives in Family Student Housing, had family close that first year. His son Adam, who lived in Isla Vista, was a senior and had dinner with him once or twice a week. But other than that, their lives as students had little overlap.

“I thought it’d be a little awkward for him maybe,” Maldonado said, “but we didn’t really see each other on campus at all.”

With a year on campus under his belt, Maldonado said the key to transitioning from transfer student to full-fledged Gaucho is to go all-in. “Just dive in,” he said. “You can sit on the lounge chairs and watch, you can put your feet in and wade, or you can just strip off your shirt and dive right in. Once you get here it’s intimidating, but you have to go forward with your goals and become part of your environment.”