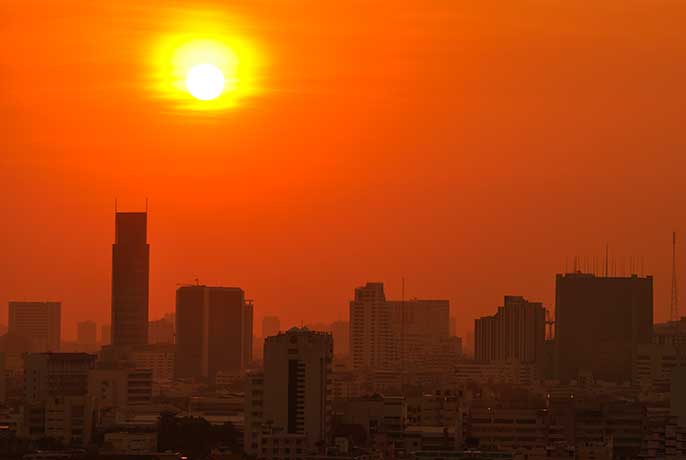 Prolonged periods of extreme heat increased significantly between 1973 and 2012 in almost half of the urban areas the researchers analyzed.

Cooling down the neighborhood with smart pavement

On sweltering days you can fry an egg on them. But now, Lawrence Berkeley Lab and UC Davis researchers are testing surfaces designed to make them cooler and safer. Watch the video.

The frequency of heat waves has increased dramatically over the past 40 years, and the trend appears to be growing faster in urban areas than in less-populated areas around the world, a new study suggests.

“Our findings suggest that urban areas are experiencing a kind of double whammy — a combination of general climatic warming combined with the heat island effect, wherein human activities and the built environment trap heat, preventing cities from cooling down as fast as rural areas,” said Dennis Lettenmaier, a co-author of the study and a UCLA geography professor. “Everything’s warming up, but the effect is amplified in urban areas.”

Lettenmaier and his co-authors studied 217 urban areas across the globe and found that prolonged periods of extreme heat increased significantly in 48 percent of them between 1973 and 2012.

The results, which were published today (Jan. 29) in the journal Environmental Research Letters, show that about only 2 percent of those urban areas experienced a significant decline in heat waves. And the change was more dramatic at night: Almost two-thirds of the urban areas showed significant increases in the frequency of extremely hot nights.

“The fact that the trend was so much stronger at night underscores the role of the heat island effect in urban areas,” Lettenmaier said. “You have heat being stored in buildings and in asphalt, concrete and other building materials, and they don’t cool down as quickly as they would outside of the urban area. This effect was likely exacerbated by decreasing wind in most of the urban areas.”

Lettenmaier collaborated with researchers at the Indian Institute of Technology Gandhinagar, Northeastern University and the University of Washington. The team obtained daily observations for rain, air temperature and wind speed from the National Oceanic and Atmospheric Administration. The researchers identified about 650 urban areas with populations greater than 250,000 and then refined the list to the 217 locales based on the areas’ proximity to weather stations with complete weather records and NOAA data — most were located at airports close to urban areas. Although the researchers would have liked to have more data for urban areas in Africa, Lettenmaier said the report provides as close as possible to a representative sample of changing weather conditions in the world’s cities.

For each of the locales in the study, the researchers identified extremes for temperature, precipitation and wind, calculated heat and cold waves, and pinpointed individual extremely hot days and nights.

The study defined heat waves as periods in which the daily maximum temperature was hotter than 99 percent of days for the four-decade period and in which those temperatures were sustained for a consecutive period of six or more days. (The median length of heat waves was eight days.) It found that the average number of heat waves per year increased by over 50 percent during the period.

Of the five years with the largest number of heat waves, four were the most recent years for which data was available: 2009, 2010, 2011 and 2012. Urban areas in South America experienced the greatest increase in frequency of heat waves, followed in order by those in Africa, Europe, India and North America.

“Urban areas make up a relatively small part of the global land area, but over half the world’s populations now live in them, so the trend is troublesome,” said lead author Vimal Mishra, an assistant professor of civil engineering at IIT Gandhinagar. “The combination of higher temperatures and lower wind in particular is not a good combination for human health and well-being. This should concern everyone.”

“In urban areas, buildings are disrupting the air flow, which affects not only the immediate area of buildings, but apparently the larger regional wind fields,” Lettenmaier said. “The reduction in wind may well be exacerbating the heat island effect.”