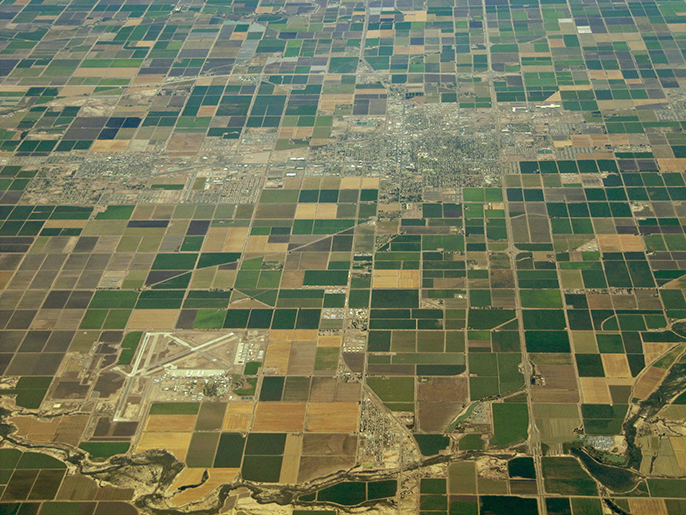 High temperature agricultural regions are prevalent in the southern United States and the rest of the world and will become even more common with future warming.

However, high temperature environments (roughly defined as high temperatures above 95 degrees) present a challenge related to nitrogen, a common agricultural fertilizer. Those regions lose an unusual amount of nitrogen to the air.

This creates two big problems. One, farmers need to use more fertilizer, which is an added cost for them. Two, the fertilized soils produce large amounts of nitrogen oxides, which when released into the air plays an important role in the formation of ozone, a toxic air pollutant, and increases greenhouse gas emissions.

A team of scientists, led by Darrel Jenerette, a UC Riverside landscape ecologist, is addressing those problems. They have shown that modifying fertilization and irrigation practices in high temperature environments can reduce losses of nitrogen to the atmosphere by 50 percent.

Now, they have received a three-year, $500,000 grant from the National Institute of Food and Agriculture to further the work. They have three objectives:

“High temperature agriculture practices are underappreciated,” said Jenerette, an associate professor in the Department of Botany & Plant Sciences. “It is remarkable how different they can be compared to agriculture in temperate regions.”

With the grant funding, the researchers will conduct continuous, automated chamber measurements of nitrous oxide and nitrogen oxides in fields of alfalfa and sorghum, both common summertime crops, in the San Joaquin Valley and Imperial Valley in California. (The research will focus exclusively on summer crops, which are grown when temperatures are highest. Average high temperatures in the Imperial Valley during the summer are about 105 degrees.)

The researchers will test the effectiveness of different management techniques, such as: using lower amount of nitrogen fertilizer; applying nitrogen more frequently; using more organic fertilizers, such as urea; applying the fertilizer on the side instead of the top; and reducing the amount of flood irrigation.

Both of these papers highlight how episodic soil wetting and subsequent drying lead to the occurrence and magnitude of “pulsed” biogeochemical activity.

While working in the Imperial Valley, the researchers found some of the highest soil nitrogen oxide emissions ever observed, exceeding previous measurements in agricultural and natural ecosystems and more than 68 times greater than predicted by standard models. The researchers found that soil nitrogen oxide emissions are capable of influencing regional air quality and can have a large contribution to greenhouse gas emissions.

Others involved with the grant are: Jun Wang and Cue Ge, both at the University of Iowa, and Patricia Oikawa of California State University, East Bay.