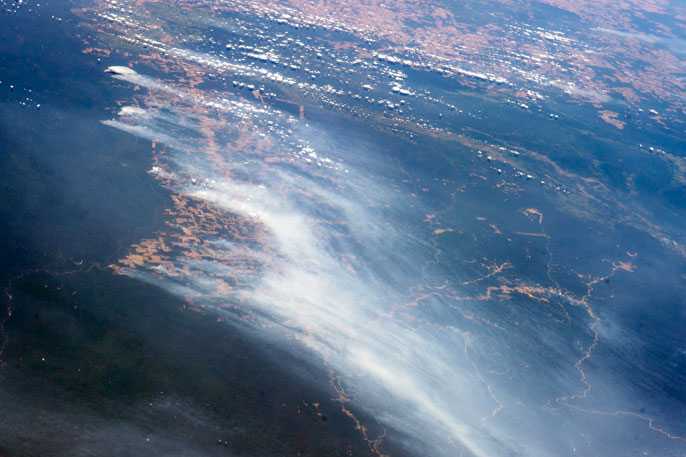 The smoke from multiple fires in the Mato Grosso region of Brazil rises over forested and deforested areas in this astronaut photograph taken from the International Space Station on August 19, 2014.

The long-lasting effects of El Niño are projected to cause an intense fire season in the Amazon, according to the 2016 seasonal forecast from scientists at NASA and the University of California, Irvine.

El Niño conditions in 2015 and early 2016 altered rainfall patterns around the world.  In the Amazon, El Niño reduced rainfall during the wet season, leaving the region drier at the start of the 2016 dry season than any year since 2002, according to NASA satellite data.

“It’s the driest we’ve seen it at the onset of a fire season, and an important challenge now is to find ways to use this information to limit damages in coming months,” said Jim Randerson, Chancellor’s Professor of Earth system science at UC Irvine. He developed the forecast methodology with UC Irvine research scientist Yang Chen and colleagues at NASA Goddard Space Flight Center. “Just as El Nino is known to have an impact on precipitation in the western United States, it also affects the Amazon, but in that case it causes drier conditions.”

“Severe drought conditions at the start of the dry season set the stage for extreme fire risk in 2016 across the southern Amazon,” Morton said.

The forecast uses the relationship between climate and active burn detections from NASA satellites to predict fire season severity during the region’s dry season. Developed in 2011, the forecast model is focused particularly on the link between sea surface temperatures and fire activity. Warmer sea surface temperatures in the tropical Pacific (El Niño) and Atlantic oceans shift rainfall away from the Amazon region, increasing the risk of fires during dry season months.

The team also uses data on terrestrial water storage from a joint NASA/German mission to follow changes in groundwater during the dry season. Satellite measurements serve as a proxy for the dryness of soils and forests.

For 2016, El Niño-driven conditions are far drier than 2005 and 2010 – the last years when the region experienced drought. The team has also developed a web tool to track the evolution of the Amazon fire season in near-real time. Estimated fire emissions from each forecast region are updated daily, based on the relationship between active detections – made by the Moderate resolution Imaging Spectroradiometer instrument on NASA’s Terra satellite – and fire emissions data from the Global Fire Emissions Database in previous years. So far, however, the region has seen more fires to date than those years, another indicator that aligns with the fire severity forecast.

Fires in the Amazon have local, regional, and long-distance impacts. Agricultural fires that escape their intended boundaries can damage neighboring croplands and Amazon forests. Even slow-moving forest fires cause severe degradation, as the rainforest trees are not adapted to burns. Together, intentional fires for agricultural management, deforestation, and wildfires generate massive smoke plumes that degrade regional air quality, exacerbating problems with asthma and respiratory illness. Smoke eventually flows south and east over major urban centers in southern Brazil, including São Paulo and Rio de Janeiro, contributing to air quality concerns.

“When trees have less moisture to draw upon at the beginning of the dry season, they become more vulnerable to fire, and evaporate less water into the atmosphere,” said Randerson. “This puts millions of trees under stress and lowers humidity across the region, allowing fires to grow bigger than they normally would.”

While scientists have been working with South American officials to broadcast the results of the forecasts and increase awareness of fire risk, they also said that the work could lead to better wildfire forecasts in other regions of the world. The team recently identified nine regions outside the Amazon where fire season risk can also be forecast three to six months ahead of peak activity. It may be possible to build operational seasonal fire forecasts for much of Central America and for many countries in Southeast Asia, Randerson said.