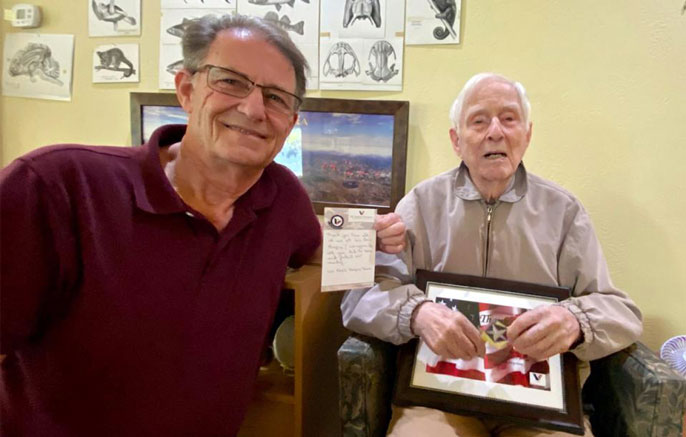 Milton Hildebrand with his son, Ross, after the We Honor Veterans ceremony Oct. 25.

A single yellow ribbon serves as a symbol this year of the dozens of others that would normally decorate the Quad for Veterans Day (Nov. 11).

Omega Lee, coordinator of the Veterans Success Center, and Michael Smith, certifying official who assists students with their veterans benefits, made sure amid the pandemic that the ribbon tradition continued. You can see it in this video in which Lee explains the yellow ribbon tradition and how it came to UC Davis, and thanks veterans for their service.

In the spring of 1945, after months of rooting out Nazis from high ridges in the Italian Alps, 2nd Lt. Milton Hildebrand — executive officer (XO) of his company in the 10th Mountain Division — crossed the fabled Po River.

As the Germans retreated, news of the Americans’ arrival spread like wildfire across the villages of the Po Valley, and Italians thronged the roadway — waving; singing; throwing flowers; passing out wine, cookies and cheese; stretching out their hands to touch the passing soldiers and shouting: “Viva, viva gli Americani!”

And while the exploits of the men and women of the “Greatest Generation” were duly celebrated in the aftermath of World War II, many of their stories have since been forgotten — and many more never told. Such is the case of the 102-year-old Hildebrand — UC Davis professor emeritus of zoology — now receiving care from UC Davis Hospice.

Through its We Honor Veterans program, hospice staff and volunteers hold personalized pinning ceremonies — often the last opportunity for veterans to receive thanks and gratitude, and to share their remarkable life experiences. On Oct. 25, hospice volunteer Randy Kanouse hosted a virtual ceremony for Hildebrand, with 40 family members and loved ones attending via Zoom.

“We use this term ‘hero’ often to describe the lives of many men and women who have done good in their lives,” said Kanouse, who helped establish the We Honor Veterans program in 2012. “But a few people — very few people — truly ‘touch the sky’ with their bravery, their determination, their sacrifices, their compassion for others and their incredible fortitude — these are the traits that come to mind when describing Milton Hildebrand.”

During a We Honor Veterans ceremony, the honoree receives a certificate of appreciation, a service pin and a U.S. flag pin. The presenter also tells the story of the veteran’s life and service, based on in-depth interviews with the veteran. For many families, the ceremonies are the first time they are hearing of their veterans' service.

Hildebrand’s son, Ross, said he was deeply appreciative of this chance to honor his father. “The entire program was very important to [my father], as well as the immediate family, and the many cousins, nieces and nephews and close friends on the call,” he said. “I believe there were a fair number of these folks who really had only a very superficial idea of the depth of Milton’s duty and service.”

In Davis and within the UC Davis academic community, Hildebrand is best known as a long-tenured professor, renowned for his work on vertebrate anatomy and morphology, embryology and human sexuality. But Hildebrand’s achievements during the war — in the years between his undergraduate education at UC Berkeley and his graduate studies there — have been largely unsung, despite his Bronze Star for leadership and bravery.

From outdoorsman to leader of men

From childhood, Hildebrand loved hiking, nature and the outdoors; later he was captain of UC Berkeley’s ski team and led burro trip outings with the Sierra Club. His skiing and mountaineering experience in snow and at altitude would become invaluable as the U.S. entered World War II, shortly after Hildebrand received his bachelor’s degree.

A paperwork mishap sent Hildebrand to camp in Tennessee as a private, but the Army brass soon realized he was a college graduate with exceptional skills — and redirected him to officer training school at Fort Benning in Georgia. He was commissioned as a second lieutenant in 1943 and began training an alpine fighting force at Camp Hale in the Rocky Mountains, where the newly formed 10th Mountain Division was preparing for an attack on Germany’s rugged southern border.

Given his unique abilities as an outdoorsman and instructor, Hildebrand proved to be a natural in his role, teaching the men skiing, rock climbing, high-altitude bivouacking, and trekking across treacherous terrain with their cumbersome weapons and packs. Initially appointed a platoon leader, he was later appointed XO of the entire battalion headquarters company.

Then, when the Army formed a ski school in the Colorado Rockies — the largest ski school in American history — Hildebrand was made an instructor, supervisor and safety advisor. Hildebrand put his wilderness experience and intuition to good use; in one instance, he warned his superiors that a frozen lake’s surface was unsafe for the soldiers, and when a howitzer blast cracked the seemingly sturdy ice, it was clear his judgment had saved the lives of countless men.

Combat in the Alps

Hildebrand’s counsel would save the troops on several more occasions after the 10th Mountain Division entered the Italian combat theater in January 1945. Positioned below the highest peaks of the Alps, the 10th Division was charged with dislodging the Germans from the mountains — arguably the toughest assignment in the entire European theater. Three previous attempts had ended in failure.

As battalion packmaster, Hildebrand supervised the use of 40 mules to deliver ammunition and supplies to troops unreachable by motor vehicles. And although he was formally the No. 2 officer in his company, the company commander was aloof and avoided engaging with the enlisted men. In contrast, Hildebrand enjoyed talking with his men, won their trust and respect, and assumed the role of de facto commander throughout the heaviest fighting.

By the end of February, the 10th Division had seized the highest ground in the mountains, and in April the troops were the first unit of the 5th Army over the Alps, spearheading the last major Allied offensive in Italy and thrusting into the Po River Valley.

During five months of intense alpine combat, the 10th Mountain Division destroyed a Nazi force 10 times greater in number, inflicting such damage that the German command was forced to redeploy their troops from other fronts. The end result was one of the Allies’ greatest triumphs in the entire European campaign — and one that hastened the fall of Nazi Germany.

At 6:50 p.m. on May 2, 1945, the crackling radio news and pealing church bells announced that the German army in Italy had surrendered. War-weary and covered in dirt and grime, Hildebrand emerged from the cave where he had been sheltering from enemy fire. He sat on a rock and was overcome by a torrent of emotion.

Perhaps he remembered the sergeant who was killed as he slept by an artillery shell the previous evening, before he could finish the letter he had been writing to his sweetheart. Or perhaps he thought of the American soldier who, pinned down in his foxhole, observed the nodding petals of the springtime bloom and wrote: “God puts flowers among us to shame us for what we are doing.” Or maybe Hildebrand thought of the fallen German soldier he had seen, the man’s fingers reaching — even in death — toward a photo of a woman and two little children.

But surely Hildebrand thought of all the men in his unit — half of whom were killed or injured in the fighting, and half of whom were, at that moment, jubilantly cheering the end of the conflict.

“Milton did so much to protect his men, to help them be stronger and better warriors, to teach them how to protect themselves, and to help them find courage and determination within themselves; and Milton’s bravery and intelligence saved so many lives,” Kanouse said near the end of his presentation. “Milton Hildebrand is a bona fide ‘Great American Hero.’”

To this, Hildebrand — who was visibly moved by the pinning ceremony and the presence of so many loved ones — later joked to a UC Davis Hospice staff member, with his trademark humility and modesty, “Don’t you think they laid it on a bit thick about me?”