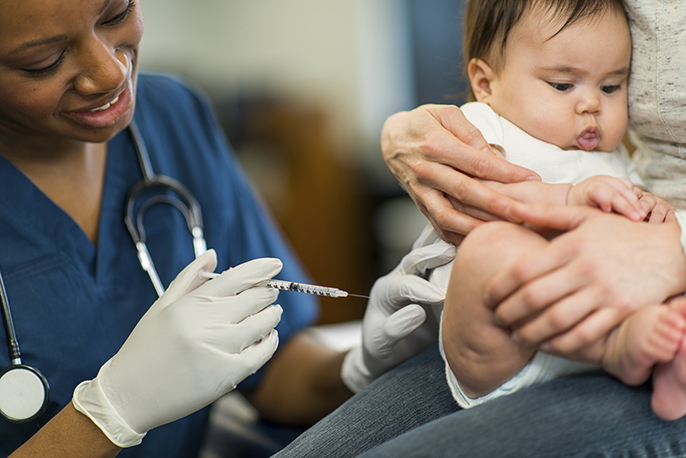 Vaccine skeptics can be convinced with the right argument, researchers say.

Many people who are skeptical about vaccinating their children can be convinced to do so, but only if the argument is presented in a certain way, a team of psychologists from UCLA and the University of Illinois at Urbana–Champaign reported today. The research appears in the online early edition of the journal Proceedings of the National Academy of Sciences.

The finding is especially important because the number of measles cases in the U.S. tripled from 2013 to 2014. The disease’s re-emergence has been linked to a trend of parents refusing to vaccinate their children.

What doesn’t change their minds? Telling parents their fear of vaccinations is uninformed and erroneous.

What does? Reminding parents that measles is a terrible disease and that they can protect their children by vaccinating them.

One group read material from the Centers for Disease Control and Prevention saying that all children should be vaccinated for measles, mumps and rubella, and explaining that the vaccine for those diseases is safe and effective. The material also said that while some parents worry the vaccine causes autism, many scientific studies have shown that no such link exists.

This approach did not change attitudes at all, the psychologists report.

The outcome was the same for the control group, whose members read an unrelated statement about feeding birds. As expected, these subjects also did not show a change in their attitudes about vaccines.

The final group read materials that described the dangers of measles, mumps and rubella, and explained how a vaccine can prevent these diseases. The materials included photographs of children with these diseases.

The group also read a paragraph by a mother named Megan Campbell, whose 10-month-old son suffered a life-threatening bout of measles.

“We spent 3 days in the hospital fearing we might lose our baby boy,” Campbell wrote. “He couldn't drink or eat, so he was on an IV, and for a while he seemed to be wasting away.”

Among group members who were skeptical about or very opposed to vaccines, this last approach substantially increased support for vaccination.

“It’s more effective to accentuate the positive reasons to vaccinate and take a nonconfrontational approach — ‘Here are reasons to get vaccinated’ — than directly trying to counter the negative arguments against vaccines,” said Keith Holyoak, UCLA Distinguished Professor of Psychology and a senior author of the study. “There was a reason we all got vaccinated: Measles makes you very sick. That gets forgotten in the polarizing debate on whether the vaccine has side effects.”

Supporters and opponents of vaccines can find common ground, the researchers said.

“People who are skeptical about vaccines are concerned about the safety of their children,” said Derek Powell, a UCLA graduate student in psychology and co-lead author of the study. “They want their kids to be healthy. That’s also what doctors want. Instead of fighting their misconception, remind them why the vaccine is the best way to keep their kids safe.”

People tend to become more entrenched when you challenge their beliefs, Powell said.

The study has broader implications for persuading skeptics on a wide range of issues. Fighting a misconception head-on is not an effective way to change someone’s mind, said Holyoak, who conducts research on learning, reasoning, knowledge and creativity.

“Try not to be directly confrontational,” Holyoak said. “Try to find common ground, where possible, and build on that.”

While some people hold very extreme anti-vaccination beliefs, many more have heard that vaccines are controversial and could be persuaded either way, Holyoak said. “They’re persuadable by the positive argument, but not by the head-on attack,” he said.

The researchers found no difference between parents and non-parents in the study. “They were the same at pre-test and were affected in exactly the same way,” Powell said.

The researchers said there may be even more effective ways to increase support for vaccination, such as by showing a video with families and doctors taking the positive approach.

“Our observed effect is probably the low end of what can be achieved,” Powell said. “Other approaches may be considerably more persuasive.”

The study’s co-authors are Zachary Horne, a graduate student of psychology, and John Hummel, a professor of psychology and philosophy, both at the University of Illinois at Urbana-Champaign.