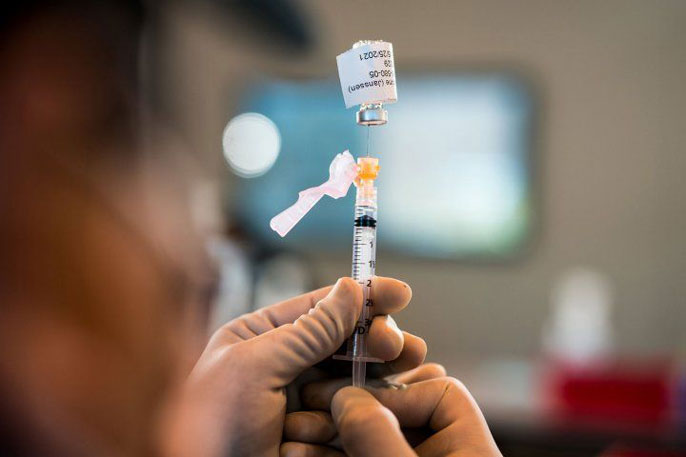 With the FDA’s emergency use authorization of the Johnson & Johnson vaccine on Feb. 27, the U.S. now has three highly effective vaccines against COVID-19.

All three vaccines — Johnson & Johnson, Pfizer and Moderna — completely prevented hospitalizations and deaths in clinical trials, which is why public health experts are recommending that people get the first vaccine that is available to them. But the vaccines differ in a number of details of how they work and how they were studied, leading to questions and some confusion.

We asked UC San Francisco infectious disease expert Monica Gandhi, M.D., MPH, to unpack some of the big questions around vaccine science, such as how the Johnson & Johnson vaccine differs, how well it works against the new variants, and whether you should be worried about transmitting the virus after vaccination.

How does the Johnson & Johnson (J&J) vaccine work? How is the biological mechanism different from that of the mRNA vaccines?

All three vaccines work by prompting your own cells to produce the spike protein — the protrusions on the coronavirus that allow it attack human cells — so your immune system learns to recognize and respond quickly to a real infection.

“Inside the adenovirus is the DNA that your body will use to make into RNA and then into the spike protein of the coronavirus,” said Gandhi. She noted that the DNA and RNA then quickly degrade in the human body and do not have the ability to affect our chromosomes.

Once your cells make the spike protein, all three vaccines work similarly. “The spike protein doesn’t look like anything in our human body,” said Gandhi. “So, you raise an immune response with T cells and antibodies to that spike protein, and that allows you to fight the virus if you ever see it in the future.”

This type of adenovirus technology has been used in an Ebola vaccine but is still relatively new. “It’s more familiar than mRNA technology, but I wouldn’t say it is the most familiar technology either,” said Gandhi.

Why is the J&J vaccine only one dose? Is it possible that it could eventually become two doses or that the mRNA vaccines could become one dose?

The J&J vaccine went into Phase III trials as a one-dose vaccine because earlier phase trials had shown strong immune responses after just one dose, said Gandhi. “After one dose, across all populations, even in older people, the antibody response and T-cell response were excellent and increased over time.”

J&J is currently conducting a trial to give people two doses, which may improve efficacy against mild and moderate disease, said Gandhi.

Gandhi also noted that the J&J vaccine continues to increase in efficacy after two weeks, the current CDC-recommended waiting period after vaccination. Immunogenicity data from the Phase I/II trials suggest the immune response may continue to improve even after 28 days. “I do think it’s going to have even more efficacy after four weeks,” said Gandhi. “I call it the gift that keeps on giving.”

For the mRNA vaccines, the immunogenicity data after one dose did not look as powerful, so the Phase III trials were conducted with two doses. Although some real-world data suggests that one dose may also offer good protection, Gandhi said there is not enough information to recommend getting only one dose of the mRNA vaccines.

Some people are concerned that the overall efficacy of the J&J vaccine — 66 percent globally, 72 percent in the U.S. — is lower than the 94-95 percent reported for the mRNA vaccines. Can you put this difference in context?

“The way I think about these vaccine trials is to look at the worst outcomes first — hospitalizations and deaths from COVID-19 — because that’s what got us into trouble to begin with,” said Gandhi.

For severe disease, which includes people who were sick enough with COVID-19 to require medical intervention but recovered without hospitalization, the efficacy was about 85 percent across the board in Brazil, South Africa and the U.S.

Including mild and moderate disease, the overall efficacy was 66 percent, but varied across the regions: 72 percent in the U.S., 64 percent in South Africa, and 61 percent in Brazil. “Mild and moderate outcomes” could include a range of illness, said Gandhi, and we won’t know the details until the full trial results are published, but we do know that everyone recovered without medical intervention.

“Admittedly, against mild to moderate disease, it didn’t work as well, and I understand people’s concerns,” said Gandhi.

Yet she said that on a population level, the availability of a one-dose vaccine can really speed up vaccinations and help bring total cases down. She pointed to the United Kingdom, which has rolled-out a similar one-dose, adenovirus vaccine, made by AstraZeneca, that protects against severe disease, hospitalizations and deaths very well but is less effective against mild and moderate disease.

“Their hospitalizations and cases are plummeting faster just because they have more vaccine supply. Their outcomes have been phenomenal,” said Gandhi. “So when I look at that, I think, ‘Oh, I can quibble all I want about the clinical trial, but the real world is the real world.’”

What do we know about each vaccine’s ability to protect against the variants?

We know more about how the J&J vaccine protects against the coronavirus variants because the trials were conducted in South Africa and Brazil when the new variants had become prevalent. In South Africa, some 95 percent of circulating virus was the B.1.351 variant and in Brazil, 69 percent of the circulating virus was a P1/P2 variant at the time of the trial. Although the J&J vaccine appeared to be less effective against mild and moderate disease in these regions, it remained strongly protective against severe disease, hospitalizations and deaths.

“We cannot say definitively that the difference in efficacy in these regions is due to more variants, but it’s an assumption,” said Gandhi.

In the U.S., where the prevalence of variants was low, the overall efficacy of 72 percent likely was not affected by the variants, said Gandhi.

In contrast, the mRNA vaccine trials were not conducted in the presence of high levels of the variants, so less is known about how well they protect against the variants. Real-world data from Pfizer vaccinations suggest they are effective against the B.1.1.7 variant originally detected in the U.K.

What do we know about each vaccine’s ability to prevent asymptomatic infection?

Were there other differences between the vaccine trials?

The more diverse participants not only help to better determine vaccine efficacy but also “enhances trust among the populations that look like the populations who are enrolled,” said Gandhi.

If you’re somewhat less protected against mild and moderate COVID-19 with the J&J vaccine, does that mean you are more likely to transmit the virus? Should your behavior depend on which vaccine you get?

No vaccine can prevent all COVID-19 infections. To minimize the chances of transmitting the virus even after you’ve been fully vaccinated, Gandhi suggests avoiding contact with unvaccinated people if you experience possible COVID-19 symptoms.

The good news is that vaccination seems to reduce viral load in the small percentage of people who still become infected. Preliminary data from Israel of the Pfizer vaccine suggest that if you catch COVID-19 after vaccination, you’re likely to harbor less virus, making you less likely to transmit.

“I think it’s going to end up being quite hard to transmit virus after you’ve been vaccinated, even if you are exposed, because of the low viral load in your nose,” said Gandhi. “Which is one of the reasons the CDC has said that vaccinated people do not need to quarantine after exposure if asymptomatic. That’s really based on that data.”