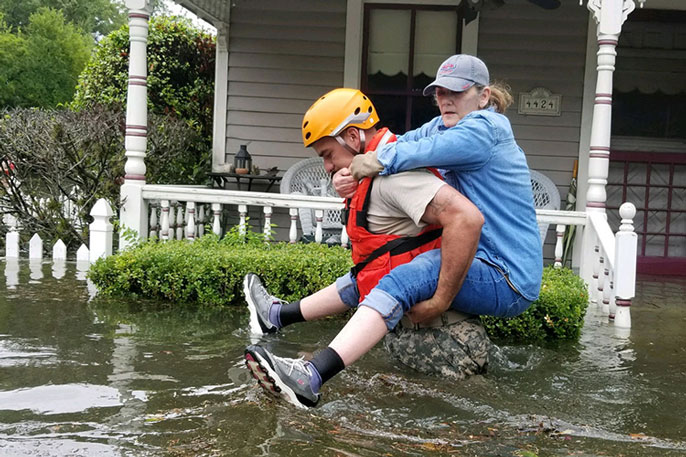 When Hurricane Harvey struck the Texas coast in late August, Americans had a choice: they could share their resources or look the other way.

Although as a society, we tend to value individualism — looking out for number one before anyone else — it doesn’t always make us happy, says Emiliana Simon-Thomas, the science director of the Greater Good Science Center at UC Berkeley. Instead, sharing what we have often brings us more joy.

“Giving from your own resources, your own reserves, is tied to activation of pleasure circuits of the brain,” says Simon-Thomas. “When you are more generous, when you tap into that and engage with it more, you experience more pleasure from it.”

People are stepping up to help flood victims in all different ways. Health professionals are offering services at no cost, chefs are cooking meals, orthodontists are offering emergency treatment, musicians are performing at evacuation shelters.

This display of generosity isn’t surprising, says Simon-Thomas, but rather, human nature at work. “We’re more like ants than like cats… right? Or mountain lions. We succeed through our cooperative endeavors. We live in really rich, dynamic, complex communities.”

A student group on campus — the Mexican Association of Students at Berkeley — has already raised nearly $5,000 in emergency relief, and they’ve launched a second fundraising campaign to help rebuild in small towns.

But what happens when people have all the resources they need at their fingertips?

“There’s definitely a tendency, when people are highly privileged… you just have a different outlook than if you really don’t ever have to seek any assistance from anyone else.”

Gaining this kind of power, she says, has potential to change a person. “Power corrupts,” says Simon-Thomas. And everyone is corruptible.

“But if you’re aware, if I get this power, I am corruptible. But what can I do to manifest an antidote to that tendency?”

It’s easy, she says, for people to try to justify their privilege somehow. To find a reason that they’re exceptional in some way by saying, “Oh, I worked harder than the other people. I deserve what I have because of something about who I am that is unique compared to other people who don’t have anything. To the extent that they can maintain a sense of common humanity, and really focus on the ways that other people’s actions and efforts and presence are essential to the privilege that they’ve got.”

If we humans follow our instincts, we’ll rush to the aid of Puerto Ricans, too, giving what we can to help our fellow humans.

Learn more about how we are hard-wired for kindness in this video featuring the work of Greater Good Science Center founding director Dacher Keltner:

Emiliana Simon-Thomas co-teaches “The Science of Happiness,” a free, eight-week online course through the Greater Good Science Center. This article is a written version of the Berkeley News podcast episode, "How generosity flows in both directions," that you can listen to here.