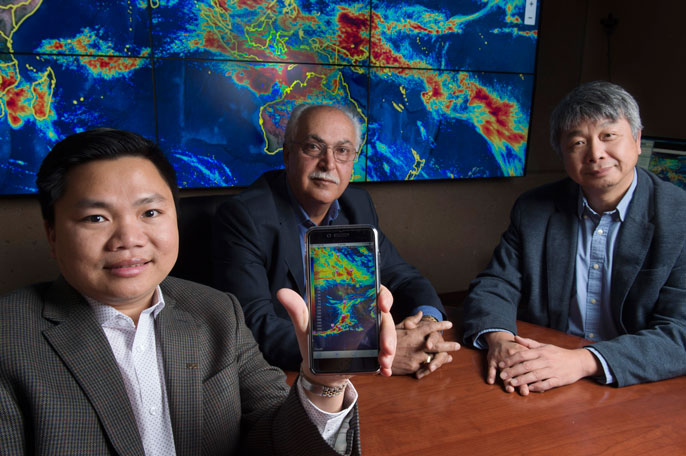 Climate researchers and weather forecasters get their rain data from a network of precipitation-sensing satellites that orbit Earth. iRain, a new mobile phone app developed by engineers at the University of California, Irvine puts the same precision rainfall information into the pockets of the public.

“The beauty of iRain is that it’s an access point for an entire system that detects, tracks, and studies precipitation on our planet,” says lead developer Phu Nguyen, assistant adjunct professor of civil & environmental engineering. “We process the data from satellites and offer it to the end user, free of charge. As far as I know, we’re the only institution offering such a device.”

Features of the mobile app include a tool that displays the top 50 current extreme weather events around the world, animations that show varying levels of rainfall intensity and movement, a function to choose different time spans, and a tool to zoom in to a local area.

Many of the functions of the app are also available through a website, which is useful for researchers who often need to generate and download reports.

UC Irvine uses data from U.S., European, and Japanese satellites in collaboration with agencies such as NASA and NOAA to produce rainfall information now being accessed by people in more than 180 countries.

“The power of iRain is that it brings state-of-the-art rainfall estimation based on actual observations to anyone, anyplace in the world at any time,” says Robert Pietrowsky, director of the U.S. Army Corps of Engineers Institute for Water Resources, who helped launch the app at the United Nations Climate Change Conference in Marrakesh, Morocco, in November.

iRain is part of UC Irvine’s PERSIANN project, the culmination of decades of research and development by scientists and engineers in Center for Hydrometeorology and Remote Sensing.

Nearly 20 years ago, Kuo-lin Hsu, professor of civil and environmental engineering, created an algorithm for the retrieval of rainfall data from satellite images. His algorithm is based on technologies that enable rainfall estimations to grow in precision and reliability over time based on the accumulation of data.

Hsu says one of the key challenges for his developers over the years has been to reduce the wait time between retrieval of data, processing, and distribution through government servers. With the launch of iRain, UC Irvine demonstrates that it’s possible to compress that down to about an hour.

“The meteorological agency in the African nation of Namibia is using our data, and we’re seeing it used in China, Thailand, and other Southeast Asian nations that have a serious stake in flood monitoring,” says Hsu. “Support from UNESCO has enabled us to dramatically expand the number of users for the data around the world. Now people don’t need resources to launch their own weather satellite, they just need an Internet connection to receive real-time data.”

“We had a vision on how we could use satellites to come up with estimates of rainfall that would have applications for flood forecasting and other purposes,” says CHRS director Soroosh Sorooshian, Distinguished Professor of civil and environmental engineering. “At a meeting in Italy years ago, I presented the concept of introducing machine learning tools such as artificial neural networks to address the problem. There were many skeptics in that audience, but here we are today; people around the world are benefiting from our efforts.”