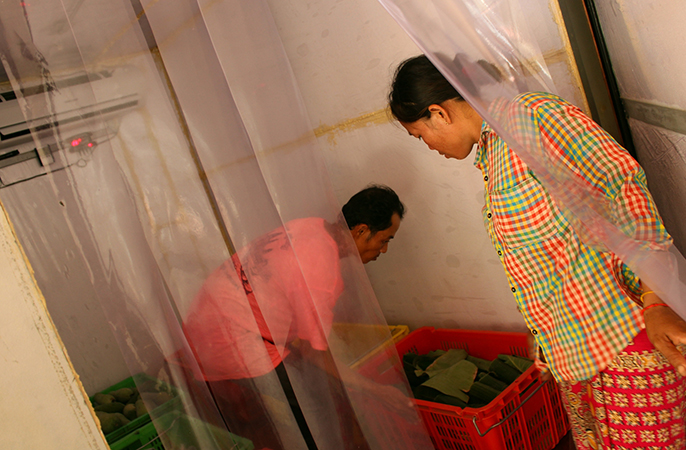 Farmers Pak Ry (left) and Brap Yart carry a bin of sponge gourd and banana leaves into a CoolBot-equipped cold room in Cambodia, to keep the produce fresh before sale.

The UC Global Food Initiative and UC Blum Centers will host a Global Food Summit on Sustainable Solutions, May 5-6 at UC Irvine. Elizabeth Mitcham, director of the Horticulture Innovation Lab and UC Cooperative Extension postharvest pomologist at UC Davis, will be speaking about technology transfer for horticulture-related technologies such as the CoolBot, seed drying beads, UC Davis-designed chimney solar dryer, pest-exclusion nets and other tools the program adapts to the needs of farmers in developing countries. She also will be on a panel with two other UC Davis-based directors of Feed the Future Innovation Labs.

In many developing countries, more than half of all fruits and vegetables are never eaten, but instead are lost, damaged or spoiled after harvest. These “postharvest” losses can mean that farmers need to sell their fresh produce as soon as it is harvested for whatever price they can get, before they lose the crops that represent investments of labor, water, and agricultural inputs. Improving how fruits and vegetables are handled after harvest can significantly prolong freshness — and cooling is key.

Cooling can be expensive — even for American farmers

As a farmer in upstate New York, Ron Khosla knew this problem too well. His vegetable crop was spoiling too quickly, but he could not afford to buy a walk-in cooler for his small farm. So he invented a solution: a small electrical device he called a CoolBot that tricks an air conditioner into getting colder without freezing over, turning a well-insulated room into a cold room at lower costs than refrigeration.

“I was hoping for a cheap, DIY solution that I could maintain. But mostly I just needed to keep my leafy greens and strawberries cold,” Khosla said.

One of his farming customers suggested he sell this device to other farmers, so he started a small business called Store It Cold LLC.

Khosla's CoolBot invention caught the eye of postharvest researchers, including Reid, who saw it in action on farms in California and decided to try using it in developing countries too.

In one of his first projects with the Horticulture Innovation Lab (a program led by UC Davis with funding from the U.S. Agency for International Development), Reid partnered with agricultural scientists from Uganda, Honduras and India to test the CoolBot in their climates. The four scientists also tested different local materials as insulation for each of the cold rooms.

Jane Ambuko of the University of Nairobi is another Horticulture Innovation Lab partner who has worked with the CoolBot. She received a grant to pilot this technology with mango farmers for a program called the Kenya Feed the Future Innovation Engine. Her project was featured on an NTV Food Friday news segment about the CoolBot earlier this month.

“I see the CoolBot making a whole lot of difference,” Ambuko said during a TEDxNairobi speech. “But for it to make that desired difference we have to make it cost-effective and affordable for the smallholder farmers.”

Adapting, troubleshooting and scaling up

In many places, the most expensive part of a CoolBot-equipped cold room is the structure for the insulated room, but both Reid and Khosla expect foam building materials to become more widely available and affordable.

Reid has contacted Khosla, the farmer-inventor, to troubleshoot challenges and discuss results from new locations. In places without reliable electricity, Reid has tested options for solar power.

In the meantime, Khosla's small business has been growing — selling to not only farmers, but also florists, micro-brewers, and other artisanal food businesses. Now with six employees, the company has sold more than 27,500 CoolBots in 51 countries.

“I'm thrilled and so grateful to be a part of helping lots of people. Working with USAID has gotten us known in other countries, and I'm looking forward to the day when we have enough in-roads in India and Africa where we can work directly with farmers there,” Khosla said. “People didn't believe the CoolBots worked at first. But now we get the most amazing letters from people whose businesses have doubled or quadrupled. Good postharvest care makes such a difference. Once they try it, then they see.”

A previous version of this article appeared in the newsletter for Feed the Future, the U.S. government's global hunger and food security initiative, and also in the Horticulture Innovation Lab blog.