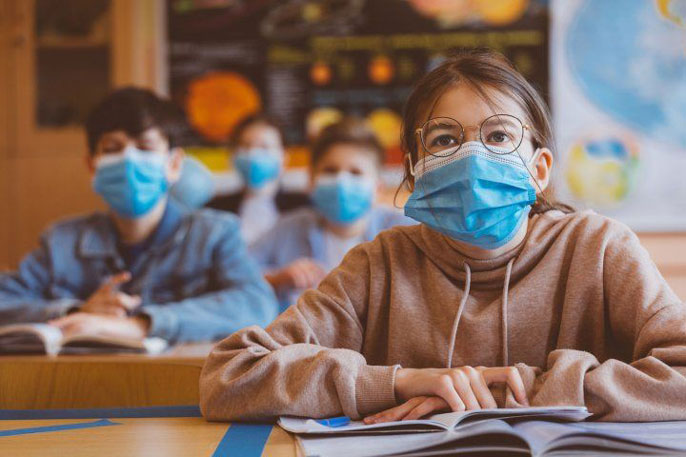 As the new school year begins, school districts and families across the country are grappling with the difficult questions of when and how to return to in-person learning.

While younger children are less likely to get sick from or transmit COVID-19, older teenagers may be as susceptible as adults.

But experts also say that schools should be thought of as an essential service, and caution that keeping them closed will harm children developmentally and educationally, deprive them of social services, and may prevent many parents from returning to work.

Experts agree that school reopenings should depend largely on community transmission rates, which are still too high in many counties across the South and West. When schools do reopen, a long list of recommended safety precautions, from mask-wearing to well-ventilated classrooms, may present a challenge for many schools – especially those that serve lower-income students already disproportionately impacted by the pandemic.

We talked to UC San Francisco pediatricians, Elizabeth Rogers, M.D., Jenna Holmen, M.D., and Lee Atkinson-McEvoy, M.D., about what we know about COVID-19 in children, the safety precautions schools need to take, and their perspective on how to balance the risks and benefits of re-opening schools.

What are the key considerations in deciding to reopen schools?

The first consideration should be the prevalence of COVID-19 in the local community, experts said. That’s because what happens inside schools will largely reflect what’s happening outside schools.

“I think that is one of the bigger challenges to schools in the U.S. compared to places like Europe, because community transmission varies so much across the U.S., whereas most of Europe has leveled out,” said Holmen.

The best data we have on successful school reopenings are from countries, like Denmark, Norway and Australia, that have maintained very low transmission rates, said Holmen. “Not exactly comparable since we’re still having a large number of cases.”

There is no national criteria for the level of community transmission deemed safe for schools to reopen. In California, the state has specified that counties must be off the County Monitoring List for at least 14 days before opening for in-person instruction. Among the criteria to get off the list are fewer than 100 cases per 100,000 people and a test positivity rate below 8 percent.

Besides community transmission, school districts also need to consider whether they have the space to allow physical distancing and the resources to screen teachers and students daily for symptoms, allow good hand hygiene, keep classrooms clean, and rapidly test and contact trace when cases do occur, said Atkinson-McEvoy.

“But the critical thing is the low prevalence in the community. If there’s more disease, then it’s harder to open schools without having many more resources,” she said.

In general, kids seem to be at lower risk for COVID-19. But that can vary between preschoolers and high schoolers. What do we know about COVID-19 and kids of different ages?

Early studies of COVID-19 in children looked at the population from birth to age 17 as a whole, but it has become clear that the impact of the disease varies within that age range. “What we weren’t sure of, because we didn’t have the data, was where the inflection points are — where does the risk really change?” said Rogers.

It’s now believed that children under 10 are less susceptible to COVID-19 because the cells in their respiratory tract have fewer entry points for the virus. These entry points, known as ACE2 receptors, increase with age.

“We think that teenagers act more like adults in terms of ACE2 receptors, which suggests that high schools needs to be treated very differently than elementary schools,” said Rogers.

The gray zone is upper elementary school grades and middle schools, when children are 10 to 14 years old, said Rogers, because we still lack precise data on how risk increases in these years. “Based on some of the epidemiological studies, we’ve now decided to put middle school with high school because we think that they are higher risk.”

Though younger elementary school-aged children may be the least susceptible to COVID-19, another consideration is their behavior, said Rogers.

“You have to take what we understand about the natural course of the disease with also the ability to comply with risk mitigation elements. Is the first-grader going to keep a mask on? Can a first-grader respect physical distancing?” Younger children are also more likely to be yelling and singing, for example.

“We think the lower grades of elementary school are fairly safe if we can get them to mask and keep them fairly physically distanced,” said Rogers. “And those kids we know benefit from in-person education the most, so we feel like that’s a good group to start with.”

Can children transmit COVID-19 to each other or to adults?

Children also appear less likely to transmit the coronavirus, though the reasons are still unclear, and most studies do not separate younger and older children. One small study found that mild to moderately ill children (under age 18) had at least as much of the coronavirus in their noses and throats as adults, but experts said viral load does not necessarily reflect the ability to transmit.

“But the critical thing is the low prevalence in the community. If there’s more disease, then it’s harder to open schools without having many more resources.”
–Lee Atkinson-McEvoy, M.D.

More applicable to school reopenings are the epidemiological studies that have shown that children are less likely than adults to spread the virus. In a Swiss study of households with infections, children (under age 16) were the first to develop symptoms in only 8 percent of households. A study of schools in New South Wales, Australia, found that the chances of transmission, known as secondary attack rate, from child to child (under age 19) was only 0.3 percent (that is, only 2 out of 649 contacts with an infected child resulted in transmission), compared to a staff-to-staff secondary attack rate of 4.4 percent.

Perhaps, experts have suggested, children are less likely to spread the coronavirus because they have smaller lung volumes and therefore expel fewer respiratory droplets. They also tend to get milder illness and may not cough as much. Children are also shorter, meaning their respiratory droplets would travel less far before falling to the ground.

We usually think of children as spreaders of disease. Why wouldn’t this apply to COVID-19?

COVID-19 is an outlier as a respiratory infection in that children appear less likely to get it and to spread it, but Atkinson-McEvoy said it’s understandable why some teachers still feel apprehensive.

“I’d say for teachers, they have the experience that kids bring illness to school,” she said. “It’s certainly true with influenza, which they see every winter that parents send their kids to school when they’re sick, even though there’s already a rule in place that a sick child should stay home.”

Teachers also know that kids are in the process of developing control over their impulses and do not always behave in a way that’s safe, said Atkinson-McEvoy.

“Teachers are used to seeing kids touch their face, wipe their noses, touch something else, not cleaning their hands. And so they’re very worried that kids are going to introduce infection.”

Two examples from summer camps illustrate the risks of children transmitting the disease and ways to mitigate that risk. In a Georgia sleepaway camp that opened during a time of high community transmission, with no masking, large cohorts, unventilated cabins, and singing, 76 percent of campers and staff tested were positive for COVID-19. In contrast, in a study not yet published, two indoor day camps in San Francisco that practiced masking, physical distancing, hand hygiene, and had stable cohorts, good ventilation, and self-administered testing, resulted in no infections.

What can schools do to reduce the risk of COVID-19?

Even if community transmission is low enough for schools to reopen, the classroom will look very different than a typical school year.

First, schools will need to find an appropriate way to screen everyone coming to campus — students, teachers and staff — and ask those with symptoms to stay home, said Atkinson-McEvoy. Everyone will need to keep masks on all day and remember to wash their hands.

“That involves schools having facilities that work and considering how far might somebody travel without being able to get to a hand-washing or hand-sanitizing station.”

Students may be grouped into smaller, stable cohorts to allow physical distancing and reduce contacts — especially challenging in middle and high school where kids typically rotate classes. Sports and music classes likely will be off limits.

Schools will need to be sufficiently staffed to clean classrooms between groups of students. “Teachers should see their classrooms as their home, yet they don’t have the ability to wipe down all those surfaces in between students — besides it not being their job,” said Atkinson-McEvoy.

Testing in both the community and in schools is important, said Atkinson-McEvoy, as well as the ability to contact trace quickly so that “ideally, within a few hours of identifying a positive case, you’d be able to know everybody who that person was in contact with and to get those people assessed.”

Above all, schools will have to remain flexible.

“I don’t know that anybody thinks that once school’s open, that they’re going to stay open, or even if they stay open, that all classes or cohorts of kids will be there,” said Atkinson-McEvoy.

Imagine, she said, a fourth-grade class with 20 students who are divided into two cohorts of 10. If a student in one cohort tests positive, that cohort will need to be quarantined. The teacher will have to adjust to teach half the class remotely and half in person. But what if the teacher also needs to be quarantined? Who’s then teaching in classroom?

“There are a lot of moving parts that make it really complicated and hard to figure out,” she said. “I think the most realistic approach is that schools will be facing a lot of starts and stops. And this focus on opening is just one small piece of it.”

Despite the complexities of reopening schools, experts agreed that remote learning has its drawbacks, particularly for more disadvantaged families. Children may not have the quiet space or fast internet required for online learning. Those who have learning differences may find it especially hard to adapt. With many schools suddenly switching to remote learning in March, there has not been enough time to translate in-person curriculums into remote ones that are equally robust, said Atkinson-McEvoy.

And many families depend on schools for more than education.

“For some kids, breakfast and lunch at school might be the only two meals that they can count on,” said Atkinson-McEvoy. Many parents do not have access to childcare without school and essential workers may have to choose between going to work or being home with a young child doing distance learning. “I think that’s an impossible decision for them to make,” said Atkinson-McEvoy.

Having teachers and other adults in school who can monitor a child’s well-being can also bring attention to child abuse or neglect in the home, said Holmen, a problem that has gotten worse since case workers have not been making home visits during the pandemic.

For all these reasons, “schools should be considered an essential service,” said Holmen. “So our goal needs to be to figure out how to reopen safely.”

Rogers, who is leading the UCSF Collaborative to Advise on Re-opening Education Safely (CARES) group, said, “We think we have the innate ability to reopen education safely — if we as a community and as a society prioritize it.”

“But we’ve also very much adopted from the beginning a stance of extraordinary humility – that what we know today may look very different tomorrow.”