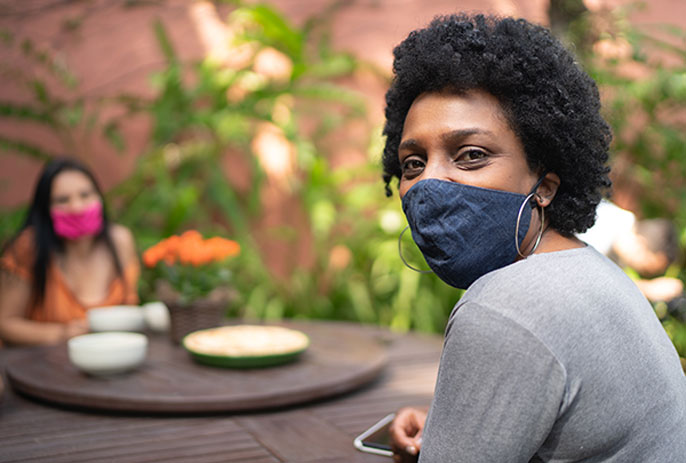 On a Thursday morning in mid-February, writer Donna Ashworth woke up in lockdown in Scotland, and something felt different. “You could feel the collective quiet,” she says.

At night, her neighborhood no longer came to life with raucous cheers and clapping for health care workers. Her phone was no longer buzzing with messages from group chats, friends checking in, or invitations to virtual game nights. When someone did reach out, Ashworth felt guilty about how long it took her to reply.

She sat down to write a short poem about her feeling, and then posted it to her Facebook page, Ladies Pass It On. The poem went viral, garnering more than 7,500 comments as of this writing. People across the world reached out to thank her for putting into words what they were feeling:

We are spent.
We have nothing left to say.
We are tired of saying “I miss you” and “I cant wait for this to end.”
So we mostly say nothing, put our heads down and get through each day.

If the response to Ashworth’s poem is any indication, something happened early in the year — after the distraction of the holidays and before vaccinations really ramped up — where many of us withdrew into ourselves, cutting down on social interaction.

According to University of Essex social psychologist Gillian Sandstrom, the lockdown got harder as it went along, even for people who coped well last year. Over in the U.S., psychotherapist Lindsey Antin has seen her clients’ energy and social activity go up and down in waves, depending on how hopeful they feel at any given moment.

Why would we withdraw, even though we desperately need each other?

It’s not just an academic question for psychologists or historians to answer. Vaccines are rolling out fast, and more of us will soon be able to meet up with friends and family, including those whose messages we sometimes ignored.

Perhaps, if we understand the roots of our social behavior during the pandemic, we’ll be more likely to forgive ourselves and the people around us for withdrawing. This could help us come back together in a post-COVID world.

It’s not news that the pandemic has brought us extra stress, loneliness, and depression — but what perhaps went unappreciated is how much these mental states led us to avoid interacting with others.

Loneliness, rather than prompting us to connect, actually makes us withdraw, according to research. We start to feel unworthy of our relationships, worried that people are judging us or don’t enjoy being around us. Depression saps our energy and motivation, and affects our sense of self-esteem. It makes it hard to do the things that would help alleviate the depression, including engaging with other people.

According to Antin, people with depression often feel like they don’t have much to bring to the table in conversations with others. Particularly if they’ve been isolated and inactive, they don’t always know what to talk about that would be interesting to another person.

The same is probably true for many of us during the pandemic, stuck at home and unable to eat out at restaurants, enjoy many of our hobbies, or take vacations that would make for good stories.

Sandstrom agrees, adding that many of us are probably sick of talking about COVID. Her own research focuses on people’s expectations and experiences around social interactions, and it suggests that we underestimate how enjoyable interacting with other people will be. At the prospect of talking to a stranger, we worry about whether they will like us and enjoy talking to us, and about our ability to sustain a conversation. And people probably worry about many of the same things around their friends, she says.

“We might think, ‘Oh, I could have told that story better than I did,’ or ‘Oh, why did I say that? What if they don’t understand me? What if they’re offended?,’” she says. “We have this voice in our head judging ourselves the whole time, and it’s not very positive.”

In addition to feeling pressure to be interesting, some also feel pressure to be positive. Early in the pandemic, many people rallied together with optimism — the collective sense of “we can do this.” We reassured kids and elderly parents that things would be fine. But after a year, keeping up that positive spirit isn’t so easy anymore.

It’s exhausting to constantly act cheerful and hopeful when you don’t feel that way. But if all we have to share are complaints, pessimism, and sadness, we may worry about being a burden to others. This was certainly the case for Ashworth, who has always played the role of uplifting and encouraging the people around her.

“I think nobody had anything positive to add, so everybody just kind of shut up for a while,” she says.

By not sharing those heavy thoughts with others, she thinks, we also managed to avoid really examining them ourselves. The losses and uncertainty of the pandemic felt so monumental, from worries about whether our kids will be damaged to the inequities in who gets sick and who gets treatment; avoiding people meant we wouldn’t be forced to face them.

“Nobody really wants to dig too deep anymore because the answers are so disappointing,” says Ashworth.

Even for those of us who aren’t struggling as much, we are simply lacking in time and energy. We are overwhelmed.

It’s natural that our social worlds would contract right now, focusing on the people who live in our household, and maybe our closest friends and family. Last year, many adults were suddenly tasked with homeschooling their kids, supporting partners who lost their jobs, or constantly cajoling older relatives to stay home and take the pandemic seriously.

Indeed, around the world, in just one year, millions of people lost their lives to the pandemic and millions more suffered severe cases of COVID-19, which affected an uncountable number of other people in ways that were incredibly stressful and even traumatic. We all knew that death and suffering lay outside the walls of our homes. Every apartment was like a tiny lifeboat.

“In some ways, our close relationships are the most positive but also the most taxing, because they’re the ones we have to be there for and deal with all their crap,” says Sandstrom. “It could be that with close relationships, we just feel like we really have to support right now and we don’t have any energy left over for other people.”

With so many demands on our attention, when we do have a moment to ourselves, sometimes all we crave is a bit of peace and quiet. But we can’t always get it, especially when we’re stuck sharing space with other people in lockdown.

We need solitude, too

According to research, “aloneliness” — the opposite of loneliness, the lack of solitude — is a real problem. People who are lacking in solitude can “end up feeling irritable, overwhelmed, or drained,” writes psychologist Virginia Thomas. They are more stressed and less satisfied with their lives.

In an effort to avoid this fate, some of us may be clinging to any moments of solitude we can get, rather than responding to a text or joining in a digital catchup.

Even Antin’s first-grade son was feeling it. One day recently, she went to check on him and found him alone upstairs, eating graham crackers and reading a book. So, she invited him to sit with her while she worked. “He’s like, ‘No, I need some time by myself,’” she recalls with a laugh.

When we do have enough energy to connect, the options are fraught and often unsatisfying. Spending time in person requires an elaborate risk-reward calculation based on the other person’s pandemic behaviors, and possibly an uncomfortable conversation about whether you’ll wear masks, physically distance, and meet outdoors.

Online social interaction was fun and novel for a while, as we discovered new platforms for watching movies, playing games, and even dancing together-but-apart. But now, many of us are just exhausted. According to researchers, Zoom fatigue is real, and it comes from the fact that most video calls involve unnatural levels of eye contact, the distraction of staring at our own reflection, the inability to move around, and difficulty interpreting people’s body language.

“Virtual hangouts tend to be less fulfilling than in-person ones and leave us longing for that physical connection,” writes Kelsey Borresen for the Huffington Post. And the opposite happens, too, when the hassle of getting all suited up to meet someone outdoors and then barely being able to hear them through masks and distance makes you wish you’d just had a phone call.

We’re tired of the options available to us, says Antin. No solution is perfect, so sometimes we opt for no solution at all.

More than a month after Ashworth wrote her viral poem, she is seeing a shift in people’s moods. Thanks to vaccines, many are starting to feel excited about the future, even as we worry about being disappointed again as lockdowns get extended and timelines pushed back.

When all this is over, our relationships — digital or distanced — won’t be the same right away. Even being around other breathing humans may be anxiety-provoking at first. Our social skills may still need practice, because they are skills, after all, Sandstrom says. And the effects of pandemic-related trauma or depression won’t immediately go away once we get a shot in the arm.

There are a few things we can do to ease the transition. We’d do well to remember Sandstrom’s research on how surprisingly fun it is to interact with others. Even during the pandemic, when she paired up strangers online, they ended up talking longer than expected — 40 minutes, on average, as opposed to 14 — and found the conversation more enjoyable and easier to maintain than they thought it would be. We are built for this, even when the little voice in our head says otherwise.

Our relationships will bounce back better and stronger if we don’t take the past year’s unreturned messages or declined invitations personally. It will help to be patient and understanding of the people around us who are finally emerging from their homes, perhaps more slowly than we are, perhaps with more anxiety than they had before.