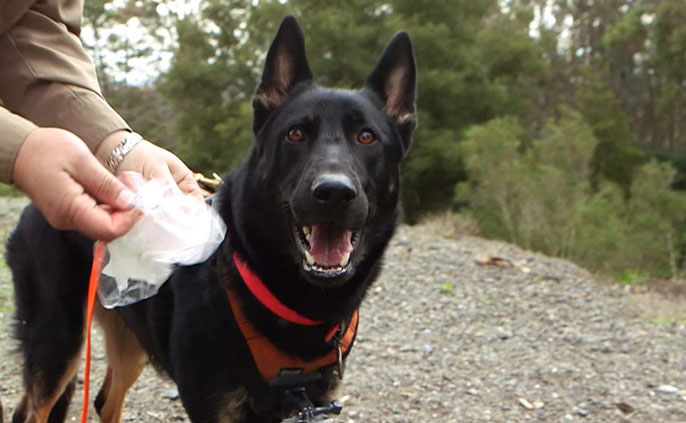 Search-and-rescue dogs are prized for their ability to sniff out a hiker buried in deep snow. But how exactly do their noses work?

UC Berkeley neuroscientist Lucia Jacobs is exploring the smell navigation mechanics of tracking dogs as well as smaller animals who use a similar olfactory GPS. Her research was featured on PBS NewsHour Aug. 16, and is highlighted in the video below.

“Dogs have evolved a range of intricate tricks to follow smells,” Jacobs says. For example, when a scent starts to break up, the dogs form a circle around the edges of an odor plume, where they find the olfactory information needed to stay on track.

To test canine olfactory tracking skills, Jacobs teamed up with rescue dog handler Shay Cook and her German shepherd Zinka and other trailing dogs, who were fitted with GoPro cameras, GPS trackers and microphones to measure their sniff rate. Jacobs plans to use similar methods to track the smell navigation skills of leopard snails, hermit crabs and death head cockroaches, who use their antenna to sniff in two directions.

Each species, Jacob says, “shows the same behaviors when responding to odor, but they’ve got completely different nervous systems. So we think there’s got to be a common algorithm that they’re all using.”

The ScienceScope series is narrated and created by Nsikan Akpan, digital producer for the PBS NewsHour. It explores the findings of Jacobs and 30 other researchers who are working on “Cracking the Olfactory Code,” a new $6.4 million project, sponsored by the National Science Foundation and President Obama’s Brain Initiative.

The first episode, “What a smell looks like,” aired in early June and covered the work of University of Colorado engineering professor John Crimaldi, an expert in fluid dynamics, who designed the odor landscape used by researchers to study animals’ smell navigation skills.

For more details about the series and the latest episode, “Inside the extraordinary nose of a search-and-rescue dog,” click here.