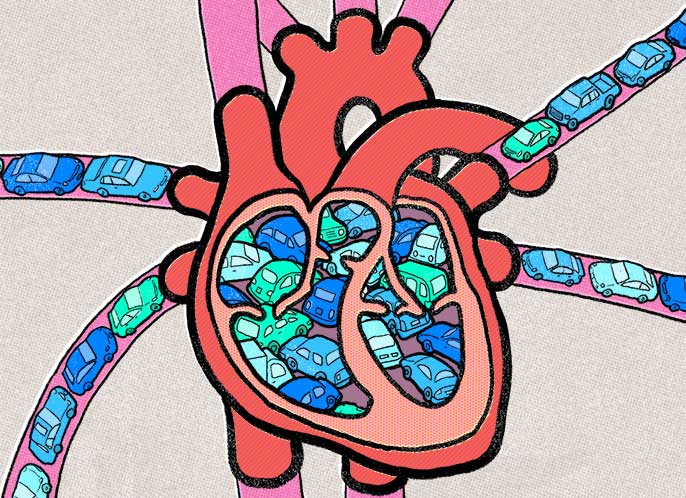 Anyone who has experienced Los Angeles gridlock likely can attest that traffic may cause one's blood pressure to rise. But UC Irvine researchers have found that, beyond the aggravation caused by fellow drivers, traffic-related air pollution presents serious heart health risks — not just for rush hour commuters, but for those who live and work nearby.

“While the impact of traffic-related pollution on people with chronic lung diseases is well known, the link to adverse heart impacts has been less described,” said Wittkopp.

Her research project, funded by the National Institute of Environmental Health Sciences, focused on residents of a Los Angeles senior housing community who had coronary artery disease.

Study participants spend the vast majority of their time at home, which meant they had prolonged exposure to traffic-related air pollution at the site. Because of their age and preexisting heart conditions, they were thought to be more vulnerable to small, day-to-day variations in air quality.

“They are really in the thick of it,” Wittkopp said. “They are the ones that are going to suffer the most, and who are the least likely to be resilient.”

Up to now, most studies on the impacts of air pollution have focused on its effects over much larger populations, with difficulty capturing accurate exposures and short-term changes. Wittkopp and her team wanted to look at how daily fluctuations in traffic and air quality would affect those residing in the immediate vicinity of congested roadways.

The research team, led by advisor Ralph Delfino, associate professor and vice chair for research and graduate studies in the Department of Epidemiology at UC Irvine’s School of Medicine, set up air quality monitors at the residences of the study participants. They looked for daily and weekly changes in traffic-related pollution such as nitrogen oxides, carbon monoxide, and particulate matter.

What they found: “Blood pressure went up with increased traffic pollutants, and EKG changes showed decreased blood flow to the heart,” Wittkopp said.

Just how susceptible a person is to these negative impacts appears to depend not just upon age and proximity to traffic, but also upon genetics, the research team found.

They uncovered what they believe is the first epidemiological evidence that a person’s mitochondrial DNA could affect their susceptibility to adverse health effects related to air pollution.

“When our cells are exposed to toxins, they respond by making more proteins that enable them to detoxify pollutants,” Wittkopp said. “We can actually monitor how the protein levels are going up and down and how the gene readouts change as people are exposed.” Looking at traffic-related pollution, they discovered that a person’s ability to produce the proteins that combat pollutants varied dramatically based on their DNA.

By identifying the genetic variables that place people at greater risk, health care providers could help account for these impacts and prescribe proactive treatments — such as antioxidants that reduce inflammation — that would make people less vulnerable.

But Wittkopp also stresses such treatment would simply be a Band-Aid on the greater problem.

“Understanding the health problems that traffic-related pollution causes helps us understand why we need to change things and improve our infrastructure to reduce exposure,” said Wittkopp, who believes this research can provide policy-makers and the public with a fuller picture of the impact of pollution.

“This kind of information can help us quantify the cost of traffic-related air pollution in terms of health care costs, lives lost and quality of life diminished.”

While genetic factors may make some more vulnerable than others, Wittkopp points out, “There’s no one who’s not susceptible in some way. No one gets better when they are exposed to these pollutants.”