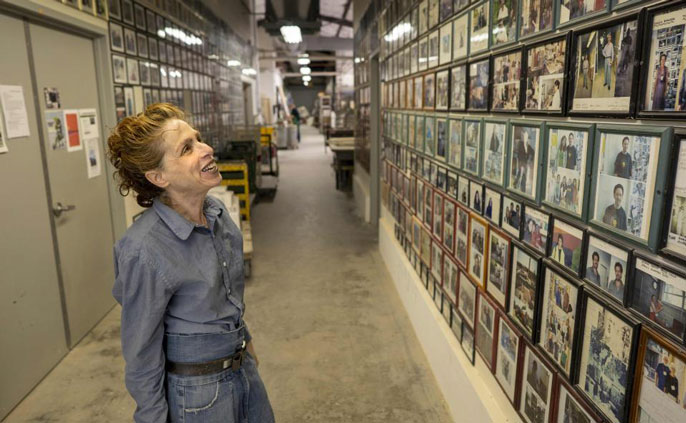 Annabeth Rosen, who is the Robert Arneson Professor of Art and Art History, UC Davis, shows a visitor the “gallery” of photos that line the walls of TB 9. The photos depict students and visitors through the years.

When world-renowned artist and UC Davis Professor Emeritus Wayne Thiebaud added a few more of his paintings to the university collection in 2016, the building that would be the university’s first art museum — the Jan Shrem and Maria Manetti Shrem Museum of Art — was still under construction.

Amid the rumble of heavy equipment and pounding hammers on a 106-degree day, he said he never reallythought he would witness a museum being built where he started teaching in the 1960s. Nor did he think his work, which is exhibited around the world, would be displayed there.

“No, I had imagined we’d get a Quonset hut way back in the sticks that no one would ever see.” Instead, the museum is located at a prime gateway to campus, he noted. “I’m very touched.”

A “Quonset hut” is where art at UC Davis more or less began, though. And art is still made there every day.

Many in the UC Davis art community view Temporary Building 9, or TB 9, a metal structure at Old Davis Road and Hutchison Drive constructed from old military surplus materials, as the main creative space on campus since the 1960s, when the art department grew there. The building, which has served as a police station, post office and food sciences area, is where Thiebaud and many of his lifelong friends and colleagues — the first-generation art faculty at the university’s first art department — created a place to work.

There, the group assembled as a “team of rivals” by founding art department chair Richard Nelson, including Thiebaud, Robert Arneson, William Wiley, Roland Petersen, Roy De Forest, Tio Giambruni and Manuel Neri, among others, freely made art in a 24-hour environment away from the distractions of the main campus and the rest of the world. Former students and faculty alike, many of them now internationally known artists, reminisce about the magical space that gave birth to the first-generation faculty and later-famous artists. They also reminisce about the heat — when summer days, along with the kilns and fiery foundry are rumored to have brought the temperatures to 120 degrees.

A modest building of national significance

Air conditioning, and heat, only came to the two main teaching studios in 2003, and to the individual studios in 2018-19. The same year that the Manetti Shrem Museum opened, in 2016, the building gained recognition for its importance in art history with its inclusion on the National Register of Historic Places and the California Register of Historical Resources.

It has always been known as a place where artists can freely create.

Arneson, creator of the “Eggheads,” and other UC Davis first-generation art faculty are among those associated with the California Funk and the Figurative movements of the mid-century. Arneson, often dubbed the father of the ceramic Funk movement, is most associated with TB 9, which housed the university’s ceramics facilities as well as other studios. He taught at UC Davis from 1962 until the year before his death in 1992. In the 1960s, when the art department began, two-thirds of the building held the art space and foundry, while food science and the post office occupied the rest of the building, according to artists who worked there. The artists eventually took over the whole place. The metal shell, with an outer garden and patio full of sculptures, looks much the same today.

Birthplace of an art movement

One of the last students to work under Arneson before his death was protégé Kathy Butterly, a nationally known artist whose own first retrospective exhibition will be shown at the Manetti Shrem Museum this summer. It accompanies “Landscape Without Boundaries,” an exhibition that features, among others, art from the museum collection by Arneson, Thiebaud and Wiley.

The “Kathy Butterly/ColorForm” exhibition travels through Butterly’s entire career with dozens of her sculptures and drawings, with an emphasis on the past 10 years. It is a homecoming of sorts, bringing Butterly back to the site of her MFA and to the Northern California region that has been so generative for ceramic art for a half-century.

“This was really the birthplace of a movement of art,” said Butterly, who now operates out of a living-working studio in New York. “And I was so excited to be here to study,” adding that all her student colleagues felt “these were the best two years of our lives.”

In Arneson, she found a kindred spirit. Arneson, who used TB 9 as his primary studio, which he once said was key to his effectiveness as a teacher, would go to great lengths to help his students. He often spent hours with them, in the studio, and over wine, beer and food ­­tried to help them be better artists by feeding their souls and their stomachs.

“All we talked about was art, day and night, and we worked all the time, 24 hours a day,” remembered Butterly. “You wanted to be in his presence. He was so smart and so gifted.”

To read more, visit UC Davis' multimedia story, “​A sojourner’s path: From a temporary building to the world and back.”