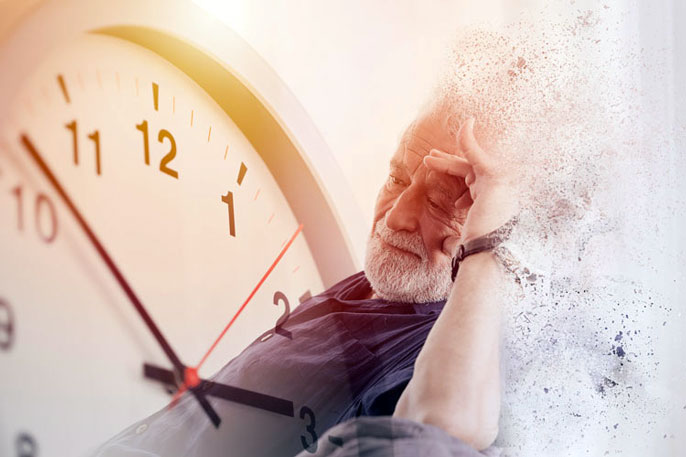 What would you do if you knew how long you had until Alzheimer’s disease set in? Don’t despair. New UC Berkeley research suggests one defense against this virulent form of dementia — for which no treatment currently exists — is deep, restorative sleep, and plenty of it.

Neuroscientists Matthew Walker and Joseph Winer have found a way to estimate, with some degree of accuracy, a time frame for when Alzheimer’s is most likely to strike in a person’s lifetime.

“We have found that the sleep you’re having right now is almost like a crystal ball telling you when and how fast Alzheimer’s pathology will develop in your brain,” said Walker, a UC Berkeley professor of psychology and neuroscience and senior author of the paper published today, Sept. 3, in the journal Current Biology.

“The silver lining here is that there’s something we can do about it,” he added. “The brain washes itself during deep sleep, and so there may be the chance to turn back the clock by getting more sleep earlier in life.”

Walker and fellow researchers matched the overnight sleep quality of 32 healthy older adults against the buildup in their brains of the toxic plaque known as beta-amyloid, a key player in the onset and progression of Alzheimer’s, which destroys memory pathways and other brain functions and afflicts more than 40 million people worldwide.

Their findings show that the study participants who started out experiencing more fragmented sleep and less non-rapid eye movement (non-REM) slow-wave sleep were most likely to show an increase in beta-amyloid over the course of the study.

Although all participants remained healthy throughout the study period, the trajectory of their beta-amyloid growth correlated with baseline sleep quality. The researchers were able to forecast the increase in beta-amyloid plaques, which are thought to mark the beginning of Alzheimer’s.

“Rather than waiting for someone to develop dementia many years down the road, we are able to assess how sleep quality predicts changes in beta-amyloid plaques across multiple timepoints. In doing so, we can measure how quickly this toxic protein accumulates in the brain over time, which can indicate the beginning of Alzheimer’s disease,” said Winer, the study’s lead author and a Ph.D. student in Walker’s Center for Human Sleep Science at UC Berkeley.

In addition to predicting the time it is likely to take for the onset of Alzheimer’s, the results reinforce the link between poor sleep and the disease, which is particularly critical in the face of a tsunami of aging baby boomers on the horizon.

While previous studies have found that sleep cleanses the brain of beta-amyloid deposits, these new findings identify deep non-REM slow-wave sleep as the target of intervention against cognitive decline.

And though genetic testing can predict one’s inherent susceptibility to Alzheimer’s, and blood tests offer a diagnostic tool, neither offers the potential for a lifestyle therapeutic intervention that sleep does, the researchers point out.

“If deep, restorative sleep can slow down this disease, we should be making it a major priority,” Winer said. “And if physicians know about this connection, they can ask their older patients about their sleep quality and suggest sleep as a prevention strategy.”

The 32 healthy participants in their 60s, 70s and 80s who are enrolled in the sleep study are part of the Berkeley Aging Cohort Study headed by UC Berkeley public health professor William Jagust, also a co-author on this latest study. The study of healthy aging was launched in 2005 with a grant from the National Institutes of Health.

For the experiment, each participant spent an eight-hour night of sleep in Walker’s lab while undergoing polysomnography, a battery of tests that record brain waves, heart rate, blood-oxygen levels and other physiological measures of sleep quality.

Over the course of the multi-year study, the researchers periodically tracked the growth rate of the beta-amyloid protein in the participants’ brains using positron emission tomography, or PET scans, and compared the individuals’ beta-amyloid levels to their sleep profiles.

Researchers focused on the brain activity present during deep slow-wave sleep. They also assessed the study participants’ sleep efficiency, which is defined as actual time spent asleep, as opposed to lying sleepless in bed.

The results supported their hypothesis that sleep quality is a biomarker and predictor of disease down the road.

Traveling into the future

“We know there’s a connection between people’s sleep quality and what’s going on in the brain, in terms of Alzheimer’s disease. But what hasn’t been tested before is whether your sleep right now predicts what’s going to happen to you years later,” Winer said. “And that’s the question we had.”

And they got their answer: “Measuring sleep effectively helps us travel into the future and estimate where your amyloid buildup will be,” Walker said.

As for next steps, Walker and Winer are looking at how they can take the study participants who are at high risk of contracting Alzheimer’s and implement methods that might boost the quality of their sleep.

“Our hope is that if we intervene, then in three or four years the buildup is no longer where we thought it would be because we improved their sleep,” Winer said.

“Indeed, if we can bend the arrow of Alzheimer’s risk downward by improving sleep, it would be a significant and hopeful advance,” Walker concluded.

In addition to Walker, Winer and Jagust, co-authors of the study are Bryce Mander at UC Irvine, Samika Kumar and Mark Reed at UC Berkeley, and Suzanne Baker at the Lawrence Berkeley National Laboratory.