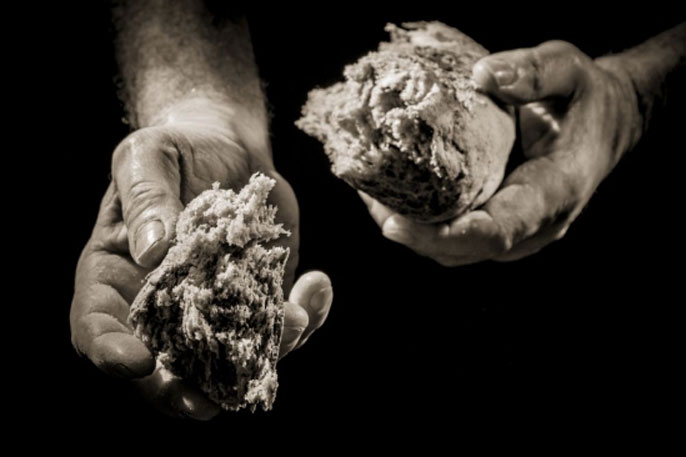 News headlines this summer paint a gloomy picture of conflict across the globe. These stories suggest that group differences — whether religious, ethnic, or political — seem to divide rather than unite us. Taking a broader perspective, however, humans exhibit little inter-group conflict compared to other primates.

Most remarkably, humans are far more open to exploring relationships with strangers. When and why people are willing to befriend strangers from other groups are fundamental questions addressed in a new paper in Nature Scientific Reports by UC Santa Barbara researchers Anne Pisor and Michael Gurven.

“Relative to other mammals, we’re really tolerant of other groups, which is hard to remember sometimes when we see Dallas, Orlando, Nice and Bavaria,” said Pisor, who recently completed her Ph.D. in anthropology at UC Santa Barbara and is now a postdoctoral scholar at the Max Planck Institute for Evolutionary Anthropology. “There’s a lot of archaeological and ethnographic evidence of humans maintaining friendly contacts with people of different ethnicities, religions or livelihoods — strangers from ‘over there’ doing something different. The question is, how did these relationships get started?”

Pisor and Gurven, professor in UC Santa Barbara's Department of Anthropology and chair of the Integrative Anthropological Sciences unit, suggest that the answer revolves around a means of buffering against risks and improving access to resources — be they food, clothes, shelter, mates, or even useful information. In our evolutionary past, these limited resources were not always available in one’s local community, but friendships across group boundaries could provide access. The same is true today in modern cities: we often hear about job opportunities from distant friends or acquaintances. “The same psychology affecting when we built out-group friendships in the past should be at work today,” Pisor said.

To explore the role of resource access in out-group friendships, Pisor and Gurven turned to three populations of lowland Bolivian small-scale farmers. These three populations vary widely in their reliance on markets and their exposure to other ethnic and religious groups. Participants played a game in which they had the opportunity to interact with “in-group” and “out-group” strangers — that is, strangers from the same ethnic or religious group as the participant, or from a different ethnic or religious group — by giving money to them. Unlike many similar economic experiments, donors could see pictures of potential recipients, and those receiving money learned the name of the generous (or stingy) donor — in other words, “signed, sealed and delivered,” Pisor joked. She intended participants to feel that a new relationship could emerge from these gifts, and participants seemed to agree: “For example, one man said, ‘If I ever meet this guy, I’m going to say I know him from your game,’ ” Pisor said.

Those who felt they had the least gave the most

Pisor and Gurven suggest that their approach builds on our existing understanding of between-group friendships in the social sciences: the importance of perceived opportunities for mutual gain, previously identified as a key ingredient to these friendships, is likely rooted in the between-group resource buffering crucial throughout human history and prehistory.

“Working among formerly isolated populations now experiencing rapid change provides a good opportunity to understand the conditions that help or hinder folks to work well with people of different backgrounds,” Gurven noted. “From maintaining access to territory, clean water and other natural resources — collaboration across group boundaries is crucial for many indigenous populations today.”

Evolutionary-minded researchers have a growing interest in studying inter-group cooperative relationships in humans, Pisor added. “We have been too preoccupied with thinking about inter-group conflict,” she said. “We know less about why humans are so prone to inter-group tolerance and friendship. A better understanding of ‘why’ will hopefully allow us to better nurture friendships that transcend group boundaries — and maybe reduce the volume of conflict we see in the news.”

For more UC research on human kindness, check out our video below: