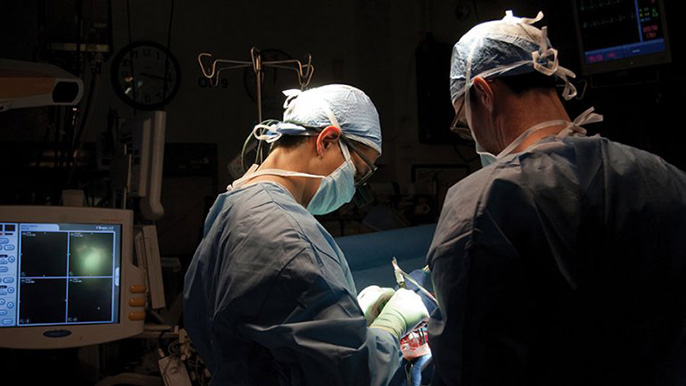 Neurosurgeon Eddie Chang, left, operates on a patient with epilepsy. Chang’s team is mapping the regions of the brain that trigger seizures while also studying the circuits that mediate mood.

In a hospital room at UC San Francisco’s Parnassus campus, a patient anticipates having an epileptic seizure. A dozen wires trail from her gauze-wrapped head to a bedside monitoring device. Hidden beneath gauze and bone lies an intricate network of electrodes – each roughly the size of a flattened grain of rice. They’ve been surgically implanted on the surface of her brain, with the goal of revealing the origin of her complex, near-weekly seizures. At the same time, she is volunteering as a participant in groundbreaking research on mood disorders like depression, as well as related disorders like anxiety.

This patient is one of about 60 who receive similar specialized surgical treatment annually from UCSF neurosurgeon Edward Chang, MD ’04, because a cure for their epilepsy is unusually elusive. The electrodes stay in place for up to three weeks as Chang and his colleagues at the UCSF Epilepsy Center map which region of their brain triggers the seizures in the hope that they can be alleviated through surgery.

These implanted electrodes also present a rare opportunity to study an even more elusive target: the source of human moods and emotions.

Simply being alive can be excruciating for those who suffer from severe depression or anxiety. Many derive little enjoyment from family, work or play; some have a hard time functioning; and for a few, mood disorders are so irremediable that they take their own lives. Yet just as lasting happiness evades those with intractable mood and anxiety disorders, definitive treatments have evaded those hoping to help such patients. For some, drugs and other therapies fail to fully resolve their suffering. For a few, treatment fails entirely.

But what if such troubles stem from flawed brain circuitry, which could be coaxed to support healthy neural processing instead? A research project headed by Chang aims to answer this question – and change the way we understand and treat mood disorders.

If successful, the project will for the first time map the networks in the brain that have gone awry, then remodel them to restore healthy functioning using a new type of device that could be permanently implanted in the brain. When the pathways corresponding with depression are activated, the pattern of activity would be picked up by specialized electrodes. The electrodes, which are currently in development, would emit a minute impulse. The stimulation would encourage the brain to shift its activity into new, healthier patterns – possibly for good.

“This would be revolutionary,” says Vikram Rao, PhD ’06, MD ’08, an assistant professor of neurology who’s on Chang’s team. “The problem is not that the whole brain is malfunctioning; it’s certain key circuits that mediate mood. The device would be able to intervene on those circuits and restore them to a more healthy state.”