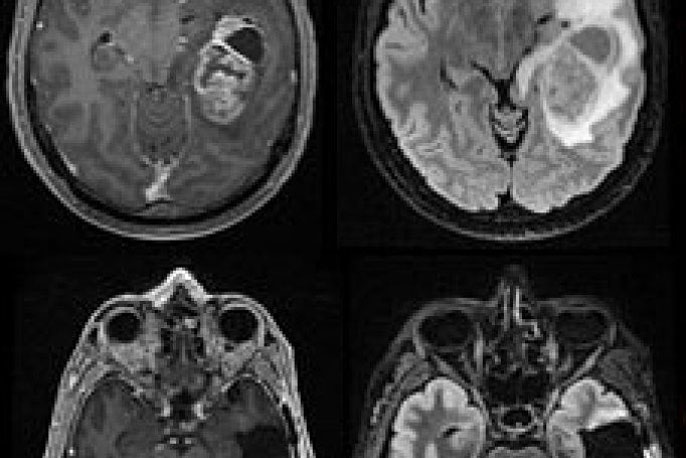 Immunotherapies that fight cancer have been a life-saving advancement for many patients, but the approach only works on a few types of malignancies, leaving few treatment options for most cancer patients with solid tumors. Now, in two related papers published April 28, 2021, in Science Translational Medicine, researchers at UCSF have demonstrated how to engineer smart immune cells that are effective against solid tumors, opening the door to treating a variety of cancers that have long been untouchable with immunotherapies.

By “programming” basic computational abilities into immune cells that are designed to attack cancer, the researchers have overcome a number of major hurdles that have kept these strategies out of the clinic up to now. The two new papers show that the resulting “smart” therapies are more precise, flexible and thorough than previous approaches, and the researchers say that their approach may be ready for clinical trials in the near future.

In one paper, research teams led by Wendell Lim, Ph.D., chair and Byers Distinguished Professor of cellular and molecular pharmacology, and Hideho Okada, M.D., Ph.D., the Kathleen M. Plant Distinguished Professor of neurological surgery, tested the system in glioblastoma, the most aggressive form of brain cancer that affects adults and children, and which physicians have yet to successfully treat with immunotherapies due to the complexity of the tumors. The team showed the new system, which uses a two-step process to hunt down cancer cells, could completely clear human patient-derived tumors from the brains of mice without the dangerous side effects or high risk of recurrence currently associated with immunotherapy treatment in solid tumors.

In the second paper, Kole Roybal, Ph.D., assistant professor of microbiology and immunology, and Bin Liu, Ph.D., professor of anesthesia at UCSF, led a study showing how components of this system can be switched out like the heads of an interchangeable screwdriver to target other difficult-to-treat cancers in other parts of the body. The team also identified a particularly important set of “screwdriver heads'' that could make powerful tools against cancers of the ovaries, lungs and other organs, which together kill tens of thousands every year.

In addition, both papers address the issue of so-called “T-cell exhaustion,” a long-standing challenge in which traditional CAR-T cells — the re-programmed intruder-hunting immune cells behind some of the most promising cancer immunotherapies — tire out when engaged in prolonged battles against the cancer. The new smart cells stay consistently strong through the entire fight, conserving their energy by switching to a standby mode when not directly engaged with the cancer.

“These findings address all critical challenges that have been in the way of developing immunotherapies for patients who suffer from these cancers,” said Okada, who also serves as director of the Brain Tumor Immunotherapy Center at UCSF. “This science is ready to move towards clinical trials.”

Glioblastomas are a particularly tragic case in which patients so far haven’t been able to benefit from CAR-T cells. Every year, over 20,000 adults in the United States are diagnosed with glioblastoma or other types of malignant brain cancer, and with current treatments, the prognosis is grim.

“It’s like a death sentence,” says Okada, noting that brain tumors are also the leading cause of cancer-related mortality and morbidity in children. “The outcome for malignant brain tumors in kids remains dismal.”

Okada, who is an expert in brain cancers, partnered with Lim, who was developing novel cell engineering technologies, in the hopes of changing this.

Targeting other molecules came with the opposite, but equally perilous problem. Though some molecules are found on glioblastoma cells, they’re also found on healthy, non-brain tissues such as the liver, kidney, esophagus and genital organs. Targeting cells that display these molecules with CAR-T could damage healthy tissue and put patients in danger. This catch-22 leaves clinicians without an ideal molecular target, a pervasive problem that has thwarted CAR-T’s use in most solid tumors.

The scientists devised a solution to this problem by employing a system called synNotch, a customizable molecular detector that Lim’s lab has been perfecting for several years. The synNotch system lets scientists program CAR-T cells to detect specific molecules found on the surface of cancer cells, ensuring that CAR-Ts attack only when they encounter the molecules they’re programmed to target.

To kill glioblastomas, the team took a novel, two-step approach. The first step uses synNotch to give CAR-Ts the ability to carefully judge if they are in a tumor versus other parts of the body, while a second set of synNotch sensors ensures a strong and comprehensive tumor killing response. Once the CAR-T cells confirm that they are in the tumor, the second set of sensors are activated, allowing the CAR-Ts to detect and kill glioblastoma cells based on multiple brain-tumor molecules. This two-step process leads to more complete tumor killing and prevents tumor cells from accumulating simple mutations that would allow them to evade CAR-Ts.

Experiments described in the paper show that this strategy is effective. In mice with human patient-derived glioblastomas, synNotch CAR-Ts wiped out tumors that weren’t cleared by normal T-cells or traditional CAR-Ts, with no signs of dangerous side effects.

“We’ve been saying for a while that we should think of these cells like computers — smart enough to integrate multiple data points and make complex choices,” said Lim, who also directs the Cell Design Institute at UCSF. “Now we’re seeing this working in a real-world model of a very deadly cancer for both adults and children.”

SynNotch is a flexible, powerful system for building smarter immunotherapies

The second paper further demonstrated the efficacy of this approach by identifying additional molecular targets for the synNotch system. The researchers searched public cancer databases for molecules found in tumor cells that could be useful in CAR-T therapies against now-intractable diseases. They found a molecule called ALPPL2 that’s common to many forms of cancer, including the asbestos-driven mesothelioma as well as ovarian, pancreatic and testicular malignancies. Importantly, the molecule is rarely found in healthy tissue.

In tests of synNotch circuits that were engineered to detect ALPPL2, CAR-T cells were able to recognize and kill mesothelioma and ovarian cancer cells with precision. “We can build cells that recognize ALPPL2 and then upregulate other sensors against more general tumor antigens,” said Roybal, also a founding member of the Cell Design Institute. “This is a completely viable, clinical grade antigen we can use to build cell therapies for use in people.”

A striking finding from both studies is that synNotch CAR-Ts maintained stable levels of activity throughout the cancer killing process, eliminating the challenge of T-cell exhaustion, which hinders traditional CAR-T therapies. Researchers believe exhaustion occurs because traditional CAR-Ts are designed to continuously express a kill switch, meaning they are always on and eventually deplete their resources, leading to a “cell that isn’t doing much of anything,” Roybal said.

“Amazingly this wasn’t the case in our synNotch systems,” he said. The researchers found that synNotch CAR-T cells remain in standby mode until they identify the cancer, conserving their energy. “These papers show that there are a variety of reasons these synNotch T-cells could be better than the current state-of-the-art CAR-T cell technology.”