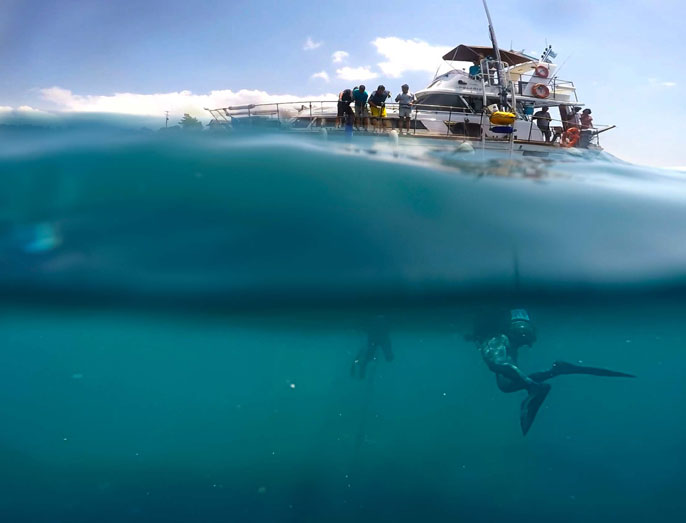 Exploring the depths of the seas, and human history, is the goal of the Scripps Center for Marine Archaeology (SCMA).

Hidden coastlines around the world contain clues about ancient civilizations. The mysteries locked in these coastal sites where human activity once flourished are now submerged under rising seas. A trove of cultural artifacts and environmental data are waiting to be discovered.

Scripps Institution of Oceanography and the Department of Anthropology have recently joined efforts within UC San Diego to launch the Scripps Center for Marine Archaeology (SCMA). Researchers with the center will conduct fieldwork at key underwater and coastal archaeological sites around the world, studying the influence of marine environments on human cultures. Think Indiana Jones meets the sea.

“For more than a century, Scripps Oceanography has been at the forefront of scientific exploration and discovery of the ocean, and for years there has been a demonstrated interest in opening a center focused on marine archaeology,” said Scripps Director Margaret Leinen. “The center will help advance marine archaeology as a field, and on a larger scale, will help scientists explore ways to better understand and protect our planet — a strategic initiative here at UC San Diego.”

“As much as the marine environment influences human culture, it works the other way around too — cultures influence their environments,” said Carol Padden, Dean of UC San Diego’s Division of Social Sciences. “With social scientists and marine scientists working together in one center, we will be studying the relationship between society and the sea from both angles, increasing our knowledge of the past for a better future.”

The Scripps Center for Marine Archaeology was co-founded by Scripps geophysicist Walter Munk and former Institute of Geophysics and Planetary Physics Green Fellow Damien Leloup, who began his career aboard research vessels Calypso and Alcyone working with Jacques Cousteau. Munk and Leloup raised more than $400,000 in seed donations and secured approval to form the center in September 2015.

Following the groundwork laid out by Munk and Leloup, Scripps oceanographer John Hildebrand and Division of Social Sciences anthropologist Thomas Levy will be the first leaders of the center. SCMA also includes a number of collaborators and scientists from such disciplines as oceanography, marine technology, sedimentology, geomorphology, climate sciences, environmental sciences, anthropology, and archaeology.

“The goal is to integrate the expertise in various UC San Diego departments, like anthropology, with the expertise here at Scripps Institution of Oceanography that focuses on the ocean,” said Hildebrand, co-director of SCMA. “By putting these two together, we have a really powerful force for studying both people on land that are using marine resources and also cultural resources that are now submerged.”

“It all came together thanks to the vision of Walter Munk, and with his support, we got on a roll,” said Levy, co-director of SCMA and director of the Center for Cyber-Archaeology and Sustainability at UC San Diego’s Qualcomm Institute. “It's really essential to do collaborative work between archaeologists and marine scientists. We have the best of both worlds here at UC San Diego and it couldn’t be better.”

SCMA differentiates itself from other marine archaeology programs because it won’t focus solely on shipwrecks, the domain of nautical archaeology. Rather it will explore human societies in coastal zones and adaptation processes to climate and environmental changes.

The researchers note that over the past 20,000 years there have been significant environmental changes, including warming of the planet and rising sea levels. By understanding the role of the oceans in past human cultural development, the scientists can put the present into a long-term context.

“The seashore that we explore, use, and experience today is not the same as in the past, so we can look at the past to understand and improve our solutions to the present problems that we are facing with climate change,” said environmental archaeologist Isabel Rivera-Collazo, an SCMA collaborator.

Rivera-Collazo is a new joint hire at UC San Diego, where she serves as an assistant professor at both Scripps Oceanography and the Department of Anthropology. Levy and Scripps geophysicist Lisa Tauxe initiated this new cross-campus position, which bridges Scripps and the Division of Social Sciences.

Researchers with the new center will explore underwater sites through the use of traditional diving apparatuses as well as with innovative technologies such as remotely operated vehicles, seabed coring, and various sonars to help detect cultural remains on and beneath the seafloor.

SCMA investigators have already been involved in several expeditions, including Leloup’s participation in the international Vietnam Maritime Archaeology Project (VMAP) led by Flinders University Maritime Archaeology Department in the spring of 2016, and a scientific expedition in Greece to study the Late Bronze Age collapse of the Mycenaean civilization led by Levy and Scripps paleobiologist Richard Norris in the summer of 2016.

Over the next two years, the center plans to launch a series of research projects in the eastern Mediterranean, southern Peru, Puerto Rico, Belize, and along the California coast.

“There are hidden coastlines all around the world where civilizations and cultures flourished, and so that’s the place that we want to sample when we do these studies,” said Levy, holder of the Norma Kershaw Chair in the Archaeology of Ancient Israel and Neighboring Lands at UC San Diego. “One of the reasons we’re especially interested in the Old World is because many of the developments of early civilizations occurred there, and it’s a really hot area for research.”

SCMA envisions serving as the central research hub and institutional platform for students, faculty, and other researchers working on understanding the relationship between people and the sea, as well as climate and environments worldwide. The center plans to share its discoveries through a state-of-the-art database and website, publications and peer-reviewed studies, press releases, and possibly through future exhibits at Birch Aquarium at Scripps.

“As we ramp up the Scripps Center for Marine Archaeology, we want to have public participation, and this will include seminars and workshops for people to come and get involved,” said Hildebrand.

Learn more about SCMA and future research expeditions at scma.ucsd.edu.