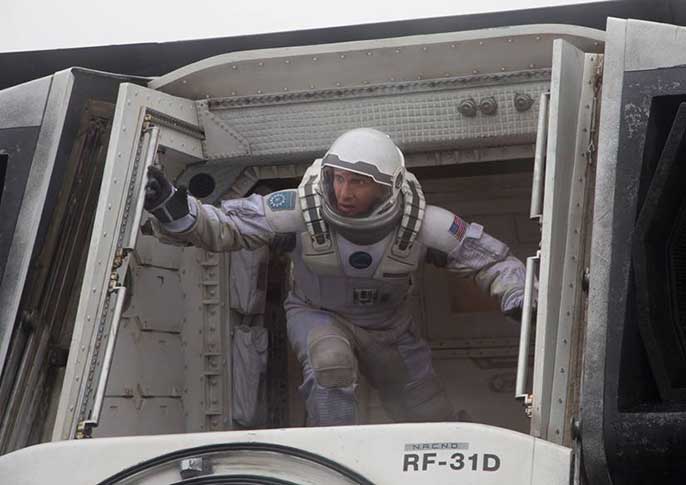 David Schlegel’s eyes have been aimed at the stars since he was a kid.

As an adult, he’s helped to map the cosmos in awesome detail. Schlegel, a senior scientist at Berkeley Lab, worked on the Sloan Digital Sky Survey as a young scientist. (Click here to “fly” through the universe care of the SDSS images.) In the years since, he’s collaborated on a variety of other mapping projects. He’s currently working on the Berkeley Lab-managed Dark Energy Spectroscopic Instrument (DESI), a project being designed to produce the largest 3D view of the universe while exploring mysteries of dark energy.

Schlegel’s propensity for spaceward thinking made him a great candidate for a science discussion about the new film "Interstellar." The film features astronauts who take a wormhole ride to another galaxy to explore planets around a massive black hole. In a conversation last week, Schlegel discussed the science in the movie and what Hollywood could learn from scientists about fantastic settings in outer space.

What kind of science fiction filmgoer are you? Do you pay close attention to the science or do you tend to just go along for the story?

David Schlegel: So many sci-fi movies are really fantasy, and for these, I let a lot of stuff slide. But a science fiction world is one that’s still allowed by what we understand of the laws of nature. "Interstellar" was definitely more science fiction than fantasy, so I paid attention to the science.

Schlegel: Like wormholes. That’s a great example. They probably don’t exist. At the moment you can write down the math and the math works, but there’s probably no way to get the universe into that configuration.

On the other hand, the universe does tend to generate these things: Black holes were first written down as a mathematical curiosity, not as a prediction. Then people took them seriously. Now we have evidence that a supermassive black hole exists at the center of many galaxies, including our own.

Tell me about the black hole in the film. How legitimate were the affects it had on the nearby planets and explorers?

Schlegel: At the end of the movie, they kind of took some liberties and went beyond what we know today. We haven’t actually tested the laws of physics inside a black hole. But there was so much more science explanation compared to most films, and I enjoyed that. Even things that at first you think would be a Hollywood prop, like the giant tidal wave coming through on that first planet, you realize could be legitimate. I don’t know if the waves were precisely correct as they were shown, but they’re pretty close.

[Schlegel goes to his chalkboard and draws a picture of a black hole and a planet with two lobes on its near and far side: distortion of water produced by the black hole’s gravity.]

At these two locations, there are lobes of water, and the planet rotates underneath them. The planet meets the water. It’s just like on Earth and the way the moon pulls the oceans. When the tide comes in, it’s really the Earth rotating to meet one of these lobes. Except in the movie, the gravity from the black hole is much stronger than what we experience from the moon, so the tides are much larger.

What about the way time is affected by the black hole’s gravity? One hour on the nearby planet is equivalent to seven years back on Earth.

Schlegel: That’s one of the most intriguing parts of the movie. That’s just science. It’s not really science fiction. I mean, it’s science fiction to get near a black hole, but it’s completely legitimate science. If you’re near a massive black hole, the closer you get to an event horizon, the bigger the difference will be between time where you are and time further away from the black hole.

How easy is it to calculate the time differential between a black hole and Earth?

Schlegel: Anyone who takes a general relativity (GR) class learns how to do that. The thing that makes it different for the black hole in "Interstellar" is that it’s a spinning black hole. That makes it much more complicated. Normally when you’re encoding these problems, time and space can be your grid. But with spinning black holes, space isn’t flat and time doesn’t run at the same rate; it’s not a simple coordinate system.

It’s a solved problem now, but when I was a student, it was controversial and there were disagreements over what this would look like. You needed to wait until you could do computational GR on a massive scale to compute what was happening. It took a long time for the experts to figure out how to do it.

Schlegel: I think Hollywood usually completely ignores the science. Most of the time it seems like someone’s already written the plot and it doesn’t matter if the science fits or not. I hope this movie is successful because it raises the bar. I don’t think you could have written the plot without talking through these things with a scientist. Maybe the future of science fiction will be one where Hollywood works more closely with scientists in plot development.

[Note: Kip Thorne, a physicist from Caltech, advised on the film and plans to publish two scientific papers on research he conducted to make the physics and imagery for "Interstellar’s" black hole as accurate as possible.]

If you advised on a sci-fi movie, what kind of unusual or dramatic science would you suggest?

Schlegel: A lot of what makes science fiction so fun is the setting, but usually the settings are pretty traditional: a planet that’s Earth-like around a star that’s star-like. Interstellar did something different by putting planets around a black hole. But another setting could be near the center of the Milky Way. There’d be a lot more planets than where we are because there’s more enrichment of heavy elements near the center of the galaxy.

If you lived there everything would look dramatically different. When you look up at the sky rather than a faint twinkle of stars, everything would be really bright. You might not have nearly as much of a nighttime. And you wouldn’t be able to see outside the Milky Way. There’d also be more radiation from various events. It might speed up evolution — more DNA damage and more repair. Supernova explosions would strike you more often. If you just think about dropping yourself at various spots in the universe, you can get some places that are pretty different and pretty dramatic.