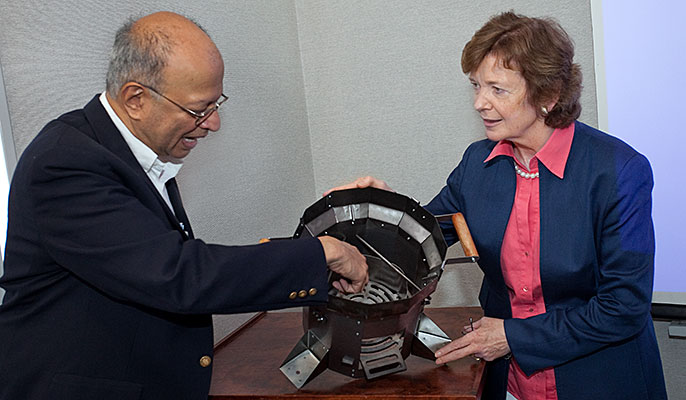 Ashok Gadgil demonstrates use of the Darfur stove to Mary Robinson, former president of Ireland and former UN High Commissioner for Human Rights.

When Ashok Gadgil arrived in Washington this spring to be inducted into the National Inventors Hall of Fame, a quote on the back of the event program spoke directly to his own personal philosophy.

It was from Abraham Lincoln: “The patent system added the fuel of interest to the fire of genius.”

“This is the first time the body made a decision not just to recognize patents which have led to improvements in the developed world, but also began to say, what do invention and patent do for the bottom 3 billion people?” Gadgil says of his induction, seated in his office above the UC Berkeley campus. “It signals to those of us who work on problems not because they’ll lead to corporate profit or a better weapons system, that this is another important role of creativity.”

Gadgil was one of 15 inventors admitted into the Hall of Fame this year. He was inducted specifically for UV Waterworks, a disinfecting device that uses ultra violet light to generate the electricity needed to kill pathogens in water. The technology provides safe drinking water for 5 million people every day in deep rural communities of India, the Philippines and Ghana.

Gadgil (pronounced GOD-gill) directs the Energy and Environmental Technologies Division at Lawrence Berkeley National Laboratory. His other inventions include a fuel-efficient cookstove and a method to remove arsenic from groundwater. Overall, his body of work has helped millions of others, in the spirit of what Lincoln called “the fuel of interest” combined with humanitarianism.

“My goal was to see what people could pay if they make $1 or $2 a day,” Gadgil says. “We are asking for 2 cents for 10 liters, so they can avoid getting diarrhea several times a year.”

UV Waterworks has saved an estimated 1,000 children’s lives, Gadgil said. “That’s not too bad, though the number could be 10 or 50 times larger.”

While Gadgil invented the system, the UC Regents hold the patent and the publicly traded corporation WaterHealth International lined up investors, including Johnson & Johnson and Dow Chemical.

Also making an impact is the Berkeley Darfur Stove, which replaces the traditional “three stone” cooking fire for Darfuri refugees in western Sudan. The old method of cooking required women to walk — for up to seven hours, five times a week — outside the safety of the camps to collect wood. Encounters with armed militia during those treks almost certainly result in rape.

In 2005 Gadgil led a fact-finding mission to Darfur, interviewing women and observing how they cook. He realized he could design a stove that uses 75 percent less fuel to cook the same amount of food in the same pot, reducing the number of firewood collection trips.

The stoves were designed at Lawrence Berkeley Lab but are manufactured in a factory in Darfur and sold for $20 each, generating income for factory workers. Some 15,000 cookstoves are in use in Darfuri camps, plus additional stoves modified for use in Ethiopia.

Gadgil's team continues to refine the cookstove technology, in pursuit of even cleaner ways to use biomass fuel. Another project, however, hearkens back to clean drinking water. Gadgil and his lab developed a method to remove naturally occurring arsenic from groundwater in Bangladesh and India, binding iron to microscopic arsenic molecules so they become large enough to be captured by a filter. The technology recently was licensed to an Indian business with a plan to install filtration plants in villages where the water will be sold.

The existence of a business model is core to Gadgil’s guiding principles as an inventor. While some of his colleagues in science turn their nose at the idea of making a profit from research, Gadgil — who applied to business school before engineering graduate studies — sees sustainability and potential in financial gain.

'A model where everybody prospers'

“You cannot go to scale and help a billion or 2 billion people without everybody along the way making a dime,” he says. “Charity is critical to filling cracks in the system, but there is not enough charity to go around. If you want to lift people from an existence we consider beneath human dignity, you have to have a model where everybody prospers.”

Gadgil was not always so focused on using his skills to help people in the developing world. As a student at the Indian Institute of Technology Kanpur he worked hard, did well in school and that was enough.

In 1971 Gadgil had an acceptance letter from every university to which he had applied, except Berkeley. He was about to start courses at CalTech when the letter came from Berkeley to say that they had secured funding to offer him a spot in the graduate civil engineering program.

“A friend of mine told me that Berkeley is a deep and vast ocean and that I would not experience the intellectual depth anywhere else,” he recalls. “He was right. I took courses in everything under the sun. I could sit in the back of the room and take classes in political economy of development.”

He recalls a lesson from one of his professor, former Cal physicist Arthur Rosenfeld: A good scientist takes in the bigger picture of how the real world works.

“I was just very, very good at physics,” he says. “Being here doing my Ph.D. changed my thinking. I credit that to the Berkeley experience.”