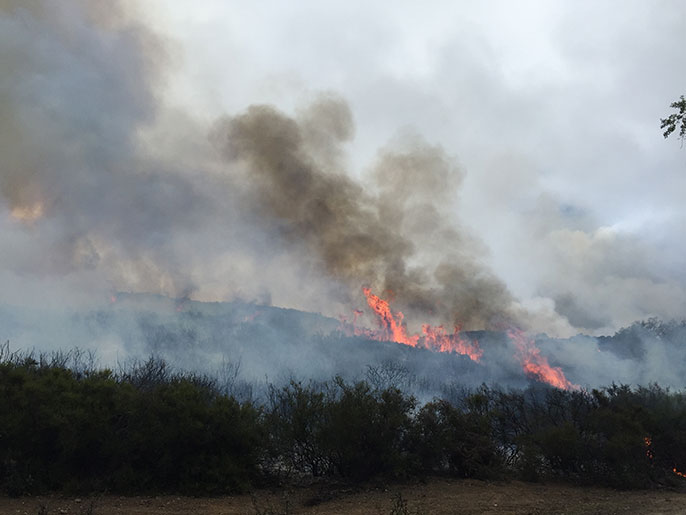 A new study examining wildfires in California found that human activity explains as much about their frequency and location as climate influences. The researchers systematically looked at human (anthropogenic) behaviors and climate change together, which is unique and rarely attempted on an area of land this large.

The findings suggest many models of wildfire predictions do not accurately account for anthropogenic factors and may therefore be misleading when identifying the main causes/drivers of wildfires. The newest model proportionately accounts for climate change and human behavioral threats and allows experts to more accurately predict how much land is at risk of burning in California through 2050, which is estimated at more than 7 million acres in the next 25 years.

Climate change affects the severity of the fire season and the amount and type of vegetation on the land, which are major variables in predicting wildfires. However, humans contribute another set of factors that influence wildfires, including where structures are built, and the frequency and location of ignitions from a variety of sources — everything from cigarettes on the highway, to electrical poles that get blown down in Santa Ana winds. As a result of the near-saturation of the landscape, humans are currently responsible for igniting more than 90 percent of the wildfires in California.

"Individuals don't have much control over how climate change will effect wildfires in the future. However, we do have the ability to influence the other half of the equation, those variables that control our impact on the landscape," said Michael Mann, assistant professor of geography at George Washington University and lead author of the study. "We can reduce our risks by disincentivizing housing development in fire-prone areas, better managing public land, and rethinking the effectiveness of our current firefighting approach."

The researchers found that by omitting the human influence on California wildfires, they were overstating the influence of climate change. The authors recommend considering climate change and human variables at the same time for future models.

"There is widespread agreement about the importance of climate on wildfire at relatively broad scales. At more local scales, however, you can get the story quite wrong if you don't include human development patterns," said co-author Max Moritz, UC Cooperative Extension fire ecology specialist whose lab is at the University of California, Berkeley. "This is an important finding about how we model climate change effects, and it also confirms that getting a handle on where and how we build our communities is essential to limiting future losses."

Between 1999 and 2011, California reported an average of $160 million in annual wildfire-related damages, with nearly 13,000 homes and other structures destroyed in so-called state responsibility areas - fire jurisdictions maintained by California, according to Mann. During this same period, California and the U.S. Forest Service spent more than $5 billion on wildfire suppression.

In a model from 2014 that examined California wildfires' destruction over the last 60 years, Mann estimated that fire damage will more than triple by mid-century, increasing to nearly half a billion dollars annually.

"This information is critical to policymakers, planners, and fire managers, to determine wildfire risks," he said.

The paper, "Incorporating Anthropogenic Influences into Fire Probability Models: Effects of Human Activity and Climate Change on Fire Activity in California," published Thursday in PLOS ONE.