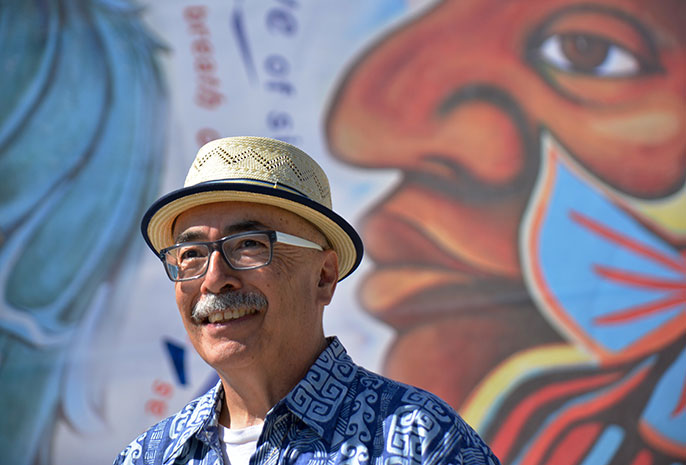 University of California, Riverside poet Juan Felipe Herrera, whose passion for poetry delighted Californians of all ages during a two-year appointment as the state’s poet laureate, has been named United States poet laureate.

The one-year appointment of Herrera as the nation’s 21st Poet Laureate Consultant in Poetry was announced today by Librarian of Congress James H. Billington.

“I see in Herrera’s poems the work of an American original — work that takes the sublimity and largesse of ‘Leaves of Grass’ and expands upon it,” Billington said in a written statement. “His poems engage in a serious sense of play — in language and in image — that I feel gives them enduring power. I see how they champion voices and traditions and histories, as well as a cultural perspective, which is a vital part of our larger American identity.”

Herrera, who retired in March as a professor of creative writing at UC Riverside, will participate in the 2015 National Book Festival in Washington, D.C., on Sept. 5. His inaugural reading as poet laureate will take place on Sept. 15.

UC Riverside Chancellor Kim A. Wilcox said he was delighted by Herrera’s appointment.

“For the last two years, Juan Felipe Herrera has brought his love of the written and spoken word to audiences across California as our state’s poet laureate, delighting and inspiring them with the beauty of poetry,” Wilcox said. “Now, he will do the same for people across the U.S. We are so pleased at this latest recognition of Juan Felipe’s talents and proud of his many years of teaching at UC Riverside.”