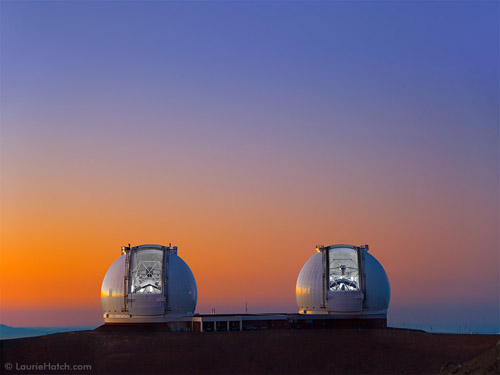 Atop Mauna Kea in Hawaii, the Keck Observatory is quietly revolutionizing what's known about the universe.

Scientists, using the powerful twin telescopes there, found evidence that the universe is expanding at an accelerating rate. They detected a supermassive black hole at the center of the Milky Way and uncovered the first planets outside our solar system.

And it was observations from the Keck telescopes that led to Pluto's demotion from planet to "dwarf planet."

Those are just some of the mind-boggling cosmic discoveries to come from the Keck Observatory, which this week celebrates its 20th anniversary.

"The scientists who work on the summit of Mauna Kea grapple with fundamental questions regarding the origin and nature of our universe," said UC President Mark G. Yudof, in congratulating Keck on two decades of stellar achievement.

"Like a ripple effect, the new knowledge gained transforms other scientific disciplines. It transforms coursework at every level of education. And it even transforms the ways in which artists and writers depict the cosmos."

The facility, which is managed jointly by the University of California and the California Institute of Technology, houses the largest fully steerable optical/infrared telescopes on Earth, capable of seeing fainter and further into the universe than any other research facility.

The two telescopes each stand eight stories tall, weigh 300 tons and operate with nanometer precision. The telescopes' primary mirrors are 10 meters in diameter and are composed of 36 hexagonal segments that work in concert as a single piece of reflective glass.