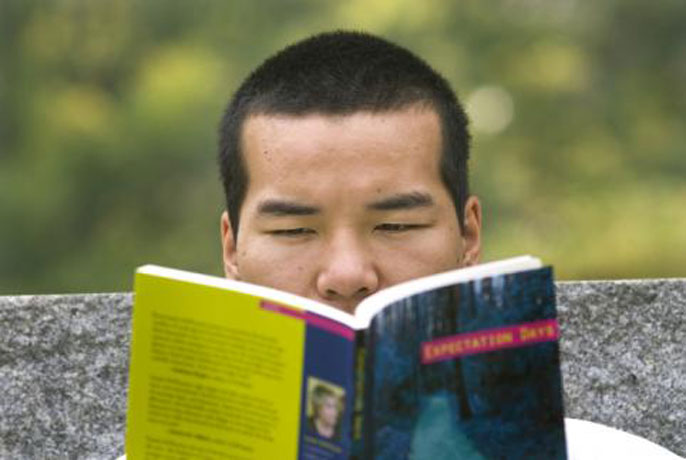 Neuroscientists at UC Davis have come up with a way to observe brain activity during natural reading. It’s the first time researchers have been able to study the brain while reading actual texts, instead of individual words, and it’s already helping settle some ideas about just how we read.

“It’s a key advance in understanding reading in the brain, because people are just reading normally,” said John Henderson, professor of psychology at the UC Davis Center for Mind and Brain. The work was published April 6 in the Journal of Neuroscience.

Until now, neuroscientists have only measured brain activity as a volunteer fixes his or her attention on individual words. The signals of brain activity from functional magnetic resonance imaging, or fMRI, last for several seconds — too slow to keep up with natural reading, which processes several words a second.

Instead, Henderson and colleagues combined functional MRI with eye tracking. Lying in an MRI scanner, subjects read text on a screen while the eye-tracking device registers which word they are paying attention to at any given time. They call this new method fixation-related, or “FIRE” fMRI.

“By tracking their eye movements as they read natural paragraphs, we can know which word they are attending to, and see the neural signal for fixation on each word,” Henderson said.

To test these ideas, Henderson and colleagues scored the nouns in their test paragraphs for “manipulability”: do they refer to real objects that can be manipulated to some degree?

As volunteers read the manipulable nouns, areas of the brain that deal with manipulation and carrying out physical actions lit up, lending support to the view that words are represented in the brain by connections with real actions.

By providing a window into brain activity during natural reading, the FIRE-fMRI technique allows the UC Davis group to look at all kinds of unanswered questions, Henderson said, such as whether language and grammar are handled by a specific part of the brain, and whether the brain anticipates upcoming words as we read. These discoveries would have implications not just for human psychology but also for artificial intelligence, he said.

The research has potential implications for understanding dyslexia and other reading deficits, Henderson said.

Co-authors on the paper are Rutvik Desai and Vicky Lai, University of South Carolina; and Wonil Choi at the UC Davis Center for Mind and Brain. The work was supported by grants from the National Science Foundation and National Institutes of Health.