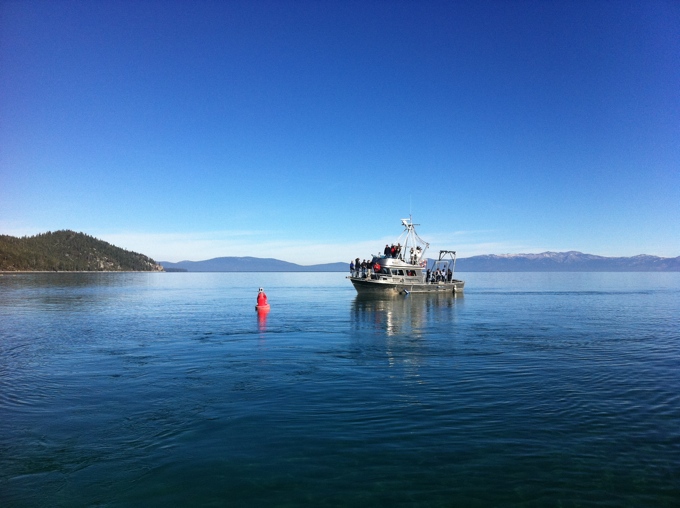 About the Tahoe Environmental Research Center

The UC Davis Tahoe Environmental Research Center is a world leader in research, education and public outreach on lakes, their surrounding watersheds and airsheds, and the human systems that both depend on them and impact them. The center, with laboratories and offices in Incline Village, Nev., Tahoe City, Calif., and the UC Davis campus, provides critical scientific information to help understand, restore and sustain the Lake Tahoe Basin and other systems worldwide.

Lake Tahoe’s clarity improved in 2012 for the second year in a row, and its waters were the clearest in 10 years, according to University of California, Davis, scientists who study the lake.

Last year’s average annual clarity level was 75.3 feet, or a 6.4-foot improvement from 2011, according to data released today by the UC Davis Tahoe Environmental Research Center and the Tahoe Regional Planning Agency.

The lake’s clarity is measured by the depth at which a 10” white disk, called a Secchi disk, remains visible when lowered beneath the water’s surface. The measurements have been taken since 1968, when the Secchi disk could be seen down to an average of 102.4 feet.

The annual clarity level is the average of 22 individual readings taken throughout the year. The highest individual value recorded in 2012 was 107 feet, and the lowest was 57 feet.

Researchers provided measurements for last year’s winter (December–March) and summer (June–September) months. Winter clarity last year continued a long-term pattern of improvement, with the best clarity since 1996. The winter average of 88.3 feet in 2012 was well above the worst point seen in 1997 and a combined 12-foot improvement for the past two years.

At 64.4 feet, summer clarity improved 13 feet from the 2011 value, but researchers say the persistent trend is still one of declining summer clarity.

“The improvement we see in both the summer and winter clarity during 2012 is very encouraging,” said Geoffrey Schladow, director of the UC Davis Tahoe Environmental Research Center. “The lake will continue to be subjected to a range of disturbances, each of which has the potential to impact clarity. There is now growing belief that managing for clarity is possible.”

The rate of decline for average annual clarity in the past decade has been better than in recent decades. In 1997–98, annual clarity reached an all-time average low of 65.1 feet. This year’s value is an improvement of more than 10 feet on that period, but still 22 feet short of the clarity restoration target of 97.4 feet set by federal and state regulators.

Urban stormwater runoff has long been a contributor to reduced clarity at the lake. Most of that runoff occurs during the winter and spring, when rain and snowmelt carry small, inorganic particles from the land, roads and other developed areas into the lake.

Yet, despite wet winters during 2011 and 2012, clarity improved. Researchers say this could indicate that efforts led by the Tahoe Regional Planning Agency, other management agencies, local jurisdictions and private property owners to reduce urban stormwater runoff are having a positive impact. However, the researchers emphasize that they need more data on stormwater to make more definitive conclusions.

The Tahoe Regional Planning Agency is leading a collaborative Environmental Improvement Program that supports achievement of environmental standards at the lake, with clarity being among the most important.

“Average annual clarity is again moving in a positive direction,” said Joanne S. Marchetta, executive director of the Tahoe Regional Planning Agency. “With passage of the Regional Plan Update that focuses on the Environmental Improvement Program and water quality treatments in town centers where they are most needed, we expect to see this trend continue.”

“We are very excited about the results from 2012, especially within the context of the long-term record for annual and winter clarity,” said John Reuter, associate director of the UC Davis Tahoe Environmental Research Center. “It is particularly encouraging to see clarity improve during wet years when the amount of fine sediments and nutrients going into the lake is high.”

More information about environmental factors affecting Lake Tahoe will be included in the 2013 State of the Lake Report, expected this summer.

Funding for the clarity analyses comes from the Tahoe Regional Planning Agency.