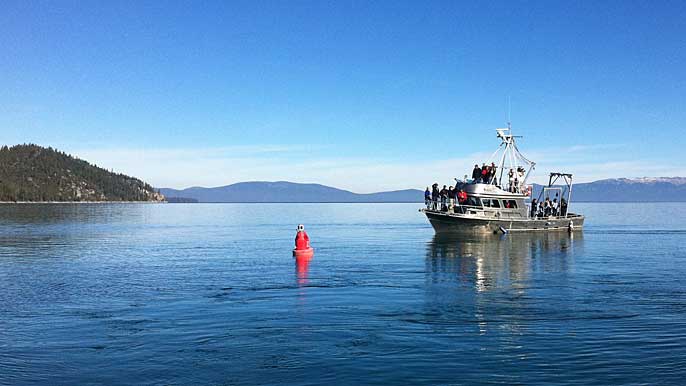 Clarity levels within the iconic blue waters of Lake Tahoe continued a decadelong trend of stabilization in 2013, according to University of California, Davis, scientists who study the lake.

Data released today by the UC Davis Tahoe Environmental Research Center and the Tahoe Regional Planning Agency reported the average annual clarity level for 2013 at 70.1 feet. While the reading represents a 5 foot decrease over the previous year, it is still well above the lowest value recorded in 1997 of 64.1 feet and above recent years' averages.

The clarity level this year is the average of 25 individual readings taken throughout the year. The highest individual value recorded in 2013 was 90 feet, and the lowest was 49 feet, due to seasonal variations.

Researchers provided measurements for both winter (December-March) and summer (June-September) months. Winter clarity last year continued a long-term pattern of improvement that has been evident since 1997. The winter average of 77.9 feet in 2013 was well above the worst point seen in 1997, although 10 feet less than in 2012. Large stream inflows in winter of 2012/2013 were mainly responsible for the lower values.

At 63.8 feet, summer clarity was almost identical to the 2012 value (64.4), but the persistent trend is still one of declining summer clarity.

Clarity is measured by the depth at which a 10-inch white disk, called a Secchi disk, remains visible when lowered beneath the water’s surface. The measurements have been taken continuously since 1968, when the Secchi disk could be seen down to 102.4 feet.

“Clarity in Lake Tahoe largely reflected what we saw in the weather in 2013,” said Geoffrey Schladow, director of the UC Davis Tahoe Environmental Research Center. “At the beginning of the year, clarity was lowered by large stream inflows. At the end of the year, the low inflows resulting from the drought conditions helped to improve clarity.”

While the average annual clarity in the past decade has been better than in preceding decades, it is still short of the clarity restoration target of 97.4 feet set by federal and state regulators.

A regional monitoring program for urban stormwater was initiated in the Tahoe basin in 2013. Urban stormwater runoff is believed to be the major contributor to reduced clarity at the lake. Most of that runoff occurs during the winter and spring, when rain and snowmelt carry small, inorganic particles from the land into the lake. The new program will allow researchers and agencies to better understand the annual variations in lake clarity, and to assess the performance of restoration strategies and practices.

“The inauguration of this program represents a major achievement for the Tahoe basin,” said Schladow.

The Tahoe Regional Planning Agency leads the collaborative effort to reduce urban runoff and manages the Lake Tahoe Environmental Improvement Program to repair past damage to the ecosystem. Among the hundreds of measurements the agency tracks, clarity is a key indicator of whether programs are working.

“Through the seasonal and annual fluctuations, the long-term clarity trend is good news, and it tells us that the investments being made on roadways and properties to infiltrate stormwater are working,” said TRPA executive director Joanne Marchetta. “After years of public and private restoration projects, we have succeeded in halting the decline. We recognize that more is needed to restore the lake to its historic clarity level, and science is showing that it can be done. Together, we can save one of the cleanest, purest lakes in the world.”

Marchetta also said that the effects of climate change on the watershed continue to be a critical issue for her agency and science partners to understand.

More information about environmental factors affecting Lake Tahoe will be included in the 2014 State of the Lake Report, expected this summer.