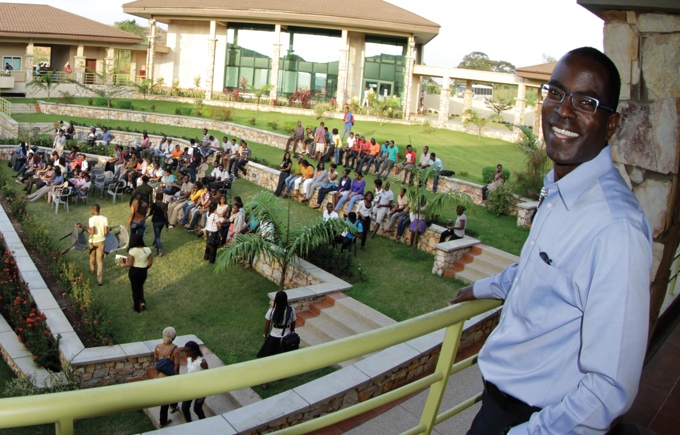 I held my breath and thought, ‘Oh dear.”

Patrick Awuah, MBA 99, is recalling a moment a decade ago when his dream of establishing Africa’s first private secular liberal arts college — Ashesi University — was being dashed.

After months of seeking a hearing before Ghana’s college accreditation committee, he finally was presenting his case, and the chair was not impressed. In a country where large public universities and an emphasis on rote learning prevail, the authorities thought Awuah’s plan to build an Ivy League-type school was about as realistic as opening a Disneyland in the Sahara. It didn’t help that Awuah, 35 at the time, looked even younger.

And then, without skipping a beat, Awuah recalls, he laid out the vision he had been developing over the previous three years. He presented the financial plan, detailed the money he had raised, and warned that he could not afford to burn through any more cash waiting for approval. He pointed out where the campus would be built and explained the bigger picture: How change could only come to Africa if it had a new generation of entrepreneurial, ethical leaders—and that’s just what Ashesi would produce. He discussed how computer science and business majors need to study philosophy, why small classes are better suited to teach technical skills, and how the new university would require community service.

The commission chair sat back, digesting what he heard: It was a bold, hardheaded proposal free of any fanfare; the I’s were all dotted and the T’s all crossed. It was vintage Patrick Awuah. “We’ll let you try this experiment,” the chair announced.

Read the complete article at Berkeley-Haas, the magazine for UC Berkeley's Haas School of Business.