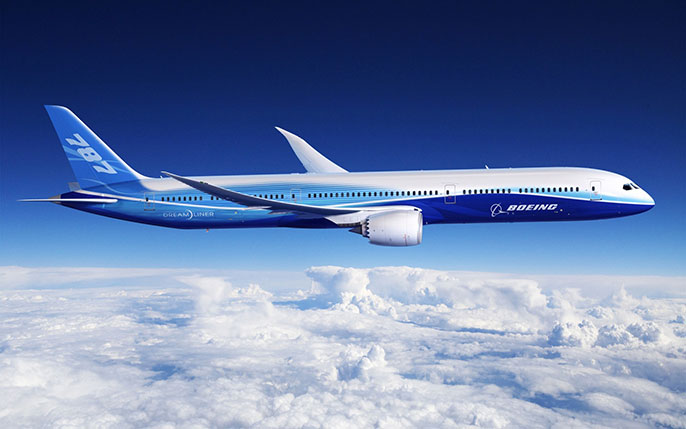 Air travel accounts for about 2 percent of the annual greenhouse gas emissions from human activity. A new catalytic process for biofuels could significantly reduce this figure.

While biofuels have proven to be an effective, renewable, low-carbon alternative to gasoline and diesel, jet fuels pose unique challenges. These challenges have now been met with a new technique developed by researchers at the Energy Biosciences Institute, a partnership led by the University of California, Berkeley, that includes Lawrence Berkeley National Laboratory and the University of Illinois at Urbana-Champaign, and the BP energy company.

“We’ve combined chemical catalysis with life-cycle greenhouse gas modeling to create a new process for producing bio-based aviation fuel as well as automotive lubricant base oils,” says Alexis Bell, a chemical engineer with joint appointments at Berkeley Lab and UC Berkeley. “The recyclable catalysts we developed are capable of converting sugarcane biomass into a new class of aviation fuel and lubricants with superior cold-flow properties, density and viscosity that could achieve net life-cycle greenhouse gas savings of up to 80 percent.”

Bell is one of three corresponding authors of a paper describing this research in the Proceedings of the National Academy of Sciences. The paper is titled “Novel pathways for fuels and lubricants from biomass optimized using life-cycle greenhouse gas assessment.” Corinne Scown, a research scientist with Berkeley Lab’s Energy Analysis and Environmental Impacts Division, and Dean Toste, a chemist with joint appointments at Berkeley Lab and UC Berkeley, are the other two corresponding authors. Additional authors are are Madhesan Balakrishnan, Eric Sacia, Sanil Sreekumar, Gorkem Gunbas and Amit Gokhale.

The concentrations of carbon and other greenhouse gases in Earth’s atmosphere are now at their highest levels in the past 3 million years, primarily as a result of the burning of petroleum and other fossil fuels. Biofuels synthesized from the sugars in plant biomass help mitigate climate change. However, jet fuels have stringent requirements that must be met.

“Jet fuels must be oxygen-free, have the right boiling point distribution and lubricity, and a very low pour point, meaning the fuel can’t become gelatinous in the cold temperatures of the stratosphere,” Bell says. “Biofuel solutions, such as farnesane, mixed directly with petroleum jet fuel have been tested, but offer only modest greenhouse gas reduction benefits. Ours is the first process to generate true drop-in aviation biofuels.”

Scown cites the Intergovernmental Panel on Climate Change (IPCC) on the importance of drop-in aviation biofuels.

“In a 2014 report, the IPCC pointed out that drop-in biofuels are the only viable alternative to conventional jet fuels,” she says. “If we want to reduce our dependence on petroleum, air travel is going to require renewable liquid fuels because batteries and fuel cells simply aren’t practical.”

The process developed at EBI can be used to selectively upgrade alkyl methyl ketones derived from sugarcane biomass into trimer condensates with better than 95-percent yields. These condensates are then hydro-deoxygenated into a new class of cycloalkane compounds that contain a cyclohexane ring and a quaternary carbon atom. These cycloalkane compounds can be tailored for the production of either jet fuel, or automotive lubricant base oils. Lubricant base oils can produce even more greenhouse gas emissions on a per-mass basis than petroleum-derived fuels if even a fraction of the lubricant is repurposed as fuel. The ability of the EBI process to yield jet fuel or lubricants should be a significant advantage for biorefineries.

“Sugarcane biorefineries today produce ethanol, sugar and electricity,” says PNAS paper co-author Gokhale, a chemical engineer, who is managing the research project from BP’s side. “Expanding the product slate to include aviation fuels and lubricant base oils could allow for operators to manage their market risks better, which is exactly how petrochemical refinery complexes operate today. Rather than optimize for one product, they try to optimize the overall product slate.”

Adds Scown, “Another important advantage offered by our process is that it enables refineries to convert a portion of the bagasse, the fibrous residue that remains after juice is extracted from sugarcane stalk, into fuels and other products. The rest of the waste biomass can be combusted to produce process heat and electricity to operate the refinery.”

This new EBI process for making jet fuel and lubricants could also be used to make diesel and additives for gasoline, as Gokhale explains.

“With some minimal modifications to both the catalysts and the reaction schemes we can produce drop-in diesel as well,” he says. “We’re planning further studies on this.”

Although the goal of this study was to develop a strategy for the flexible production of jet fuels and lubricant base oils in a Brazilian sugarcane refinery, the strategy behind the process could also be applied to biomass from other non-food plants and agricultural waste that are fermented by genetically engineered microbes.

“Although there are some additional technical challenges associated with using sugars derived entirely from biomass feedstocks like Miscanthus and switchgrass, there is no fundamental reason why we could not produce similar outputs, albeit in different proportions,” Scown says. “We expect that further research will make this option increasingly attractive.”

In their PNAS paper the authors acknowledge that the commercial implementation of their proposed process would include financial implications that extend beyond greenhouse gas emission reductions but hold that there still important incentives to encourage investments.

“We’ve shown in this study that biorefineries can use inexpensive catalysts to produce a suite of hydrocarbon fuels and lubricants,” Scown says. “By strategically piecing together biological and thermochemical processes, biorefineries can also operate without any fossil-derived inputs.”