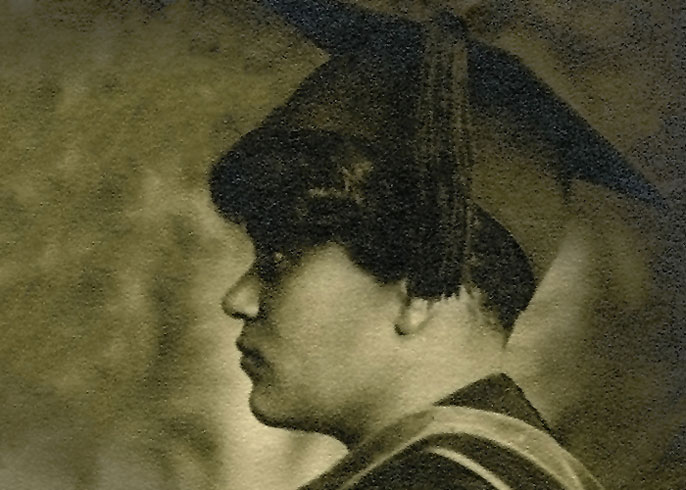 Graduation Portrait of Annie Coker — who went by Virginia Stephens at the time taken in 1929 — when she graduated from the UC Berkeley law school.

If you were to look at a group photo of the UC Berkeley School of Law’s Class of 2022, which arrived on campus last fall, a majority of the students are women, and over half are students of color. But it wasn’t always that way. In 1929, Annie Virginia Stephens Coker was one of just two women in her class and the first Black woman to graduate from Berkeley Law.

Though Coker, who died in 1986, is not well known, for a host of Berkeley Law students and alumni she was California’s first Black female lawyer and a legal icon upon whose shoulders they stand.

“When you think about the barriers she had to overcome to achieve such feats during a time of blatant discrimination, it’s unimaginable,” second-year Berkeley Law student Linda Blair said. “I just think it speaks to the ability to achieve in a community like Berkeley. It makes me really proud. I wouldn’t be here if it wasn’t for her.”

When the law school began admitting women in 1894, female students felt immense pressure to outperform their male counterparts in order to be treated as equals. Women were first admitted to the campus 150 years ago, and to commemorate that anniversary, and those students, this year UC Berkeley has been celebrating influential women who have studied, researched or worked here.

Coker, who also got her undergraduate degree at UC Berkeley, was one of those trailblazers who deserves recognition for the barriers she broke as a woman of color practicing law at a time when the courts were dominated by white men, said Berkeley Law Dean Erwin Chemerinsky.

“She had a long and distinguished career,” he said. “I wish we knew more about her, because all who followed her benefited from her.”

More than 30 years ago, Brenda Harbin-Forte, an Alameda County Superior Court judge at the time, attended a gathering held by the Historical Society of the U.S. District Court for the Northern District of California, honoring California’s first female lawyers.

Today, Harbin-Forte, a Berkeley Law alumna, recalled that no Black women were recognized at the event. The slight inspired her to conduct research on the first Black woman to practice law in the state.

Harbin-Forte found that Coker was not widely known in the legal world, so she decided to piece together Coker’s history by getting in touch with Coker’s colleagues and friends. She said she found that Coker “was a woman after my own heart,” as those who knew her well said she was classy and bright, yet reserved, and also a “spoiled brat who was loved by all.” Coker was also refreshingly relatable, said Harbin-Forte, as Coker once told a friend, “If God ever told me, ‘Virginia, you have one more day to live,’ I’d like to do it shopping.”

“People just don’t seem to care what Black women think about our own struggles,” she said. “So, it was important to me to share this information, so that other Black women would have historical role models in law.”

An Oakland native, Coker (then Annie Stephens) was born April 7, 1903, the only child of William and Pauline Stephens. Though Coker hated to cook, her family ran Stephens’ Restaurant, an Oakland establishment off 14th Street near Lake Merritt and one of the first Black-owned businesses in the area.

William Stephens emphasized the importance of education in his household and employed Black students at the restaurant to help them earn money for school.

As a child, Coker attended Oakland public schools, but the family moved during her teenage years to Pacific Grove, where she would graduate from high school. She received high marks in all of her classes, but specifically excelled in arithmetic, geography and agriculture, according to Oakland Public Library archives.

Known as Virginia to her classmates, Coker was described as being very conscientious and a hard worker who also loved music and enjoyed traveling.

Coker was also active in Greek life as a Berkeley undergraduate and, along with Ida Louise Jackson, was a charter member of Alpha Kappa Alpha, Berkeley’s first Black sorority. Jackson, like Coker, was a pioneer in her own right and would become the first Black woman certified to teach in California.

After graduating from Berkeley in 1924 with a bachelor’s degree in legal studies, Coker was urged by her father to pursue a degree at the university’s law school.

William Stephens himself had a history of challenging legal standings, including in a letter he wrote in August 1931 that petitioned city officials about the unfair use of housing discrimination in his attempt to purchase a residence in San Francisco’s Excelsior neighborhood.

Inspired by her father, Coker enrolled in Berkeley’s law school, where she was one of two women in a class of 47 students. She passed the California Bar Examination in 1929, the same year she graduated. According to Harbin-Forte, Coker had “fulfilled a lifelong dream of becoming a lawyer.”

Soon thereafter, she married fellow attorney George Coker. The couple were committed to helping bring racial diversity to the courts, and they tutored Black students for the bar exam. After moving to Alexandria, Virginia, they started their own private practice, providing law services for nearly 10 years before moving back to California and settling in Sacramento.

In May 1939, Annie Coker received an appointment as an attorney in the State Office of the Legislative Council in Sacramento. She worked there for more than 25 years and served the council as deputy of the indexing section, prior to retiring in 1966.

At the age of 83, Coker died in Sacramento on Feb. 11, 1986. Harbin-Forte said that Coker’s lifelong accomplishments were unheard of during a time when segregation and Jim Crow laws were still prominent, and that knowing Coker’s history continues to inspire her.

“When I visit the Berkeley campus now, I feel a connection to her,” said Harbin-Forte. “I thank her for blazing a trail that so many other young Black law students could walk through.”

Hewlett, a 1979 Berkeley Law graduate, said that, throughout the years, the law school has created a network of Black female lawyers that includes groups such as Black Women Lawyers of Northern California. Hewlett was a founding member of the organization 40 years ago, and its first president.

“As Black women practicing law, we’ve all had our share of struggles,” said Hewlett. “Throughout the years, we’ve been able to establish a community for current and future Black women attorneys to connect and relate to one another. Coker did not have these social circles in her day, but she helped pave the way for them to exist for us.”

Third-year Berkeley Law student Jessica Williams is co-chair of the Womxn of Color Collective, a student group at the law school that promotes diversity in the legal field. The group has plans to honor Coker, and other notable women of color who graduated from Berkeley Law, by offering fellowships in their names to graduating seniors and students pursuing fields in law that serve the public interest.

Williams said she hopes that Berkeley Law will also recognize Coker by placing an image of her on the walls of the law school.

“Knowing her story is really wonderful and inspiring for us,” Williams said. “But as a student, I had to go out of my way to look for this history. There are lots of ways that we can acknowledge and celebrate the contributions of women and people of color in law, and I think that the school can take more steps to address that.”