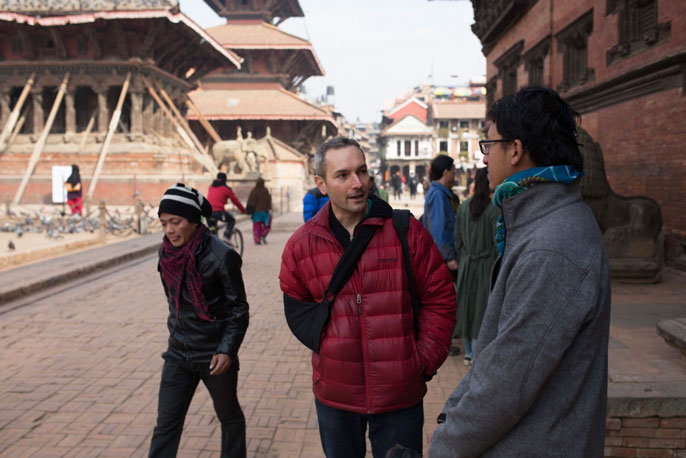 On the eve of a great battle, during a war that even the gods must attend, a warrior prince named Arjuna faces the crisis of his life. In this massive civil conflict, even friends and family are his opponents, causing him to reconsider his role in the scheme of things.

“It’s like a frozen moment in time on this battlefield,” theater scholar Greg Mitchell said of the scene that opens the beloved Hindu scripture Bhagavad Gita. “There’s a conversation between Arjuna, a mortal, and his charioteer — the god Krishna — who in this context, is a manifestation of everything.”

It’s also the central theme of the first-ever operatic work to debut in Nepal, one that Mitchell, an assistant professor at UC Santa Barbara’s Department of Theater and Dance, is helping to flesh out with his own artistic and design skills. Called “Arjuna’s Dilemma,” and written by American composer Douglas J. Cuomo, the opera combines elements of Eastern and Western music and theater, and is a collaboration between Nepali, American and other international artists and theater professionals.

“It is very confusing, and yet very exciting for me as a Western artist,” said Mitchell. As a scenographer, he is responsible setting the stage on which the story unfolds — this moment of internal upheaval amid the external chaos. It’s no small feat, especially in a place like Nepal where Hindu roots run deep, and it demands a great amount of respect and care from the western contingent of the company, said Mitchell.

Add to that the opportunity — and also the challenge — of staging the opera in a palace complex with ancient Hindu and Buddhist roots: Mul Chowk, the largest courtyard of the Patan Royal Palace complex in Kathmandu. Red brick buildings and exquisite carvings still adorn this roughly four-century-old complex, a reminder of the strong arts and artisanal tradition in the area. The site itself has been sacred for several thousands of years and is a UNESCO World Heritage Site.

“It’s awe inspiring, and it’s beautiful; I’m incredibly grateful for the opportunity,” said Mitchell, who was recently on site and will return in the summer to complete the project for the opera’s September premiere.

To prepare for this project, Mitchell has read the Gita — as the text is commonly known — several times. Although he’s in charge of every visual and auditory aspect of the production, from costumes to lighting to sound, he relies heavily on his mostly Nepali art and design team to bring their versions of the physical manifestation of the story into the place.

The production itself is a result of chaos, particularly the chaos wreaked upon Nepal, and especially Kathmandu, during the earthquakes of early 2015. Thousands of people lost their lives and their homes during those temblors, which leveled buildings, triggered landslides and caused avalanches on Mount Everest.

At that time, said Mitchell, the production was to be a hybrid of the Shakespearean and Verdi versions of Macbeth, but when the earthquakes hit, all production stopped and the collaborators dwelt in uncertainty as the country tried to put itself back together.

But in theater, as in life, as in the story upon which this opera is based, the show must go on, and it was the Nepali contingent that pushed the collaboration forward despite the difficulties and insecurities that resulted from the disasters. This time, however, it would not be the violence and blood of Macbeth, but the more philosophical and artistic blend of Arjuna’s Dilemma.

“It’s also a story, in some ways, about healing, the eternity of the soul and of many deep philosophical issues,” said Mitchell, adding that he was “very inspired” by the work he’s seen from the artists and performances in Nepal.

That inspiration will come in handy as he and his team continue to navigate the tricky logistics of sacred and historical places as well as the rigorous permissions process involved in creating a production in an ancient historical site. While in Nepal, Mitchell blogged to his students on everything from deep cultural aspects to the more mundane buying of cloth and other supplies, something he hopes will spur them into thinking with broader creative horizons.

“I hope to blow their mind that this sort of thing exists,” he said. “I hope this makes them think that this kind of work is possible as a career, and that there is far more than what is immediately around them.”