Making an ‘IMPACT’ on childhood obesity 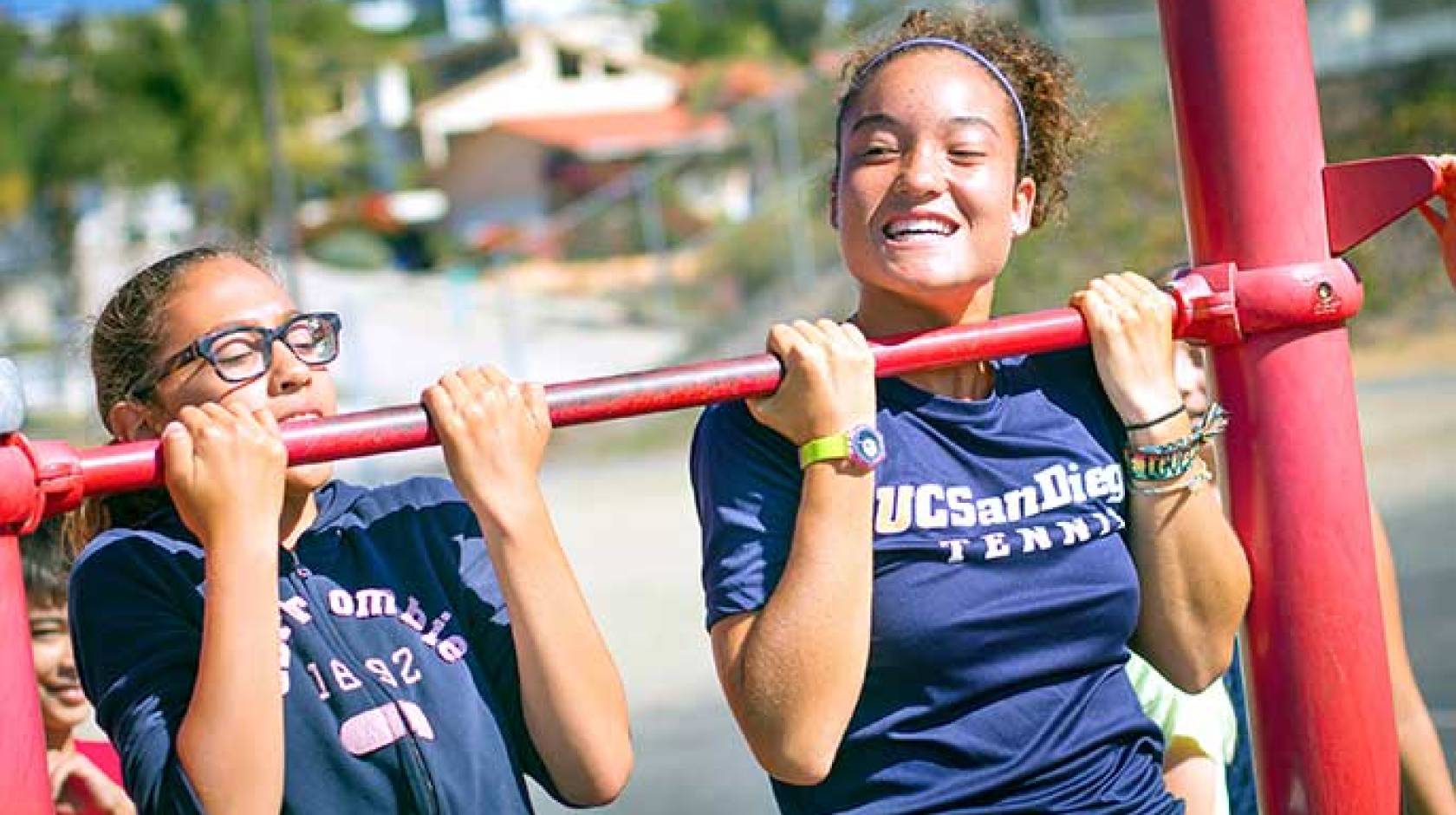 “I like to get out here and sweat,” said Dalton, an elementary student at Toler Elementary, as he began a series of stretches and exercises led by UC San Diego student-athletes volunteering their time at his elementary school in Clairemont.

Dalton and his classmates are benefiting from a program called IMPACT (Increasing Movement and Physical Activity in Class Time), which is designed to keep local elementary students moving despite the lack of recess and physical education classes in some schools, particularly in underserved areas of San Diego.

IMPACT was established by the San Diego Unified School District in partnership with UC San Diego Athletics and the UC San Diego School of Medicine Center for Community Health to promote healthy activity and battle the growing national epidemic of obesity among children. According to the Centers for Disease Control and Prevention, in 2012, more than one third of children and adolescents in the U.S. were overweight or obese.

Each week as part of IMPACT, UC San Diego student-athletes set up a series of circuits, including jump ropes, hula-hoops, monkey bars, stretching and more. The student-athletes assist and cheer on the students as they rotate through the stations for approximately 20 minutes. Each of the activities are designed to be fun for the students, while getting them moving and raising their heart rates—a key intention of the program.

Many of the UC San Diego student-athletes who participate are members of the Triton Athletes’ Council (TAC), an organization of students from the university’s 23 intercollegiate teams who initiate campus and community service efforts. The IMPACT program was an ideal match for Triton Athletes’ because of the group’s focus on making a positive impact on the community.

Scott Acton, a member of the Triton Athletes’ Council who is also on the track and field and cross country teams, has helped coordinate UC San Diego Athletics’ role in the program this year. “It is great to see the elementary students get out and be active,” said Acton, a structural engineering major. “Word is spreading among student-athletes about what a great program this is, so more and more from UC San Diego are getting involved.”

“Having educated and physically fit athletes attend these sessions shows the children that with hard work and dedication, they can reach any goal they wish to attain in athletics, but the first step is being physically active,” said Lynn Barnes-Wallace, physical education resource teacher at San Diego Unified School District and creator of IMPACT. “The students from UC San Diego really get involved with the program and motivate the kids even more.”

IMPACT began at Edison Elementary in City Heights last spring. The program was such a success — as evidenced by the smiles and squeals of delight from the students — that it was expanded to Toler and will likely be implemented at other elementary schools in the future.

According to Peggy Lewis, principal of Toler Elementary, the program is a hit with her young students. “The kids love it,” said Lewis. “They need activity during the day. We have already seen improved student focus and concentration as a result of the program.”