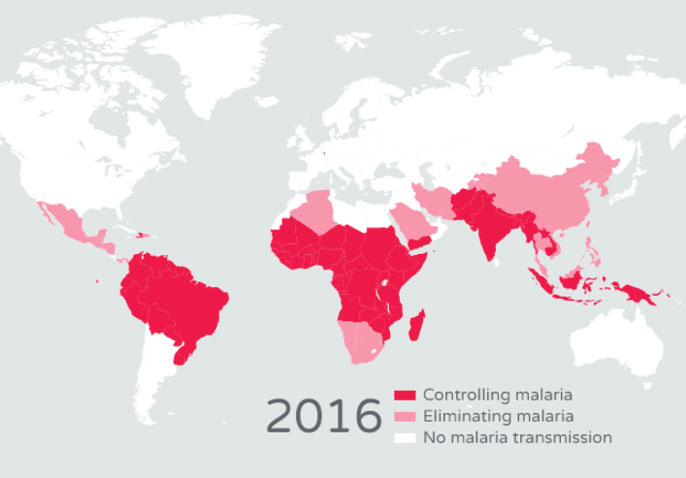 View the "Shrinking the Malaria Map," a website tracking global progress in eradicating malaria by 2040 by visiting http://www.shrinkingthemalariamap.org

Global malaria eradication is possible within a generation, but only with renewed focus, new tools and sufficient financial support, according to a paper published in The Lancet by the Global Health Group’s (GHG) Malaria Elimination Initiative (MEI) at UC San Francisco.

The paper examines the progress that 35 countries with low malaria transmission are making to eliminate the disease entirely from within their borders. Countrywide elimination, a precursor of global eradication, is now seen as an attainable goal for most national malaria programs, and countries are working collaboratively to end malaria transmission in their regions.

“Eradicating malaria will require nothing short of unwavering support at all levels – national, regional, and global. With intense focus, new tools, and adequate financial resources, a malaria-free world is possible within a generation,” said Sir Richard Feachem, KBE, FREng, DSc(Med), Ph.D., director of the UCSF Global Health Groupand the paper’s senior author. “The malaria map is shrinking rapidly. More than 20 countries are on track to eliminate by 2020 and over 60 can do it by 2030. We cannot let up now. To achieve the ambitious but attainable goal of malaria eradication by 2040, the targets we set must be as big and bold as our aspirations.”

As World Malaria Day approaches on April 25, Feachem said it is important to remember that malaria was once a leading cause of death and illness in nearly every country in the world. Since 2000, great progress has been made around the globe, driven largely by the progress made by the eliminating countries. In these malaria-eliminating countires, malaria cases declined 91 percent, from 1.6 million cases to 150,000, while malaria deaths dropped 81 percent between 2000 and 2014. The list of eliminating countries continues to grow as nations and regions adopt ambitious goals to eliminate the disease, rather than only controlling it and allowing transmission to continue.

More than half of the world’s countries have already eliminated malaria. Between 2007 and 2013, four countries (Armenia, Morocco, Turkmenistan, and United Arab Emirates) were certified as malaria-free by the World Health Organization (WHO), and eight more have prevented the reintroduction of malaria for at least three years (Argentina, Egypt, Georgia, Iraq, Kyrgyzstan, Oman, Syria, and Uzbekistan). Five others have interrupted local transmission (Azerbaijan, Costa Rica, Paraguay, Sri Lanka, and Turkey). As an example of recent success, Sri Lanka reduced its local malaria cases from over 200,000 in 2000 to zero by 2013. Sri Lanka will be applying for WHO malaria-free country certification later this year.

"The greatest threat to malaria elimination, according to the paper, would be a reduction of the political and financial commitment required to eliminate malaria and prevent reintroduction."

However, this progress cannot be taken for granted. The greatest threat to malaria elimination, according to the paper, would be a reduction of the political and financial commitment required to eliminate malaria and prevent reintroduction. In the malaria-eliminating countries, nearly 80 percent of elimination funding comes from national governments, but this financing is at risk of being diverted to other disease priorities perceived as being more urgent. External aid has been on the decline for eliminating countries, with multi- and bilateral donors tending to support low-income, high-burden malaria countries in an effort to reduce malaria cases rather than end transmission. Eliminating countries are expected to face an overall 31 percent decline in national funding from the Global Fund, the largest financer of malaria. Further, 15 of the malaria-eliminating countries are now upper-middle-income and will be expected to close the financing gap with domestic funding. Other challenges to malaria elimination are technical and include malaria crossing borders, growing drug and insecticide resistance, increase in zoonotic malaria, and limited treatment options for the malaria parasite, Plasmodium vivax.

The path to malaria eradication

The paper describes the critical components to put countries on the path to malaria eradication. These include strong and sustained funding commitments, a global endorsement of the eradication agenda, and robust regional collaborations on elimination. Annual investments will need to increase to at least $6.4 billion by 2020 to continue progress in all malaria-endemic countries, according to the Roll Back Malaria Partnership’s Action and Investment to defeat Malaria 2016-2030 (AIM) – for a malaria-free world. A global endorsement of an eradication goal is needed to help generate the enthusiasm and momentum necessary for countries to eliminate the disease from their borders. Resilient regional collaborations will be required to achieve the ambitious regional goals, including elimination in Mesoamerica-Hispaniola (2020), Asia Pacific (2030), and southern Africa (2030).

The words elimination and eradication are often confused and used incorrectly. Elimination refers to the ending of malaria transmission within a country or defined geographical area. Thus, the United States eliminated malaria in 1952, Turkmenistan eliminated malaria in 2010, and China and Swaziland (along with more than 30 other countries) are working on eliminating malaria now. The word eradication refers to the complete removal of the malaria parasite from the human species. In other words, no more malaria is transmitted anywhere in humans. Elimination, country by country, is a critical step down the road towards eventual global malaria eradication.

The UCSF Global Health Group is an ‘action tank’ dedicated to translating new approaches into large-scale action to improve the lives of millions of people. Launched in 2007, the UCSF Global Health Group’s Malaria Elimination Initiative (MEI) believes that global eradication of malaria is possible within a generation. Working with forward-thinking partners at global, regional, and national levels, the MEI accelerates progress by conducting operational research to improve surveillance and response, determining the costs of elimination, and strengthening political and financial commitment to shrink the malaria map. For more information on malaria elimination, please visit: http://www.shrinkingthemalariamap.org or http://globalhealthsciences.ucsf.edu/global-health-group/malaria-elimination-initiative.