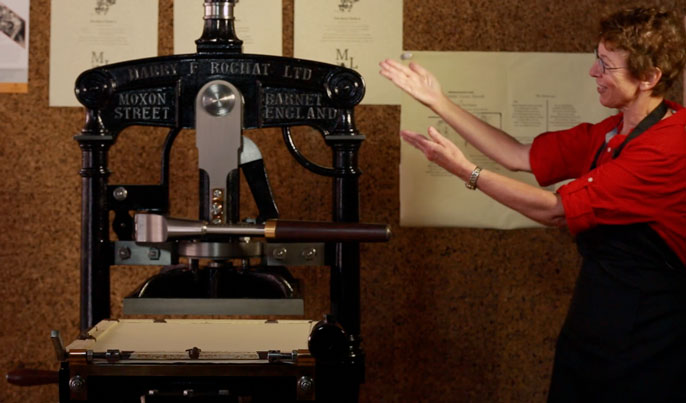 For someone who spent weeks tightly sealed in a wooden packing crate for her journey from London to UC Santa Barbara, Mad Madge looked pretty good. Sure, she needed a little TLC and a few parts fitted in place, but there she sat, 1,200 pounds of iron and steel beauty.

“People thought it was insane that we were buying an iron press from the 19th century, a traditional pull press, in England and shipping it by freighter all the way to the United States,” said Patricia Fumerton, the professor of English at UC Santa Barbara who conceived of and spearheaded the purchase of the press.

But Madge, who was named for 17th-century writer Margaret Cavendish, is no curious relic. She’s a brand-new, faithful replica of an early 19th-century Albion press, a durable workhorse in the days of moveable type and Charles Dickens.

She comes to UC Santa Barbara as the centerpiece of the campus’s new Maker Lab, an innovative experiment in the history and future of printing. In addition to Madge, the lab includes a digital punctum press and a 3-D printer that will, among other things, make type for its iron ancestor.

The Maker Lab is part of a larger initiative, the Digital Arts and Humanities Commons. The brainchild of John Majewski, the Michael Douglas Dean of Humanities and Fine Arts at UC Santa Barbara, the Commons is an open space in the university’s old Arts Library where teams from disparate disciplines can collaborate on projects.

Majewski, in fact, made it possible for Fumerton to buy Madge, who came with a price tag of a little more than $12,000. “This couldn’t have happened if the dean didn’t think that getting Mad Madge was not mad,” she said. “He saw the vision. He saw the excitement. He felt the excitement.”

Indeed he did. “I am so excited about the Maker Lab,” Majewski said. “In a single room, students will be able to experience the evolution of printing from the 19th century to the 21st century. Such an environment creates amazing opportunities for innovative teaching and research.”

Madge will present her first teachable moments in the fall quarter, in “The History and Making of Print,” a small class of graduate and undergraduate students. Fumerton and Harry Reese, a professor of art at UC Santa Barbara and founder of the Book Arts program in the campus’s College of Creative Studies, will lead the course.

Experience is at the core of the Maker Lab, Fumerton noted. Printing with Madge is a whole-body activity: setting the type, securing it in a steel frame, inking, pulling the lever, cleaning the type and putting it away. The person printing becomes a maker, not just a user. Working with Madge will be the closest thing one might get to printing with Johannes Gutenberg in the 15th century.

“Can you really experience what Gutenberg or the Renaissance experienced? Of course you can’t,” Fumerton said. “You can’t recreate that historical moment, but as one critic said, you can create an analog, a ‘like’ feeling, something like that experiential moment. It’s not going to be identical, but it’s going to give printers an approximation of what it means to get your hands dirty; to physically move your body; the stance involved in pulling the press; the delight in touching the paper, which has texture to it; and smelling the ink.

“So we’re part of this new maker movement that’s really sweeping not just English literary studies,” she continued, “but all the humanities.”

Built by Harry F. Rochat Ltd, a family business in London, Madge is an imposing specimen. Standing a little over 6 feet tall and nearly 3 feet across, she’s a Victorian heavyweight built of modern materials. That’s partly what appealed to Fumerton, who was looking for an old press to use in the Maker Lab. Used presses weren’t exactly abundant and some, like a 19th-century Washington press she investigated, would eventually need parts that were no longer being manufactured.

But the Rochat family made obsolescence a non-issue. “They make the parts,” Fumerton pointed out. “If something goes wrong they’ll make the part for you, and they’re even willing to fly out. They’re eager to make sure the product that they made by hand works right.”

Fumerton got a chance to see an Albion press when she visited the Rochat factory with Kristen McCants, a UC Santa Barbara graduate student, last summer. She was quickly sold.

“The experience alone of trying out the press, seeing that it worked beautifully, was persuasive,” she said. “But also seeing the contagion of the Rochats’ pride in their work moved me toward purchasing that item. That experiential moment of being with the makers was very, very exciting. I wanted to personally try out the press. I felt that was very important.”

The Albion presses were built in London by Richard Cope starting around 1820. They quickly became popular because of their lighter weight, ease of use and durability. One of their competitors was the Columbian press, an American invention.

Their rivalry, however, was tinged with nationalism. As it turns out, Albion was the original name for England when it was allegedly inhabited by giants. The first 13 colonies across the pond, on the other hand, were first known as Columbia. One’s choice of printers had jingoistic overtones.

“Basically, it was cultural war,” Fumerton said. “ ‘We’ve got the Columbian, We’ve got the Albion.’ ” Ulitmately, the Albion won, and the makers of the Columbian press moved their operation from America to England — only to be replaced in the U.S. by the popular Washington press.

A link to the past

Fumerton, who’s put about $7,000 of her own money into acquiring Madge and equipping the Maker Lab, is no stranger to centuries-old printing. She’s the director of UC Santa Barbara’s English Broadside Ballad Archive, a digitized collection of roughly 8,000 copies of what were the mass media in the 16th and 17th centuries in England. Printed on one side of large sheets of paper — hence “broad-side” — in heavy gothic type and illustrated with woodcuts, they were sung to a popular tune that was printed on the sheet. They covered news, politics, scandal, sex, obituaries and most everything under the sun — and they would’ve been printed on presses like Madge.

“The broadside ballads for me have always been an experiential moment,” Fumerton said. “What I try to recreate in the archives is a vision of the decisions of how the sheet was collected, gathered, cut apart and pasted down, and, of course, sung.”

And now Fumerton, who credits McCants as a major force in acquiring Madge, gets to introduce a new generation to the messy joys of the maker movement.

“I’ve got so many people excited about this because it’s just shocking how much we all really do want to go back to kindergarten and build things with our hands,” she said.