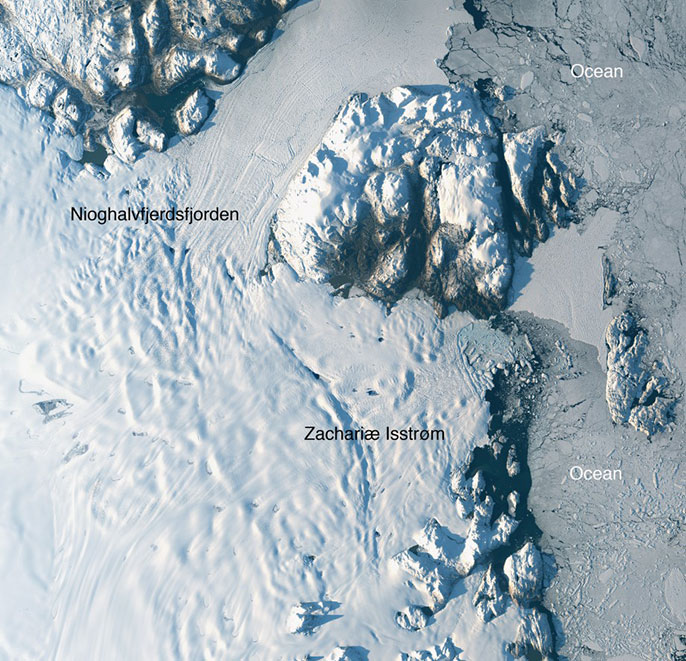 To see video, photos and a narrative of the August 2014 expedition, visit http://news.uci.edu/greenland.

A glacier in northeast Greenland that holds enough water to raise global sea levels by more than 18 inches has come unmoored from a stabilizing sill and is crumbling into the North Atlantic Ocean. Losing mass at a rate of 5 billion tons per year, glacier Zachariae Isstrom entered a phase of accelerated retreat in 2012, according to findings published in the current issue of Science.

“North Greenland glaciers are changing rapidly,” said lead author Jeremie Mouginot, an associate project scientist in the Department of Earth System Science at the University of California, Irvine. “The shape and dynamics of Zachariae Isstrom have changed dramatically over the last few years. The glacier is now breaking up and calving high volumes of icebergs into the ocean, which will result in rising sea levels for decades to come.”

The highly sensitive radar sounder, gravimeter and laser profiling systems, coupled with radar and optical images from space, monitor and record changes in the shape, size and position of glacial ice over long time periods, providing precise data on the state of Earth’s polar regions.

The scientists determined that the bottom of Zachariae Isstrom is being rapidly eroded by warmer ocean water mixed with growing amounts of meltwater from the ice sheet surface. “Ocean warming has likely played a major role in triggering [the glacier’s] retreat,” Mouginot said, “but we need more oceanographic observations in this critical sector of Greenland to determine its future.”

“Zachariae Isstrom is being hit from above and below,” said senior author Eric Rignot, Chancellor’s Professor of Earth system science at UC Irvine. “The top of the glacier is melting away as a result of decades of steadily increasing air temperatures, while its underside is compromised by currents carrying warmer ocean water, and the glacier is now breaking away into bits and pieces and retreating into deeper ground.”

Zachariae Isstrom neighbors another large glacier, this one named Nioghalvfjerdsfjorden, that also is melting rapidly but is receding at a slower rate because it’s protected by an inland hill. The two glaciers make up 12 percent of the Greenland ice sheet and would boost global sea levels by more than 39 inches if they fully collapsed.

“Not long ago, we wondered about the effect on sea levels if Earth’s major glaciers were to start retreating,” Rignot noted. “We no longer need to wonder; for a couple of decades now, we’ve been able to directly observe the results of climate warming on polar glaciers. The changes are staggering and are now affecting the four corners of Greenland.”

Ongoing research into the health of ice sheets and glaciers in Greenland and Antarctica is supported by funding from NASA’s Cryospheric Sciences Program.