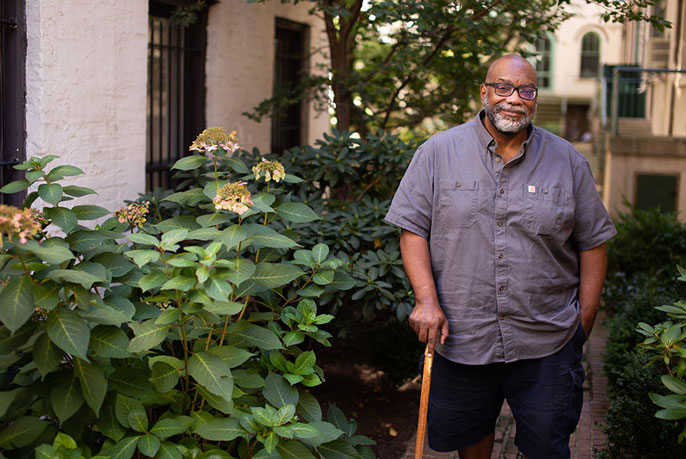 Fred Moten, a UC Berkeley alum and former UC Riverside professor, was awarded a $625,000 MacArthur grant in recognition of his cultural theory and poetry this year.

Four UC alums and one faculty member will each receive a $625,000 unrestricted prize, or “genius grant,” as 2020 MacArthur fellows.

The awardees include an anthropologist who studies how human rights are being transformed by the digital economy, a biologist working to improve contraception, a historian who traces the historic roots of anti-immigrant racism, a sociologist who looks at attitudes toward poverty, and a poet whose work elevates the Black experience.

“In the midst of civil unrest, a global pandemic, natural disasters, and conflagrations, this group of 21 exceptionally creative individuals offers a moment for celebration,” wrote Celia Conrad, managing director of the MacArthur Fellows in the announcement of its new class. “They are asking critical questions, developing innovative technologies and public policies, enriching our understanding of the human condition, and producing works of art that provoke and inspire us.”

The awards, presented by the John D. and Catherine T. MacArthur Foundation, recognize outstanding talent, creativity and the potential for future greatness, and are one of the few grant programs in which recipients are free to use the award money however they wish. The MacArthur Foundation’s stated goal is to give these extraordinary people the independence to pursue their passions.

Anthropologist and media scholar Mary L. Gray was recognized for her work investigating the ways in which labor, identity, and human rights are being transformed by the digital economy.

Gray received a double bachelor’s from UC Davis and a Ph.D. from UC San Diego. She is currently a senior principal researcher at Microsoft Research as well as a Berkman Klein Center for Internet and Society Faculty Associate at Harvard University, and an Indiana University faculty member.

Gray’s most recent book, “Ghost Work: How to Stop Silicon Valley from Building a New Global Underclass,” co-authored with Siddharth Suri, brings to the forefront the human labor behind seemingly automated systems throughout history, including present-day online platforms where workers across the world are hired to perform low-paid tasks.

An earlier book, “Out in the Country: Youth, Media, and Queer Visibility in Rural America,” countered the assumption that urban centers present the only viable option for LGBTQ+ individuals to live openly. Her groundbreaking study documented how rural youth organize, support and build community online and offline.

“Technologies have become de facto public squares that connect and envelop us,” Gray said about her work.

“Technologies cannot replace our humanness. They can only amplify and stifle what and who comes to matter.”

Polina V. Lishko is a cellular and developmental biologist whose work examining the cellular processes that guide mammalian fertilization has opened new avenues for contraception and the treatment of infertility.

Lishko served as an instructor at UC San Francisco in 2011 and joined the faculty of UC Berkeley in 2012, where she is currently an associate professor in the department of molecular and cell biology.

Lishko’s work “has already led to the development of promising new non-hormonal contraceptives for women and could lead to male or unisex contraceptives,” UC Berkeley wrote in a story about her MacArthur grant. Lishko plans to use the $625,000 grant to continue her work on reproductive physiology, including how sperm navigate the reproductive tract and the effects of aging on the female reproductive system.

There is an urgent need for contraceptives that prevent unwanted pregnancies without causing serious side effects, Lishko said, yet she’s received little federal funding for her work. Much of her research on contraceptives has been supported by private funds, including a recent Bakar Fellowship through UC Berkeley and the Male Contraceptive Initiative. She had begun to despair, she said, about the lack of interest in how normal human reproduction works on the cellular, molecular and genetic levels. Given the increasing reliance on in vitro fertilization and other technologies to get pregnant, and with so many women now waiting to start families until their late 30s, such basic research is more important than ever.

“The MacArthur fellowship is a life-changer. Psychologically, it is a huge boost.”
–Polina V. Lishko

“The MacArthur fellowship is a life-changer. Psychologically, it is a huge boost — not only for me, but for the team, as well, because it shows a recognition of the importance of the field of reproductive physiology,” Lishko said.

“It is amazing that this award exists. It was a huge surprise, but also a huge appreciation: The community basically tells you that your work is important,” she said. “That is probably one of the most gratifying things any researcher can experience.”

Natalia Molina is a historian examining how concepts of race, citizenship, and belonging have been applied to distinct immigrant groups in the United States over time. She considers the histories of Latinx and Asian immigrants in relation to one another, drawing out connections among the systems of exclusion and segregation they have faced.

In her first book, “Fit to Be Citizens? Public Health and Race in Los Angeles, 1879–1939,” Molina documented how the medical establishment used public health campaigns to contain, control and categorize immigrant groups, including Chinese, Japanese and Mexican workers, in ways that stigmatized them and limited their access to housing and medical care with lasting effects that persist to this day.

Her second book, “How Race Is Made in America: Immigration, Citizenship, and the Historical Power of Racial Scripts,” delves into a broad range of archival sources to analyze the characterization of Mexican Americans and Mexican immigrants as unsuitable for citizenship during the middle decades of the twentieth century. She also advances a theory of racial scripts, a framework she employs to explain how certain attitudes, stereotypes, and policies of exclusion have been adapted and applied to different marginalized groups across historical periods and geographies.

In addition to her scholarship, Molina addresses current events and issues such as birthright citizenship and the denial of services to immigrant families in opinion pieces in national media outlets and on social media, shedding light on recurring patterns of discrimination for academic and general audiences alike.

Molina received a bachelor’s from UCLA and previously taught at UC San Diego, where she also served as associate dean of the Division of Arts and Humanities and associate vice chancellor for Faculty Diversity and Equity. She is now a professor at the University of Southern California.

Moten received a Ph.D. from UC Berkeley and previously taught at UC Riverside. Since 2017, he has served as a professor in the Department of Performance Studies at New York University.

In his theoretical and critical writing on visual culture, poetics, music, and performance, Moten seeks to move beyond philosophical constructs that do not account for the lived Black experience. He is developing a new mode of aesthetic inquiry wherein the conditions of being Black play a central role. His work particularly focuses on sound and its importance as a medium of Black resistance and creativity.

Moten’s first book, “In the Break: The Aesthetics of the Black Radical Tradition,” offers insights that emerge from taking sound as the point of departure for interpretation. He considers, for example, the screams of Frederick Douglass’s Aunt Hester as an expression of Black resistance, suggesting we understand the trauma of slavery as something not just seen but emphatically heard as well.

Moten’s recently completed three-volume work, “consent not to be a single being,” includes essays written over the course of 15 years touching on topics across the arts and humanities — from the music of Curtis Mayfield and Billie Holiday to the critical philosophy of Immanuel Kant and Theodor Adorno — as he explores notions of performance and freedom and formations of Black identity.

Moten continues the project of his theoretical work in his poetry. In his 2014 collection, “The Feel Trio,” for instance, language hovers at the edge of sense so that sound rises to the fore and the reading of the poem approaches musical performance. Through all his work, Moten demonstrates how critical thinking can reshape social and cultural fields.

Sociologist Forrest Stuart was awarded a MacArthur grant for challenging long-held assumptions about the forces that shape urban poverty and violence and bringing to light the lived reality of those who experience it.

Stuart received a bachelor’s from UC Santa Cruz and a master’s and Ph.D. from UCLA. He is currently an associate professor in the department of sociology and director of the Stanford Ethnography Lab at Stanford University.

His multiyear, immersive investigations reveal the causes and consequences of entrenched poverty. Combining historical and theoretical analysis with extensive ethnographic fieldwork, Stuart situates communities impacted by poverty and violence within the context of broader policy decisions and cultural forces.

His first book, “Down, Out, and Under Arrest: Policing and Everyday Life in Skid Row,” presents an account of Los Angeles’s Skid Row from the perspectives of both its residents and the police over the first five years of the Safer Cities Initiative. Skid Row officers promoted this system as a way to rehabilitate residents, rather than punish them, but program services were developed without regard for the needs and wants of people on Skid Row. Stuart found that despite officers’ best intentions, their efforts at rehabilitation rested on flawed logic, attributing poverty and criminal records to individuals’ lack of character rather than to structural determinants or social factors.

Stuart’s recently published second book, “Ballad of the Bullet: Gangs, Drill Music, and the Power of Online Infamy,” focuses on the use of social media among gang-associated youth in Chicago as a way of building economic and social capital while avoiding or mitigating violent confrontation.