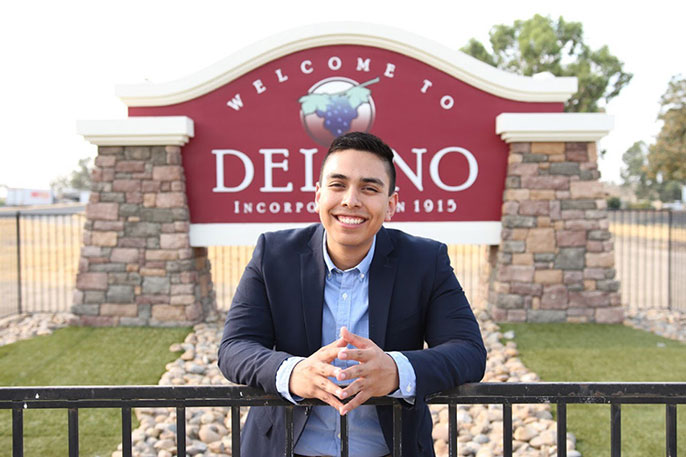 The new mayor of Delano, Bryan Osorio Trujillo, took office on Dec. 7. Osorio, who majored in political science and cognitive science, said he always intended to return to his hometown after graduation to serve in government or to work at a nonprofit.

Editor's note: This is a first-person narrative from young UC Berkeley alum Bryan Osorio Trujillo, the new mayor of Delano, who took office on Dec. 7.

My parents are Mexican immigrants who came to California as teenagers. Back in Mexico, they had lived in poverty within their home states — Dad is from Guerrero; Mom is from Oaxaca. They met working at a Taco Bell in Santa Ana and have worked in the fast-food industry for many years. I was born in Garden Grove, and we moved to Delano when I was 7. My family likes to stick close, so I have two aunts in Delano, as well.

I was a first-generation college student and graduated from UC Berkeley in 2018 with a B.A. in political science and cognitive science. During my time at UC Berkeley, I was chief of staff for ASUC Senator Anthony Carrasco, state affairs/organizing director for External Affairs Vice President Rigel Robinson, and a student senator for half a term. I also was involved in BUILD, the Latinx Pre-Law Society and Cal Club Baseball.

My first day as mayor of Delano was Monday, Dec. 7. I had turned 25 the previous weekend. I’m certainly one of the youngest mayors appointed in Delano. Our city has a council-manager form of government, where the mayor is nominated and appointed by the city council. That’s not unusual in small cities. The job is on a rotating basis, where different council members have the opportunity to be mayor, but you need the majority of the council to support your nomination.

At the beginning of 2020, when I was only a city council member, we had a Bernie Sanders office in Kern County, in Bakersfield. I was invited to shoot a video for Sanders with a progressive mayor, 27, from the city of Arvin, and a progressive city councilwoman, 22, from Kingsburg. The Sanders campaign shared it on their social media, so people saw a presidential candidate showing interest in young voices in California’s Central Valley. Some said, ‘Wow, Bryan is getting shared online by a presidential candidate!’ It was a surreal experience.

Bernie ended up garnering the most support here locally in the primary, showing that people here do want policies that support social programs and a different approach to public safety. Although Trump still won Kern County this November, in our congressional district, Biden got most of the support, and Delano still has a clear majority of people who are registered Democrats.

When I ran for city council, my picture was posted on my signs, and I’d run into people, and they’d say, ‘You’re the guy from the billboards!’ and I’d say, ‘Yes, that’s me.” This year, they sometimes say, ‘Hey, Bryan, I voted for you.’ But being accepted as a politician here was mixed. When I was running for city council, my fliers included that I went to UC Berkeley. And some people said my ideas were ‘Berkeley ideas, not Delano values,’ while others have taken the approach of ‘this son of immigrants went to Berkeley and came back with new ideas. Let’s see where it goes.’

Because UC Berkeley is known to be liberal, and I’ve firmly established myself as a liberal here, when I share my ideas or propose new approaches, sometimes people say, ‘That’s not how Delano is; those are outsider ideas.’ I have a record of what conservative voters might consider ‘controversial’ votes, but ultimately, I vote with my community’s best interests in mind.

For example, I’m firm on my stance on addressing COVID. I’m consistently on Instagram talking about wearing masks. There is no mask mandate in Delano, and I was one of two of five council members who voted for one. The mandate didn’t pass a few months ago because of misinformation about COVID and other perspectives. Next Monday, we’re discussing a limit on gatherings. This potential policy could garner vocal opposition if community members focus their interpretation on the regulation aspect over the potential transmission reduction.

Early on in the COVID crisis, I made the recommendations to pass a conditional eviction moratorium for rent and to waive late fees for utility bills. Since April, I have been assisting with local food distributions hosted by the United Farm Workers Foundation.

In the coming year, there are three issues I plan to focus on with the city council. One is responding to COVID-19 by implementing policies to keep workers safe and give the community more assistance. I also plan to advocate for youth. In a non-COVID world, I’d provide space for them to engage with each other outside of school. Going to UC Berkeley, I saw different types of study spaces and want to create similar spaces for youth. We also need to develop community programs to address the gang violence issue in Delano. There has certainly been a ‘tough on crime’ approach, but the approach I envision invests in youth at an early age to divert them from this path and addresses underlying issues they may experience at home. I also want to address water affordability, as the previous increase in water rates and overall utility rates has residents concerned.

At times, there are days when negative comments get to me, however, I have learned to turn to close friends for support and encouragement. They make a good support system. The young people I work with have also been through the same. It’s the same sense of invalidation because of our age, experience or political leanings. Knowing I’m not in this on my own, and knowing that we are leading the way for new policies to be implemented one day, helps. It’s a stressful, but exciting, time.

Before being admitted to UC Berkeley, I didn’t know much about it or the different opportunities I would have. Cal Day was the first time I visited, and the first time I went north of Fresno, and it was an amazing campus. I decided I would make the most of this unique opportunity to respect the sacrifices my family had made.

Throughout my time at UC Berkeley, the end goal was consistently about going back to my community in Delano and seeing how I could be of service, whether in local government or at a nonprofit. I’ve seen estimates that around 7 percent of Delano residents have graduated with a bachelor’s degree. With the experience I have gained from my time in higher education, I hope to inspire other young people to believe that they deserve the same opportunity.

Delano is filled with many hard-working and humble individuals and families. It is a small city with a rich history in the labor movement, especially in agriculture. If students hear of Delano in history courses, it is because of labor leaders like Cesar Chavez, Dolores Huerta, Larry Itliong, Philip Vera Cruz and many more. Today, we continue to have a large community of farmworkers who contribute much to our city and the country.

Unfortunately, I didn’t learn a lot about the farmworker movement until I got to UC Berkeley. Now, I actually know Dolores Huerta — I’ve seen her in person a few times, since she’s continued to be involved in campaigns for candidates and issues here locally. Because of this, one of the things I talk to young people about is the importance of ethnic studies, because many people only have had a glimpse of our history, even though they live here.

In looking back, I am grateful for the experiences and the confidence UC Berkeley provided me. I was a quiet kid in high school, sticking to sports and doing well in class. But UC Berkeley helped me find my voice through the people, the curriculum and the history it exposed me to. Being part of student government really opened my eyes to the bill process — how to get one written and passed. And BUILD introduced me to different communities, as we helped children in Berkeley and Oakland falling behind in their classes. I saw so many students struggling, but by providing extra help, we saw improvement and showed them that others care. It was a humbling opportunity. That’s the difference I hope to make back home in Delano by supporting investments in youth programs in the near future.

I hope I carry on those UC Berkeley experiences and continue learning. We always have to keep learning; I’ve taken that to heart.