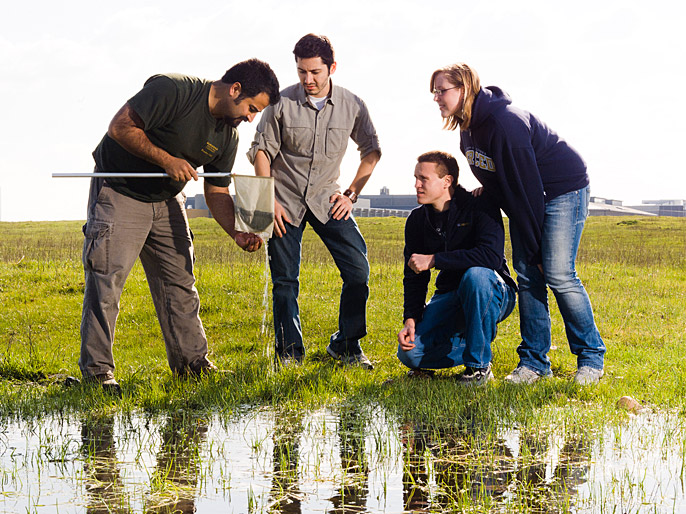 Rolling grasslands that harbor rare vernal pool ecosystems next door to UC Merced have joined the UC Natural Reserve System. The 6,561-acre Merced Vernal Pools and Grassland Reserve will enable students and faculty to study fairy shrimp, endemic plants and some of North America's oldest soils just minutes from campus. Most of California's original vernal pool habitats have been destroyed, making the new reserve a critical refuge for rare and endangered plants and animals.

"It's like taking a national monument and bumping it up to a national park," says Sam Traina, UC Merced vice chancellor of research, of the reserve's new designation. "Having it as part of the UC Natural Reserve System increases its visibility, opening it up to students and faculty from all over the world, and it anchors our commitment to the land and its conservation."

"This new reserve protects one of the most extensive vernal pool landscapes remaining in the state," says Peggy Fiedler, director of the UC Natural Reserve System. "We're deeply pleased and proud to help make this rare place available to scientists, artists, students, and classes over the long term."

The Merced Vernal Pools and Grassland Reserve is the 39th reserve in the system, a network of protected areas throughout California providing undisturbed environments for research, education, and public service. The NRS includes more than 750,000 acres, making it the largest university-administered reserve system in the world. UC Merced will perform day-to-day management of the reserve, while the NRS systemwide office will administer it via NRS guidelines. The reserve will be funded in perpetuity by UC Merced and a generous endowment from the William and Flora Hewlett Foundation.

"If you look at the key reasons for having the reserve-education, research, and our requirement to be good stewards of the land-being part of the NRS will help us do a better job of all three," says reserve director Christopher Swarth. "It's a feather in the cap for UC Merced."

The reserve's namesake pools form due to a combination of local soils and California's Mediterranean climate. Winter and spring rains deliver the area's yearly allotment of moisture. But instead of percolating into the earth, a layer of impervious hardpan near the soil surface causes water to pond. Inundation awakens a flurry of life in the pools. Many-legged fairy, tadpole, and clam shrimps hatch. California tiger salamanders emerge from upland burrows and trek to the pools to mate and lay eggs. As the days grow warmer, and the water begins to evaporate, native wildflowers bloom in concentric rings of yellow, white, and blue around pool edges. Young salamanders lose their gills, and leave their natal pools to find a welcoming nearby ground squirrel burrow. The shrimps lay eggs containing embryos in suspended animation. By June, the pools are little more than a memory, and their inhabitants are prepared for triple-digit temperatures and many months without rain.

Few species can tolerate such harsh environmental conditions. For this reason, vernal pools are strongholds of native species that have evolved to cope with short periods of inundation and many months of desiccation. The reserve hosts four out of California's 23 species of fairy shrimp, among them the endangered Conservancy fairy shrimp (Branchinecta conservatio) and vernal pool fairy shrimp (B. lynchi). Other endangered species present include the California tiger salamander (Ambystoma californiense) and 24 species of endemic, rare and protected plants. The reserve also serves as potential habitat for the endangered San Joaquin kit fox (Vulpes macrotis mutica), which occurs on nearby lands.

More than 57 bird species have been spotted on the reserve, including Swainson's and ferruginous hawks, burrowing owls and grassland songbirds. "Sometimes you encounter flocks of horned larks that stream toward you, hundreds of them, in an unending group," Swarth says.

The reserve also contains unusual topographical formations. China Hat Ridge, at the northern portion of the reserve, has soils that are between 2 million and 4 million years of age, making them some of the oldest continuously exposed soils in North America. Elsewhere on the reserve are mima mounds — low, rounded hummocks made of loose sediment — features characteristic of many vernal pool landscapes.

As an uninterrupted expanse of protected nature, the reserve is an anomaly in the agricultural landscape of the San Joaquin Valley. In fact, cattle have grazed reserve lands for the last 150 years. Dairy cattle will continue to graze the reserve as a management tool to reduce populations of nonnative European grasses and sustain the wet period of the pools.

Bringing the Merced Vernal Pools and Grassland Reserve into the NRS realizes a dream dating back to the founding of UC Merced. Lands purchased for the new campus included thousands of acres of vernal pool wetlands. Some of the most ecologically sensitive lands were designated a campus reserve, with the ultimate goal of making them part of the NRS. The reserve habitat is unfragmented and part of a larger conservation corridor that includes many adjacent rangelands also in conservation easements.

The reserve currently does not have visitor facilities, although plans are afoot to remedy that. "We're considering an interpretive center where the public can come and learn about the ancient soils, the native plants and the animals living there," says Martha Conklin, faculty director of the reserve and a Merced professor of engineering. "And we're thinking about elevated walkways, which would allow people to see the vernal pools without having to walk through mud or trample vegetation."

Faculty at UC Merced plan to take full advantage of their new outdoor laboratory. Stephen Hart, a Merced professor of natural sciences, will study how soils affect the development of grasslands and vernal pools on the reserve, among other problems.

"There aren't many places worldwide where researchers have been able to look at how soil and ecosystems develop over millions of years," he says. "The access is fabulous because I can run out and take measurements and come back to teach class; it's not an all-day commitment."

And Merced assistant professor Jessica Blois, an expert in paleoecology, plans to survey mammals on the reserve. She will comb through raptor pellets and predator scat to identify prey species, and combine that information with data from trapping. Her "live-dead analysis" will provide baseline data on the full spectrum of mammals using the landscape.

Blois says she's looking forward to bringing her Ecosystems of California class to the reserve this spring. "This class is for freshman and sophomores, so it will be nice to introduce them to the reserve right off the bat and show them it's right on their doorstep. It's a part of their heritage as UC Merced students."

The NRS was a key factor that drew Blois to UC, she says. "The NRS is an amazing resource for the University community with a national reputation, and it's great that a reserve is just outside my back door."