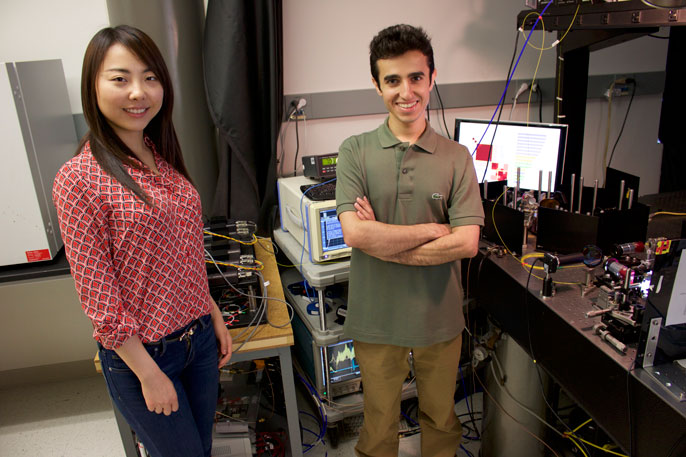 UCLA’s Claire Lifan Chen and Ata Mahjoubfar with the new device, which can image cancer cells extremely quickly and without damaging blood samples.

Scientists at the California NanoSystems Institute at UCLA have developed a new technique for identifying cancer cells in blood samples faster and more accurately than the current standard methods.

In one common approach to testing for cancer, doctors add biochemicals to blood samples. Those biochemicals attach biological “labels” to the cancer cells, and those labels enable instruments to detect and identify them. However, the biochemicals can damage the cells and render the samples unusable for future analyses.

There are other current techniques that don’t use labeling but can be inaccurate because they identify cancer cells based only on one physical characteristic.

The new technique images cells without destroying them and can identify 16 physical characteristics — including size, granularity and biomass — instead of just one. It combines two components that were invented at UCLA: a photonic time stretch microscope, which is capable of quickly imaging cells in blood samples, and a deep learning computer program that identifies cancer cells with over 95 percent accuracy.

Deep learning is a form of artificial intelligence that uses complex algorithms to extract meaning from data with the goal of achieving accurate decision making.

The study, which was published in the journal Nature Scientific Reports, was led by Barham Jalali, professor and Northrop-Grumman Optoelectronics Chair in electrical engineering; Claire Lifan Chen, a UCLA doctoral student; and Ata Mahjoubfar, a UCLA postdoctoral fellow.

Photonic time stretch was invented by Jalali, and he holds a patent for the technology. The new microscope is just one of many possible applications; it works by taking pictures of flowing blood cells using laser bursts in the way that a camera uses a flash. This process happens so quickly — in nanoseconds, or billionths of a second — that the images would be too weak to be detected and too fast to be digitized by normal instrumentation.

The new microscope overcomes those challenges using specially designed optics that boost the clarity of the images and simultaneously slow them enough to be detected and digitized at a rate of 36 million images per second. It then uses deep learning to distinguish cancer cells from healthy white blood cells.

“Each frame is slowed down in time and optically amplified so it can be digitized,” Mahjoubfar said. “This lets us perform fast cell imaging that the artificial intelligence component can distinguish.”

Normally, taking pictures in such minuscule periods of time would require intense illumination, which could destroy live cells. The UCLA approach also eliminates that problem.

“The photonic time stretch technique allows us to identify rogue cells in a short time with low-level illumination,” Chen said.

The researchers write in the paper that the system could lead to data-driven diagnoses by cells’ physical characteristics, which could allow quicker and earlier diagnoses of cancer, for example, and better understanding of the tumor-specific gene expression in cells, which could facilitate new treatments for disease.

The study’s other authors were Li-Chia Tai, Ian Blaby and Allen Huang of UCLA, and Kayvan Niazi of NantBio. The research was supported by NantWorks, LLC, the parent company of NantBio.